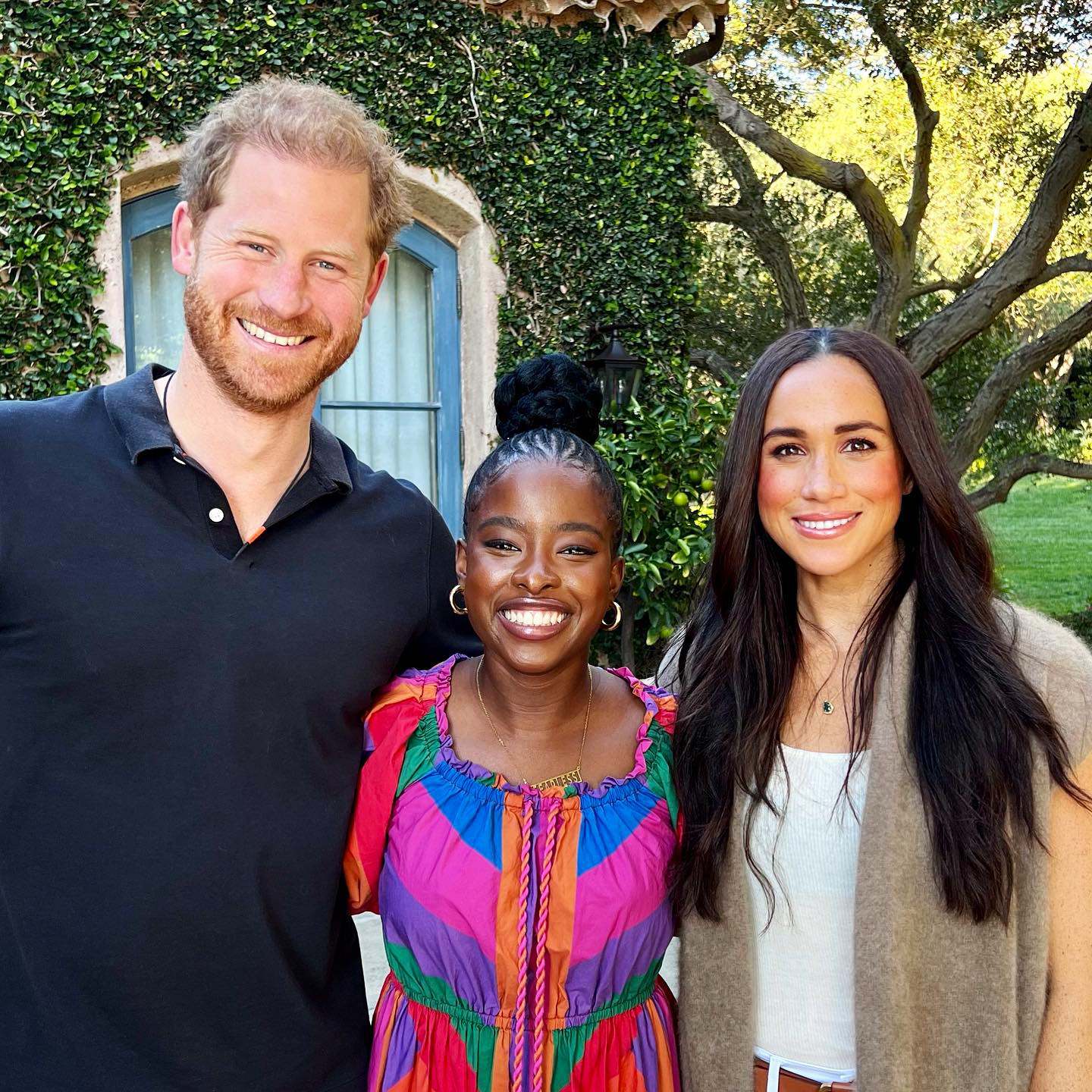 All smiles! Amanda Gorman joined Meghan Markle on the Tuesday, November 22, episode of her “Archetypes” podcast, which she was very excited about.

“Beyond thrilled to have had the honor of speaking with The Duchess on her podcast, ‘Archetypes,’ where I spoke on the power that women possess as changemakers,” the first National Youth Poet Laureate, 24, wrote via Instagram on Wednesday, November 23. “Thank you so much for having me! 💛.”

Gorman was all smiles in a multicolored frock as she stood in between the Duke of Sussex, 38, and the Duchess of Sussex, 41. Meghan, for her part, donned a grey cardigan and a white blouse, while her husband opted for a blue polo shirt.

The Hill We Climb author appeared on the penultimate episode of Meghan’s Spotify podcast, in which the When Sparks Fly actress was joined by guests Candace Bushnell and Michaela Jaé Rodriquez to discuss the “freedom and fulfillment” of living “outside of the labels we’re given by society.” Gorman had been asked to read aloud an original poem that she felt represented the episode’s theme.

Prince Harry and Meghan Markle’s Charity Work Through the Years

“I find it so inspiring to listen to women who are clear on who they are, unwavering not waffling, confident in spite of whatever barriers they may have seen in the foreground,” Meghan said while introducing the college graduate’s “surprise” cameo, noting she wanted to “bottle up that feeling of liberation when you shed all those fears of judgment [and] you sit in your authenticity.”

The Suits alum concluded the episode: “It’s so good! And did you guys hear that: ‘And where there is woman, there is forever a way.’ Truer words have never been spoken.”

Meghan launched her Spotify podcast in August, as she interviewed famous women about the archetypes they had been labeled with. The California native — who shares son Archie, 3, and daughter Lilibet, 17 months, with Harry — went on to chat with the likes of Serena Williams, Mindy Kaling, Paris Hilton and Mariah Carey about their careers in the spotlight. While listening to her guests’ stories, Meghan has also been candid about her own upbringing and experience as a member of the royal family. (The former Deal or No Deal model joined ‘The Firm’ upon her 2018 nuptials, nearly two years before she and the Spare author stepped down from their duties as senior working royals.)

Premiere Date! What to Know About Harry and Meghan’s Netflix Docuseries

“[It was] a very, very influential and inspiring woman, who — for her own privacy — I won’t share who it was with you. She said to me, ‘I know that your life is changing, but please don’t give up your activism. Don’t give up because it means so much to women and girls,’” Meghan recalled of a poignant piece of advice she received before her wedding day during an episode that aired earlier this month. “And I kept doing the work for women and girls because it matters, yes. But also, because she encouraged me to do so. And the collective voice of all of us telling each other that matters is perhaps the point. There’s safety in numbers. But there’s also strength in numbers.” 23 Oct 21
DEAR DEIDRE: DAD left half of his estate and money to me and half to…
Lifestyle
0

31 Jan 20
Student, 24, who funds her degree by lap dancing insists it's not 'seedy' and claims…
Lifestyle
0