Watching your ex move on is hard. Watching your ex move on with one of the most followed women in the world is even harder — especially when that ex isn’t shy about showing off their love. And though the former pageant queen claims to be bothered, all the times Shanna Maokler shaded Travis Barker and Kourtney Kardashian say otherwise. Ever since Kardashian revealed she was dating the Blink-182 drummer back in February 2021, Barker’s ex-wife has made it pretty clear she’s not pleased with the budding romance… even though she’s currently taken herself.

After a seven-year on-and-off-again romance, Moakler and Barker ended things for good in April 2009, though they still co-parent their two kids, Landon and Alabama. Over a decade later, the model started up a romance with fellow model and actor Matthew Rondeau after he slid into her DMs in early 2020. "I’m super happy," Moakler gushed when asked about the relationship by Entertainment Tonight in March 2021. "I’m just in a really good place. Work is fantastic and my relationship has been wonderful and I’m just having fun. I’m just enjoying myself."

And while that may be true, these shady moments make it seem like she may have just a touch of beef with Barker and Kardashian.

When She Liked A Comment Calling Kardashian A "Downgrade"

https://www.instagram.com/p/CLXuWOln4iM” data-shortcode=”CLXuWOln4iM” data-instgrm-captioned>The first time Moakler seemingly shaded her ex’s new GF was the same day Kardashian and Barker made themselves IG official on Feb. 16. According to E! News, Moakler liked a shady comment from a fan that read, "Shhhhiiiii that broad don’t got nothin’ on you. Travis downgraded big time," which was left on a pic Moakler posted just hours after Kardashian and Barker went public.

Moakler later claimed the diss was unintended. "A lot of times when I’m on my social media, I like all the fans’ comments," she told Us Weekly on Feb. 26, calling it all "an unfortunate event." She continued, "I just kind of go down and heart everything, and I didn’t even read that comment."

When She Said Barker Could Handle "Kardashian Drama"

Three days later on Feb. 19, Moakler was asked what she thought about her ex-husband’s new relationship by a reporter outside of Los Angeles International Airport. "He’s my friend and co-parent, and I want him to be happy," she said, per Page Six. "And if being with her makes him happy, and she’s happy, I’m happy for both of them, honestly. He can handle that Kardashian drama." 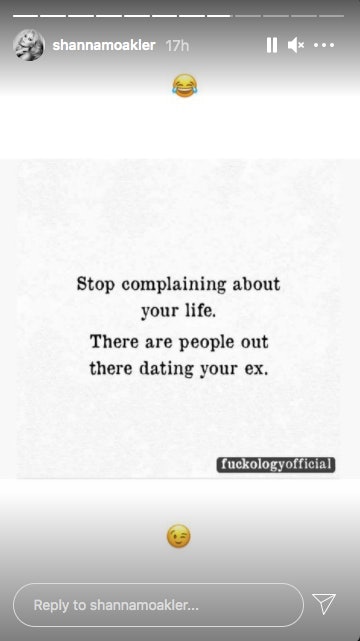 On Feb. 23, Kardashian published a Poosh blog post entitled, "How to Break the Habit of Stalking Your Ex on Social Media," and fans suspect the post was directed at Moakler. In response, Moakler took to her IG Stories to share a quote, which seemingly threw shade right back at Kardashian. "Stop complaining about your life. There are people out there dating your ex," the quote read, and on the photo of the quote, she added a crying-laughing emoji and a winking emoji.

When She Said She Couldn’t See Her & Kardashian Hanging Out

Though Moakler’s Feb. 27 interview with Us Weekly was intended to clear up the drama, it ended up creating more of it. "I’ve never met Kourtney," she told the outlet. "I’ve heard through the grapevine that she tried to reach out, but I never heard from her or anything. I would have no problems meeting her and being cordial. I think it would be nice to know the person who’s going to be spending a lot of time with my kids. I have no problem … just introducing myself and letting her know that I have no ill will. But I don’t see her and I going to the spa any time soon."

Later on in the interview, she added, "I don’t know why my name came up when they just made it official. I don’t know why my divorce 10 years ago became relevant again. I’m not very close with Travis. We’re more acquaintance and co-parents, and I don’t know her from a hole in the wall, so it’s not really for me to say [if they’re a great match] in any capacity. All I can say is if they’re happy, I’m happy for them … Those two can run off into the sunset together. I’m good!"

When She Agreed With A Comment Criticizing The Kardashians

After a few quiet weeks, Moakler seemingly agreed with a shady comment from a fan, ramping up the drama once again. After Moakler shared a since-deleted throwback IG pic on April 7 — which she reportedly captioned "my mama don’t like you and she likes everyone…. ❤️⚓️," per Cosmopolitan — a fan apparently slid into her comments section to write, "my mama likes everyone besides the Kardashians 😂😂😂." Moakler’s reported response: "mine too lol."

When She Shaded Barker’s New Tattoo

On April 9, TMZ asked Moakler what she thought about Barker’s new tattoo for Kardashian, which says "Kourtney" in curly script across his chest. "It’s beautiful… it’s nice, it’s nice," Moakler said, before adding, "Welcome to the club. He’s got a couple more on there, too." Moakler then told TMZ Barker had a tattoo with her name, just as she had one with his name. "Now it’s her turn. It’s her turn to get his name on her," Moakler said of Kardashian. When the TMZ reporter asked Moakler whether she thought the Kardashians were the tattoo types, she said she didn’t know. "I don’t follow any of them," she added.

A week later on April 16, Moakler shared a photo of Rondeau kissing her hand with the caption, "He makes me happy." When a hater commented that Rondeau had yet to post any pictures of himself and Moakler together on his own grid, she replied, "Unlike some people, my relationship status isn’t based on social media posting… I’m happy in life, not on IG," and fans suspect she was dissing Barker and Kardashian’s social media PDA.

When She Said She "Never Cared" About Barker & Kardashian 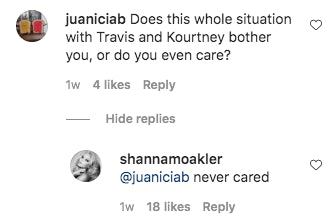 On April 26, Moakler shared a pic of herself wearing a plunging one-piece bathing suit, and one fan took this as an opportunity to ask her about her ex’s new romance. "Does this whole situation with Travis and Kourtney bother you, or do you even care?" the fan asked, to which Moakler responded, "Never cared."

Hopefully there’s an end in sight to this shade battle (though TBH, the whole thing has been v entertaining).