Are YOU guilty of Main Character Syndrome? Experts claim social media is fuelling ‘condition’ which sees narcissistic millennials and zoomers view their life as a film and they’re the star

Ever heard a song and felt like the lyrics spoke directly to you? Or watched a TV show that convinced you it was dramatising the story of your life?

Welcome to main character syndrome, an often narcissistic state of mind which sees a person act as if their life (or someone else’s) is a film – and they’re the star.

While it’s not a medical condition in the conventional sense, it’s a behaviour becoming increasingly common worldwide in a time where social media and self promotion reign supreme, and can be problematic if it means the person sees everyone else in their life as merely ‘extras’.

According to psychologist Dr. Michael G. Wetter, main character syndrome is an ‘inevitable consequence of the natural human desire to be recognised and validated merging with the rapidly evolving technology that allows for immediate and widespread self-promotion’.

On TikTok, the ‘main character’ tag has notched up more than 5.4 billion views, while #maincharacter has been featured in over 80,500 posts on Instagram, elevating it to meme status.

Videos often show young millennials or Gen Z zoomers pretending – often ironically, but not always – to be the main character in their life, doing the sort of things a protagonist in a stereotypical indie film might do.

Dr Julienne McGeough, a lecturer in Psychology at Liverpool Hope University specialising in personality and social identity theory, argues that while there’s no harm in being the main character in your own life, and having a good sense of ‘self’, when that’s coupled with narcissism it can create real issues, particularly when it comes to relationships with other people.

She told FEMAIL: ‘To some degree we are all main characters in the lives we lead. And having a good sense of who you are, as well as a sense of autonomy, is a key element of self-acceptance and wellbeing.

‘Digging deeper into the idea of “self” unlocks things such as the knowledge of who you are, interpersonal skills, and your role in making decisions about your life.

‘Narcissism is also a personality trait that we all have to a lesser or greater degree – that is how traits function. But when you couple a highly developed sense of “self” with some of the negative aspects of narcissism it can create problems. 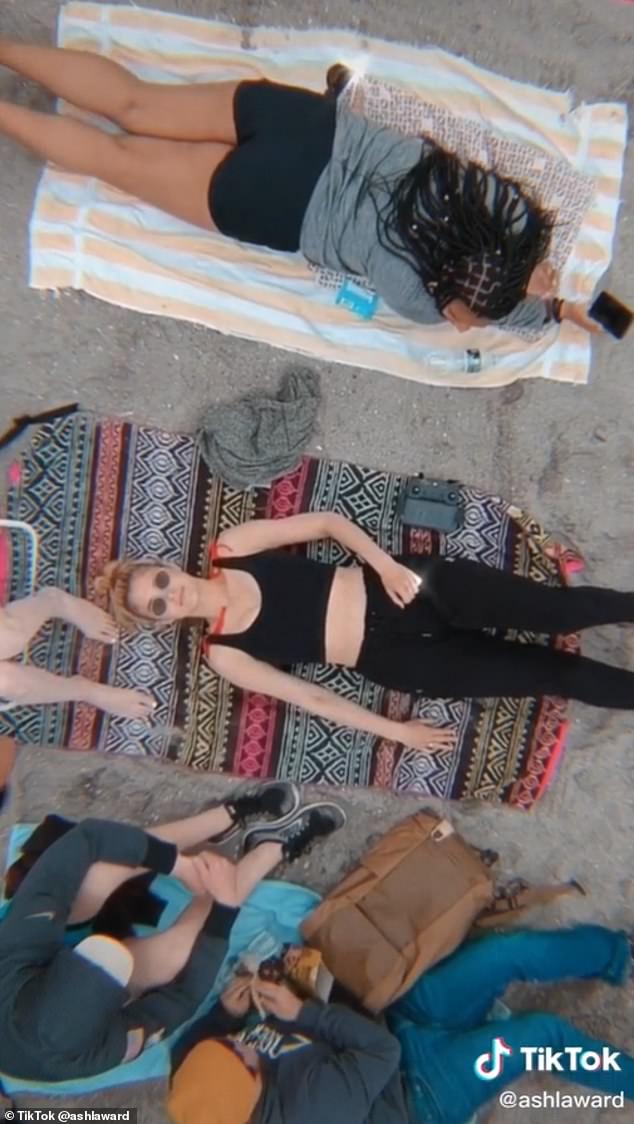 One video which went viral towards the beginning of the pandemic was shared by TikTok user Ashley Ward , in which her lo-fi voice, which sounds like that of a ‘main character’ in a coming-of-age flick, encourages people to ‘start romanticising your life’

‘For example, those who score high on the narcissism scale are unlikely to be able to understand the impact of their actions on those around them. From this perspective, it may seem that their knowledge of who they are and motivation to be loved and admired is likely to seem that they put themselves central in all interactions with others.

‘So while “Main Character Syndrome” is not a recognised psychological construct or condition, there are frameworks through which we can understand this style of relating to others.’

One video which went viral towards the beginning of the pandemic was shared by TikToker Ashley Ward, in which her lo-fi voice, which sounds like that of a ‘main character’ in a coming-of-age flick, encourages people to ‘start romanticising your life’. 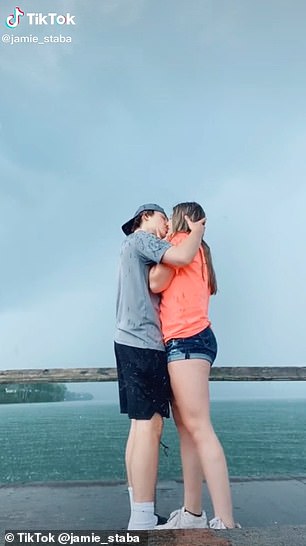 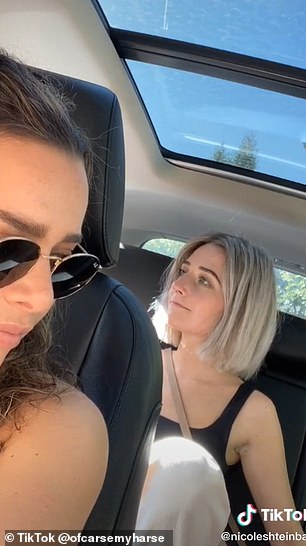 TikTokers have shared videos featuring her words and voice dubbed over Hollywood film-inspired clips, from driving through a city at night to couples kissing in the rain, Notebook style

‘You have to start thinking of yourself as the main character, because if you don’t, life will continue to pass you by,’ she says, while reclining on a beach towel surrounded by friends going about their business.

While her video carries a relatable life lesson – to now and again slow down to take stock and appreciate the mundane, a bit like the art of mindfulness – it helped kickstart a more self-indulgent trend.

TikTokers have shared videos featuring her words dubbed over Hollywood film-inspired clips, from driving through a city at night, getting in a random cab and announcing ‘I’m going home’, to couples kissing in the rain, Notebook style.

It’s progressed to the point where some now use the ‘main character’ trend to poke fun at people who appear to think everyone is as obsessed with them as they are with themselves.

The main character meme has increasingly become a tongue-in-cheek hashtag for calling out blatant narcissism, both in yourself and in other people. 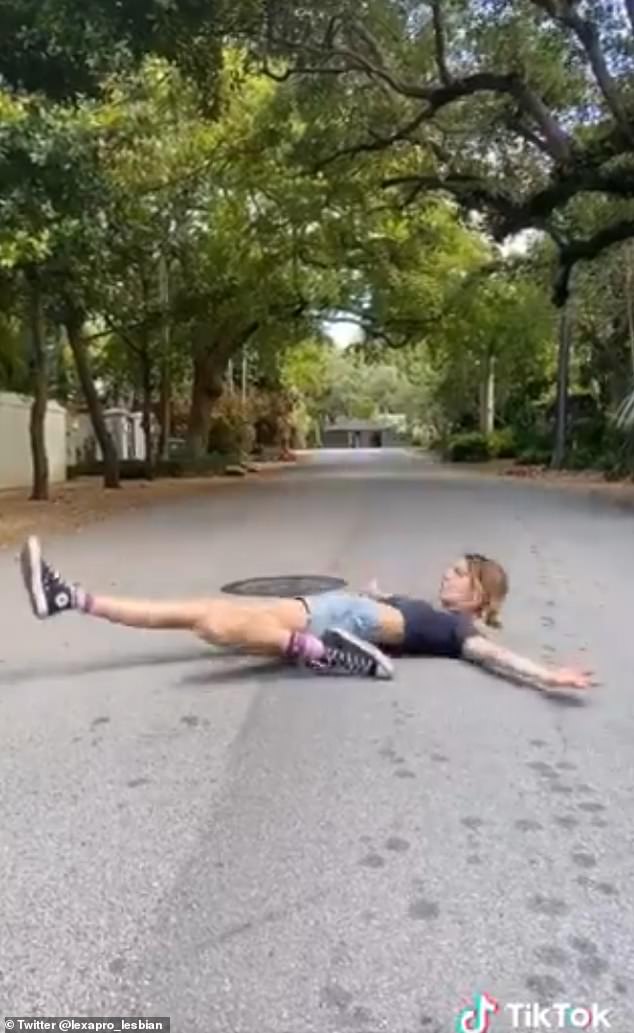 Those who are paranoid they may be coming across as having main character syndrome (or again wish to mock those that do) now implement the hashtag #notthemaincharacter – which has 333.4million views on TikTok.

One clip shared in May last year featured a TikTok user who had returned to her childhood home and took daily walks in her local area to remind her neighbours that she is ‘the main character’ in her town.

In it she lies down in the middle of the road and dances along, demanding people ‘look at her’ and give her the attention she ‘didn’t receive in middle school’.

A caption on another reads: ‘Drinking out of a wine glass and looking over the balcony so everyone on this beach knows I’m the main character.’

It’s little surprise that main character syndrome is having a renaissance on social media, given the fact they provide an individual platform to show off our lives to a global audience and build a personal brand. 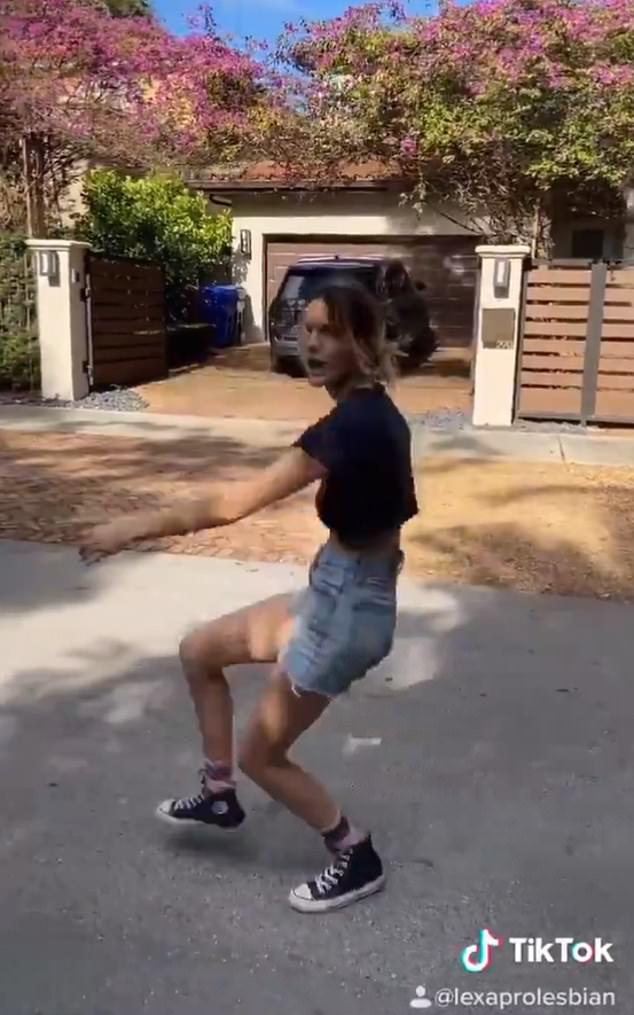 In this clip, the ‘main characrer’ lies down in the middle of the road and dances along, demanding people ‘look at her’ and give her the attention she ‘didn’t receive in middle school’

According to Oxford psychologist Dr Nelisha Wickremasinghe, author of Being with Others: Curses, Spells and Scintillation, there’s nothing wrong with the idea of seeing oneself as an actor or performer in one’s life.

‘It can be a helpful reminder that “me” is often a collection of habits, behaviours, reactions and familiar responses to situations and other people,’ she explains. ‘Sometimes, I see people “being” angry or shy or sociable and they even look like they’re acting those roles.’

Where it gets problematic, she argues, is when the desire to be ‘Main Character’ is actually a desire to accumulate likes, followers, fans, status and fame. These are characteristics of our drive brain emotion system which, at its best, leads us to get out into the world to earn money, learn, do rewarding work, and so on.

‘If that drive brain is hijacked by an “always-on” desire for recognition, status and fame, then we ignore what we’ve got in a desperate quest for what we might be able to get,’ she says.

Turning TikToker Ashley Ward’s now-famous words on their head, Dr. Wickremasinghe maintains ‘while you’re dreaming of the film star you just might become, life really will continue to pass you by’.

Professor Michael Karson of the University of Denver told Newsweek that main character syndrome isn’t necessarily all bad, but ‘unhealthy narcissism’ is behaving as if others are minor characters in one’s own drama rather than main characters in their own intersecting dramas.