Cara Santana Gets Naked to Celebrate 16 Years of Sobriety

Two photographs sit above the desk in the London studio where Australian artist David Noonan works. One is a black and white image of a face transformed by make-up into that of a fantastic bird or beast, possibly for a ballet. Noonan likes to use found images in his work: this genderless bird-person is one of his favourites. The other photograph, also black and white, is a signed photograph of German conceptual artist Joseph Beuys that Noonan found on eBay.

‘‘I was really interested in Beuys when I was studying,’’ he says. Beuys often played the shaman; he had talismanic materials such as felt and lead that he would put together in one piece after another. ‘‘I think that was what drew me to him initially,’’ Noonan says. ‘‘I’m interested in materials and how they behave, but in a different way.’’

Noonan, 50, makes collages that he then translates to large fabric formats: silk screen-prints, on subtly sepia-toned, nobbled linen, enormous tapestries. Figurative images are combined with abstract patterns, often taken from fabric prints: by setting up a dialogue between the figure and the pattern within the frame, he makes something that is both formally controlled and thematically mysterious. 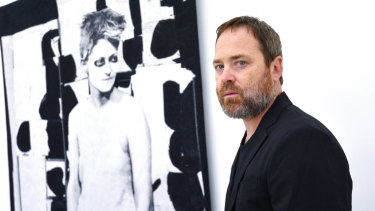 David Noonan with one of his tapestries at Anna Schwartz Gallery this week. ”The figures … are life-size so that when you see them in the space, you have a bodily relationship to them. ”Credit:Joe Armao

‘‘The pictures aren’t normally about anything specific, but more suggestive or atmospheric,’’ he says. ‘‘They’re not to be understood, necessarily.’’ To me they look like moments in a narrative where we can see there is a story, but we don’t know what’s happened, who the characters are or what will happen next. ‘‘Exactly,’’ he says. ‘‘That’s a very good way of looking at them.’’

How he picks his anonymous subjects remains intangible. Perhaps he just knows. He has a huge archive of magazine clippings and books harvested from second-hand bookshops that might only have one picture he wants. The figurative images he chooses tend towards the theatrical, but the bits of theatre that interest him are the in-between moments backstage: a dresser ensuring a costume is in place, or an expectant actor waiting in the wings.

‘‘I’m interested in these ideas of bodily transformation and gender shifts in terms of how people transform themselves through costume or make-up,’’ he says.

He never uses colour, despite his interest in costume. ‘‘I like the idea that it’s stripping back a lot of superfluous information. For me that’s colour; for other people it’s not. But it’s also that a lot of the imagery I’m gathering is already black and white from books or periodicals or magazines, so it’s staying true to the source.’’

Another rule: he never uses pictures of faces people might recognise. ‘‘It makes the images fall down if you know who they are, because they then become pinned down and can’t float in this ambiguous world that I want.’’

Noonan started making tapestries 12 years ago. He had wanted to work with tapestry for years before that, perhaps since he stopped painting and began transferring monochrome images onto textiles such as linen, but the Australian Tapestry Workshop didn’t know that when they asked him if he would be interested in designing one. 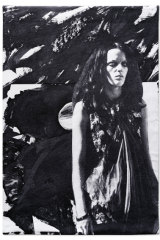 Every day for six months, a room full of women stitched away at his vast – three by two metres – design. It sounds like something out of Rumpelstiltskin, but it was more of a hipster sewing circle.

‘‘Lots of women wearing black with asymmetrical haircuts and interesting jewellery. They were really cool Melbourne women. One of them happened to be one of my mum’s friends actually,’’ he says.

He would drop in to visit. ‘‘They did such a great job, so sensitively translating the image, because none of it is done digitally at all, it’s all done by hand and by looking at the image.’’ Just as Goya would have seen his work made in the Spanish court ateliers in the final years of the 18th century, in fact. ‘‘Exactly,’’ he says. ‘‘They don’t use any modern processes.’’

The six tapestries he will be showing at the Anna Schwartz Gallery from next week are produced differently. They are woven on a jacquard loom in Flanders – that one loom is used by most tapestry artists in Europe – from digital blueprints produced by specialists based in Oakland, California. Talk about niche businesses. ‘‘Incredibly niche!’’ Noonan says, laughing. ‘‘I design the image completely. Then it’s scanned and then translated through these different processes that essentially prepare the file for the loom.’’ Where the hand-stitching resembles pixels, the jacquard tapestries have an even, velvety finish that can reproduce a wealth of pictorial detail.

This recent work includes visible signs of scissor-cut edges in the original collages. ‘‘I deliberately made these pieces in a handmade way, physically cutting them out and pasting them, a lot like some of my earlier works,’’ Noonan says. The loom precisely reproduces that roughness without adding any roughness of its own. The wool is every shade of grey.

‘‘The sort of palette I was looking for was like a photocopy, on this very cool grey scale,’’ he says. He never exhibits the original collages, even for the purposes of comparison. ‘‘I discard them. They’re a means to an end. Also it’s really to do with scale. The figures in the tapestry are life-size so that when you see them in the space, you have a bodily relationship to them, whereas the collages are about the size of an A4 sheet of paper.’’

He did try setting up his own scenarios with actors and photographing them, he says, but it didn’t work very well. ‘‘I feel like I’m much better, feel more excited and more interested, when I find pre-existing things. Actually, that’s one of the reasons I went from painting to working with found images. A lot of the paintings I was making, I was setting up these scenarios and then photographing them and translating them into paint. And they just weren’t as interesting, as strange, as what you could find that already existed.

‘‘Actually, people often say my work draws from cinematic imagery. It absolutely doesn’t. I’ve never taken one image from film, even though they have a very cinematic aesthetic because I am using a cinematic trope, which is the double exposure or superimposition – like a dissolve – which evokes that idea of a transition.’’ 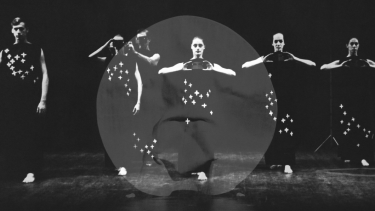 Dissolves are a comparative rarity in films now, which contributes to the waft of nostalgia in his constructed images, but they are intrinsic to Noonan’s vocabulary. In 2017 he made his own film, A Dark and Quiet Place, using a succession of images from his archive, where the old-school dissolve came into its own.

Noonan began studying art at what was then the School of Mines in Ballarat, where he grew up. ‘‘Growing up in Ballarat was tough, you know. I just didn’t fit into that world of football, it was difficult for anyone who was a bit of an outsider to that culture. Finding art was a kind of revelation really, and then I was just obsessed with it and kept going.’’

Next up, he moved to the Victorian College of the Arts to do postgraduate work. He found an international audience in his early 30s when he spent a year in an Australian studio in New York. ‘‘I kind of got a break in New York just by being there, by spending time there,’’ he says. He curated an exhibition and was reviewed in Flash Art; he had a dealer.

When he came back to Australia, he started plotting ways to get back to London, where Britart was peaking. ‘‘I loved being in Australia, but I did feel the isolation in some ways. To be connected with an international scene [from Australia] is very difficult. It was back then, anyway. It’s probably different now.’’

What is certainly true is that both Melbourne and the East End are now prohibitively expensive for artists. He makes his working space, Mackintosh Lane in Homerton, East London, available to other artists as an exhibition space when it’s not full of tapestries.

‘‘Melbourne has such a great history of artist-run spaces,’’ he says. ‘‘That’s how we all cut our teeth in a way. I think doing Mackintosh Lane was definitely looking back to my first exhibiting experiences but also a sense of community in the art world. It’s not about commerce, it’s about showing and making work and discussing it with your peers.’’

At which point, with a nod to Joseph Beuys, he goes to pack for the next day’s flight to Australia.

The 'Santa Clarita Diet' actress takes off her clothes in a mirror selfie on social media as the 35-year-old star...