It is unusual for a revival of a neglected opera to achieve the dramatic impact and clarity of message that this new co-production between Opera Australia and Teatro all Scala creates. Attila (1846) dates from Verdi’s early period and follows the runaway success of his third opera Nabucco. Even more than that work, its ostensible story, Attila the Hun’s invasion of Italy in 452, is overlaid with a strong theme of nationalism and the spirit of the Risorgimento against Austrian domination.

Director Davide Livermore has moved the action to the 1930s, mapping Attila’s cruel brutality onto that of the Italian Fascists. The barbarism shown civilians, particularly women, pointedly depicted in the opening scenes, resonates with the plight of today’s war-ravaged populations. Gio Forma’s sets with digital projections by D-Wok create a tone of epic calamity that provides the motivating impulse for the actions of the chief protagonists. 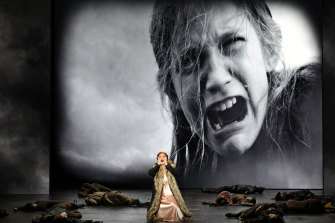 Rafael’s fresco in the Vatican of the meeting between Leo the Great and Atilla is brought to life both in projected animations and through the splendid on-stage white and black horses (the latter upstaging everyone by turning its ears critically towards orchestra and singer during loud moments with apparent discernment).

The overarching strength of staging compensates for some approaches to direction which were occasionally less successful – some of the freeze-frame moments used to halt action during arias, and the staging of the final scene that failed to keep the heroine’s coup-de-grace until the final moment. The moving around of ruined bridges during musical numbers was occasionally distracting. But these are minor details in a ​production of strong impact.

​Much of that impact is, of course, due to the cast and chorus. Taras Berezhansky’s Attila had forceful vocal focus with a well defined edge to the sound and matching dramatic presence. As his eventual nemesis, Obadella, Natalie Aroyan navigated the part’s wide vocal range with expressive colour, warmth and force. Tenor Diego Torre as her betrothed, Foresto, sang with penetrating intensity and strength and, although their voice types are very different, the duets between these two were peak musical moments.

Simone Piazzola as the Roman general Ezio has a wider-grained voice than Torre and sang with smoothness and authoritative command. Virgilio Marino provided attuned vocal support as Uldino while the horseback mounted Gennadi Dubinsky as Pope Leo I was resplendent even before opening his mouth.

As with Nabucco, the chorus has a key musico-dramatic role and delivered the opening and closing scenes with intensity and cohesive balance. Conductor Andrea Licata led this nuanced score, including much fine detail from solo wind players of the Opera Australia Orchestra, with sensitivity, flexibility and impactful dramatic pacing.

Opera Australia has suspended the remainder of its Sydney Summer season due to the Coronavirus emergency.