Australian TV icon Bert Newton had his leg amputated below his knee on Saturday and will remain in hospital for some time after an infection in his toe became ‘life-threatening’. 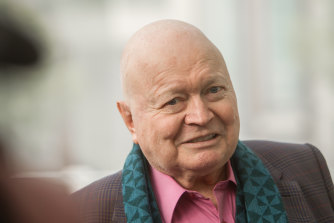 Bert Newton has had his leg amputated after an infection.Credit:Scott McNaughton

Entertainment reporter Peter Ford told 3AW Mornings that he had spoken to Patti Newton – Newton’s wife of more than 45 years – and he is in good spirits following the operation.

He said Newton had received an ultimatum from doctors that the infection could threaten his life if the leg was not removed.

“It didn’t seem particularly dramatic (in December), but subsequently a whole series of doctors and specialists and vascular surgeons have all investigated it … things have got worse rather than better,” Mr Ford said.

“The long and the short of it is that he was given the ultimatum: you only have a couple of months to live, but if you have this operation and we amputate your leg, you could have many years ahead.

“A new chapter of his life begins now, hopefully pain free, but obviously mobility will be an issue … he’s in reasonably good spirits.”

Mr Ford also said the couple were now renovating their two-storey home, so their bedroom would be downstairs, with Ms Newton currently suffering a broken ankle.

Newton was hospitalised in 2017 with pneumonia.