Britain is battle-ready for no-deal Brexit, that’s the message. Downing Street gave every department 72 hours last week to present watertight crash-out plans and woe betide any whose ideas blow up later, Dominic Cummings menaced. “Task and finish units” will stress-test each one: tremble at the military-style management speak.

In case anyone dares express a doubt that the nation is 100% ready, a rapid rebuttal unit was launched yesterday by Michael Gove to kill off any “media myths and half-truths”, reports the Sunday Telegraph. It will stamp on such “myths” as the BBC’s report that dairy cows will need to be culled if produce can’t be exported. Or similar warnings that unsalable sheep will be slaughtered when the door to 90% of the UK market slams shut on 1 November. The Cabinet Office, sounding like a Ministry of Truth, will “ensure the public and business is not being alarmed by scare stories or falsehoods”.

But out there, business associations tell a very different story. How ready are ordinary companies? Here is one that contacted me. Calico Cottage is a family-owned firm in Haddenham, Cambridgeshire, making specialist chocolate and fudge in two factories employing 50 people. Nigel Baker, its managing director, is despairing in his attempts to prepare for a no-deal Brexit: Calico exports 20% of its produce to the EU and uses imported raw materials. Trading on World Trade Organisation rules means a 20% tariff will be slapped on to his exports, a price rise he’ll have to absorb: he sells to Disneyland Paris and says customers won’t pay the extra.

Searching for what forms to fill, HMRC’s list of codes has been impossible for his complex products, where the quantity and original source of each ingredient needs a separate coding. “The paperwork is crazy,” he says. Each form has three pages, one needed for each of his 50 products with certificates of origin relating to ingredients from all over the world. “That’s what the single market did away with in 1994,” he says.

Baker’s post-Brexit transaction costs include paying a carrier £100 a time to fill out the right forms, and a customs clearance agent to check and process duty paper work: qualified agents are in short supply. The company and each of his staff need security vetting to get exports through ports with less checking, requiring him to hire a security vetting consultant too. “I spoke to Revenue & Customs for details but they said, ‘Look, we have had no indication what will be in place on 1 November.’” Baker is an experienced exporter, with an MBA from the London Business School, but the lack of information and the utter unpreparedness of government defeats him.

Here’s what makes Calico Cottage’s story particularly alarming. Baker’s MP is Stephen Barclay, the Brexit secretary, with an office just down the road. Baker asked Barclay to come round and examine the forms, to view the impossible task with insufficient information from HMRC for products like his. In mid-June Barclay sent round an assistant who spent more than two hours trying to puzzle out just one set of forms. The assistant couldn’t fathom the absent information but promised that Barclay would write a letter to HMRC for the missing details.

For an insight into the current chaos, what came back two weeks later from HMRC to the secretary of state was a pro-forma letter as if written to any member of the public: “Dear Mr Barclay, Please accept our apologies for the delay in acknowledging your case. We aim to send you a substantive response as soon as possible. Yours sincerely …” HMRC is supposed to reply within a month, but the time is now very short – and how many thousands of other exporters are caught in this backlog? 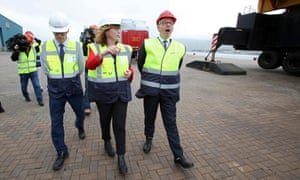 Baker wrote a shirty letter to Barclay, “as a loyal Tory voter all my life”. He invited him to “try filling out the following form which is the government’s ‘easy path to exporting to Norway’. It’s time consuming, HMRC is unhelpful and it costs a fortune to get the paperwork done. If this is your best model for Brexit try it yourself and then maybe even you and your Brexiters will think again.”

Calico Cottage already exports to Norway: if that’s the government’s best model for a future EU free-trade agreement, it’s no substitute for the single market. “You have to fill out a paper form in triplicate with carbon copies, nothing online.”

Brexit is already affecting Baker’s business as, short of warehousing, he tries to get all the Christmas orders out of the country and raw materials in before 31 October. Worse, prices are so unpredictable that suppliers such Tate & Lyle refuse to sign a fixed contract for sugar, so are free to cancel at any time.

Baker writes to his MP, “Voters like me find ourselves with no political home.” The frustration felt by so many in business erupts as his letter to me continues: “What amazes me is that the Brexit secretary and his team did not have an answer immediately … Given they’ve had three years, you can imagine that business owners such as myself are simply stunned at the incompetence of the politicians.”

The great “ready-for-Brexit” sham paraded in Downing Street with all this “task and finish” talk may be designed to convince EU negotiators that Boris Johnson is deadly serious about no deal. But Brussels knows it’s all bravado.

They too can hear the likes of Ian Wright, chief executive of the Food and Drink Federation, saying Calico Cottage’s experience is widespread. “The industry can never be ready,” says Wright. “With so many possible eventualities, it’s pinning jelly to the wall. There will be random shortages and unpredictable chaos. No commodity prices can be fixed. No one knows what haulage will cost, if queues or fear of visas make EU drivers refuse to come here. Some things will be fine, but some will be much worse than we think – the unknown unknowns.” When it turns out that the Brexit secretary and his assistants are as clueless as anyone else, all this macho “preparedness” looks absurdly shallow.

How ready are the regions? Just one example: I was talking to Bristol’s dynamic elected mayor, Marvin Rees, about council budgets and cuts, when he spread his hands out in a kind of despair at the governmental neglect. “All I’ve been given is a grand total of £210,000 by Westminster for our Brexit preparations. How far do they think that will go when they say it should cover policing food riots, and compensating problems Brexit causes for business, transport or anything else?”

The Times yesterday revealed that Cabinet Office plans include invoking the Civil Contingencies Act, with its almost unlimited emergency powers if Brexit threatens “serious damage”. Meanwhile, the Treasury seems to have spare time from its preparations to include Sajid Javid’s bizarre intention to mint new 50p coins. They will be embossed with the words “friendship with all nations”, a Ministry of Truth upside-down inversion to commemorate a no-deal Brexit with a no-£39bn crash-out that breaks friendship with our neighbours for years to come. Ready, everyone?

• Polly Toynbee is a Guardian columnist