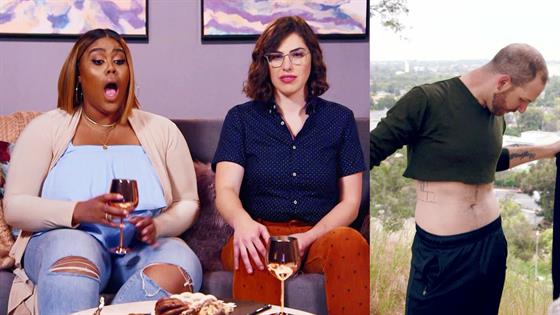 The wait’s almost over for round 2! E!’s Dating #NoFilter is heading back to late-night TV for a highly anticipated, and if this hysterical new promo is any indication, highly amusing second season. The reality-style comedy series is due to return Tuesday, August 6, at 11 p.m., so cancel your other plans accordingly.

In the spirit of its sophomore season, the upcoming premiere will treat audiences to not one, but two back-to-back episodes (the latter will air at 11:30 p.m. on Aug. 6) featuring some hilarious new dating scenarios and a couple of new commentators too.

“What do you do for work?” asks one participant at the new teaser video’s start.

When his date replies with, “I’m launching a men’s crop top line,” Nina laugh-claps so hard she needs to put down her wine glass. The first date shenanigans only kick up from there though, since the crop top designer appears to have samples on-hand for his new muse to try.

“Oh, it looks fire,” he says, but the other guy is less certain.

“It’s something, definitely,” offers his match, who is now partially shirtless in addition to being fully in nature. How’s that for an ice breaker?

See what the comedians think of their quick change in the video above!

28 Dec 20
Religious orders are supposed to provide spiritual guidance to those who join. But some of…
Lifestyle
0