RS Country Music Picks for the Week of January 18th

Here’s how Chelsea said goodbye after ten years on MTV.

It’s been a full decade since Chelsea Houska made her debut on “Teen Mom 2” way back in 2011 — and tonight, she signed off for good.

The reality star announced her departure before the finale aired, but during Tuesday’s reunion special, she gave a little more insight into her decision during what will be her final appearance on the show.

“I was losing sleep over this for weeks. To me, it got to the point where it didn’t feel right anymore, it didn’t feel it was good for my mental health,” Houska explained to hosts Dr. Drew Pinsky and Nessa Diab.

“It wasn’t an easy decision,” she added. “This has been my life, since I was 17. To say this was a scary decision would be an understatement.”

She was joined by husband Cole DeBoer, who confirmed it wasn’t a decision his wife took lightly. He added his support too, saying that, no matter what, “She knows I’m right behind her and whatever she wants to do, I’ll be right here.”

Even Dr. Drew got emotional hearing them speak, leading to tears from everyone involved.

“It came down to Aubree. You know your kids and what’s best for them. As a family, we were all kind of feeling the same way,” Chelsea added of their decision. “I cherish the open relationship I have with Aubree. When I would see some scenes of her and I alone talking, when I tell you it made me sick, I did not like how it made me feel anymore.” 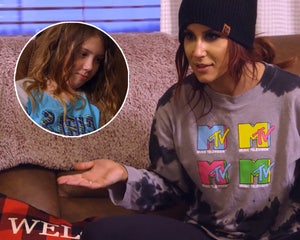 With that, Dr. Drew showed a montage of Chelsea’s time on the show — from her teen years with ex Adam Lind to her most stable situation with Cole and their kids. Again, everyone was in tears — though they all got a laugh out of her hair evolution.

Reacting to the footage, in which she said she doesn’t deserve someone as good as Cole, DeBoer got choked up. “If she ever once thought she wasn’t good enough at anything, it’s just mind blowing,” he said, “because she’s beyond good enough for anyone and I’m truly grateful for her.”

Chelsea concluded her time on the show by sending a message to her 17-year-old self. “I would just say that you are good enough and it’s gonna be okay and just keep f—ing going,” she said, “it’s going to be amazing.”