Lord mayor Sally Capp argues Melbourne Town Hall must be "more hungry" in the pursuit of revenue and cut red tape to help lift the city out of recession.

Cr Capp told the Melbourne Press Club on Wednesday that Australia's economic recovery depended on inner Melbourne's revival, and her council must fight for every investment opportunity and job. 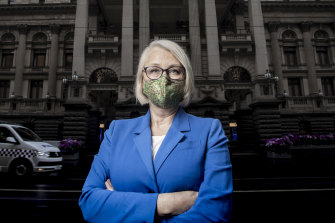 Lord mayor Sally Capp says the City of Melbourne is the “engine room of the state economy”.Credit:Arsineh Houspian

"Our mindset needs to change here at the City of Melbourne," Cr Capp said. "What would otherwise take weeks to assess and approve will need to be turned around in days.

"We acknowledge that we need to be far more responsive and far quicker and more hungry in the chase for dollars, for people and for jobs.

"Reform has never been an exciting topic, but we need to have a go at becoming a city of 'yes' and making grounds on what has been lost during this time of COVID."

Before the coronavirus pandemic struck, the City of Melbourne area had the nation's fastest-growing economy, with annual revenue of $104 billion.

Cr Capp said the federal government should do more to acknowledge the city's pain.

"We are the engine room of the state economy," she said. "We generate about a quarter of the state's GSP [gross state product], but our city economy losses represent about half of the state's forecast losses.

"Our economy was bigger than the ACT, Northern Territory and Tasmanian economies combined. That's why the nation's recovery depends on bringing Melbourne city back to life. We need to hear an acknowledgement from our federal government that they understand the disproportionate impact of this pandemic on the Melbourne city economy, and know that they will invest with us on reviving our city and our economy, because it's also an investment in the national recovery."

Nominations for next month's town hall election are due on Tuesday, but Cr Capp would not be drawn on Wednesday on who she would nominate as her running mate for deputy lord mayor, saying only that she was focused on leading the city's recovery.

Our weekly newsletter will deliver expert analysis of the race to the White House from our US correspondent Matthew Knott. Sign up for The Sydney Morning Herald‘s newsletter here, The Age‘s here, Brisbane Times‘ here and WAtoday‘s here.