Two childhood friends who ‘fancied each other’ at school but never dated have got married after spending 45 years apart in different countries.

Andrew and Karen Wilson, both now 59, were introduced when they were ‘practically forced’ together in their first year at secondary school in 1971.

The couple were originally ‘disappointed’ when they were told to sit next to each other in their registration class at Riversmead School, in Cheshunt, Hertfordshire.

Although they became friends, ‘nothing happened’ and they went their separate ways after finishing school in 1976 – until they reconnected on Facebook in 2017. 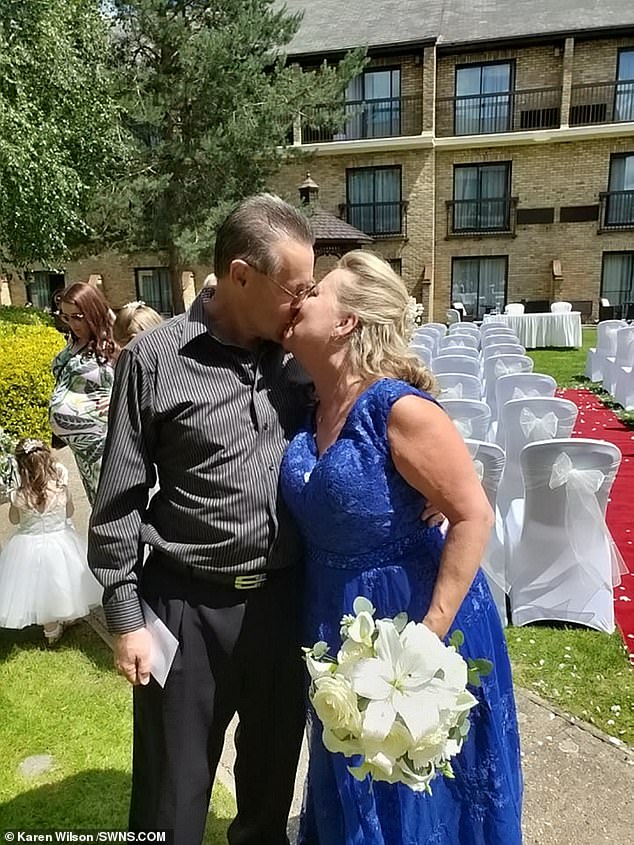 School friends Andrew and Karen Wilson, pictured together on their wedding day on Saturday, have reconnected after spending 45 years apart 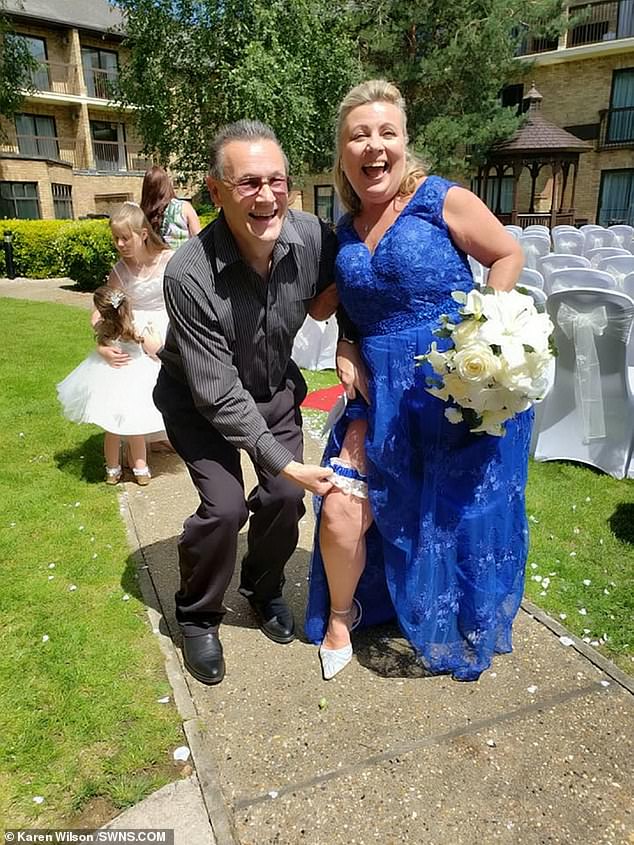 The happy couple, pictured last weekend, had sat together in a class at Riversmead School, in Cheshunt, Hertfordshire, as teenagers

Andrew, who is a chemist, said: ‘It took a while, 45 years, before I finally got the courage to ask Karen out on a date, but I finally got my girl.

‘I quite fancied Karen at school but was way to shy to say anything.’

Karen added: ‘I always thought he was so well put together but little did I know he actually liked me and was making an effort with me.

‘In second term, Andrew decided he liked me and I didn’t mind spending another term with him. 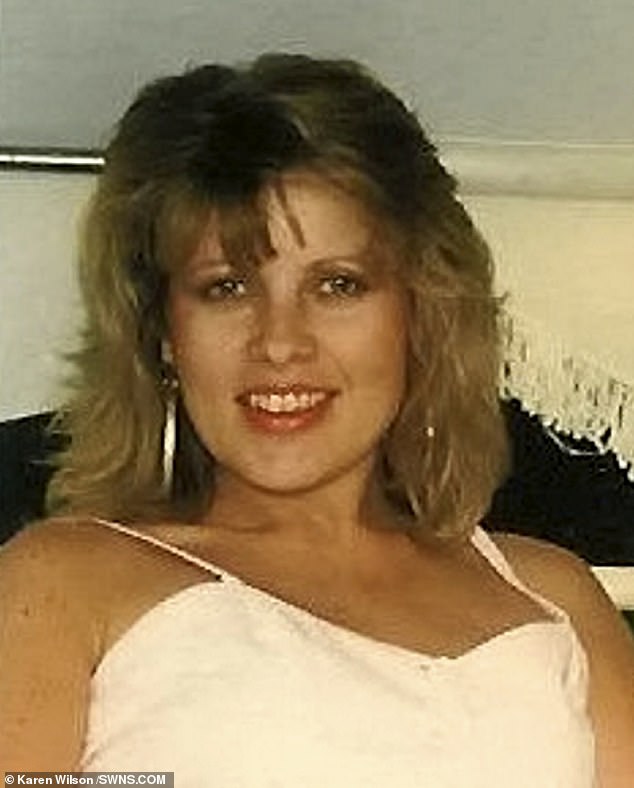 At first Karen, pictured as a teenager, and Andrew weren’t too keen on sitting together, but they quickly become friends – although there wasn’t anything romantic between them 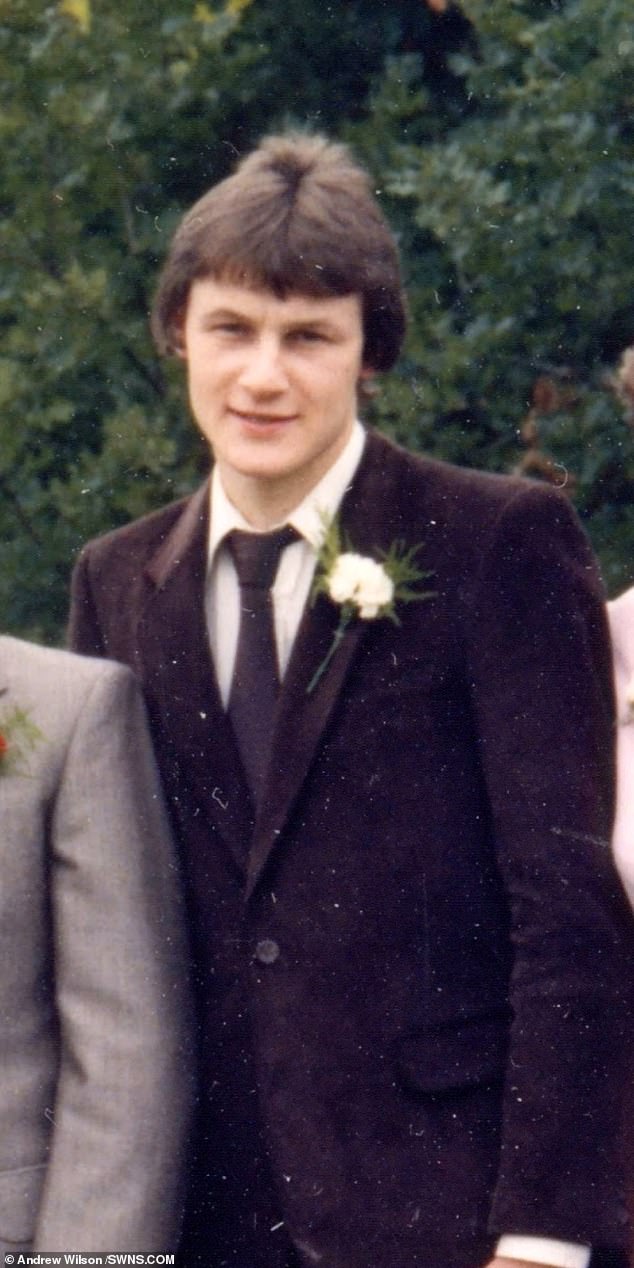 Andrew, pictured at 17, said he was ‘too shy’ to ask Karen out while at secondary school 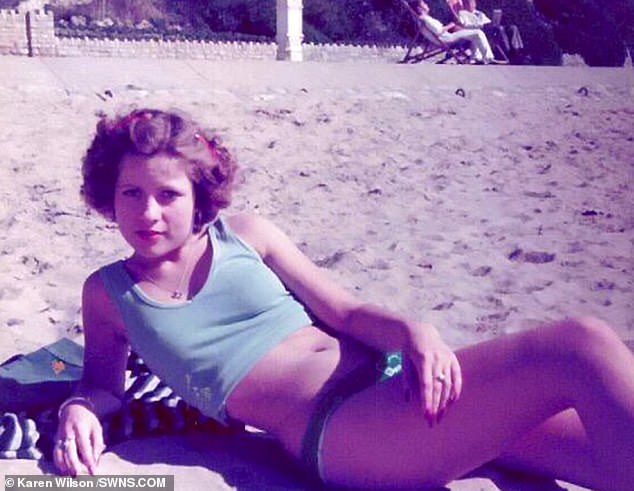 Karen, pictured as a teenager, explained how in their second term of school, ‘Andrew decided he liked me and I didn’t mind spending another term with him’

‘But because we were so young, you don’t think about love at that age, you just want to be with your friends.

‘And now I am so happy. It’s just a dream come true. I can’t believe something like this has happened to me.’

Karen and Andrew got married on Saturday after thinking they ‘were never going to see each other again’.

Andrew had moved to Tennessee, Texas, where he married and had two children, while Karen stayed in Cheshunt where she also married and welcomed two kids. 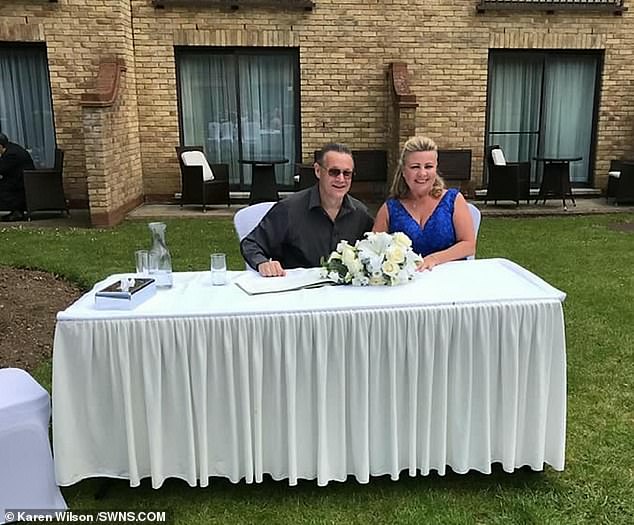 The couple, pictured during their wedding, went their separate ways after school, with Andrew moving to Texas where he married and had two children 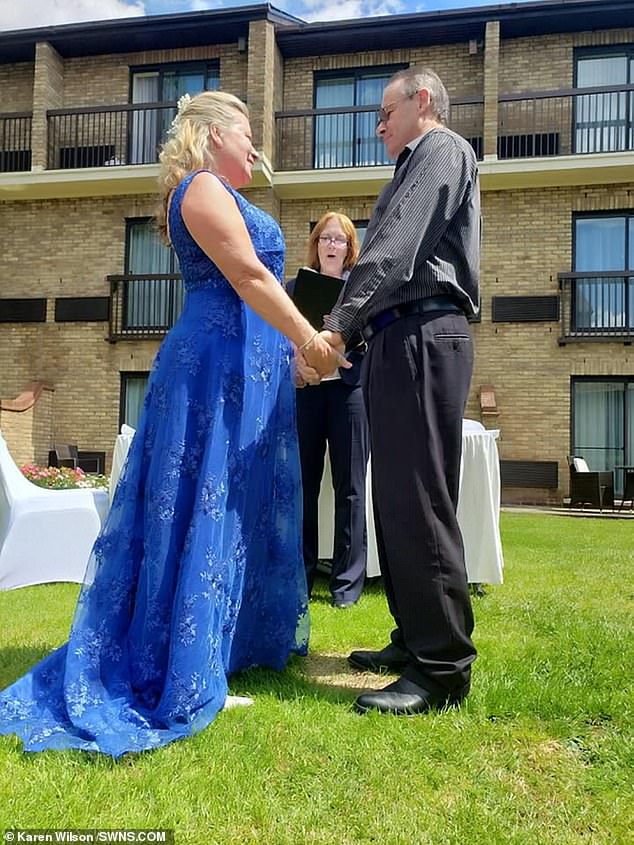 It might have taken 45 years, but chemist Andrew said he has now ‘finally got my girl’. The happy couple are pictured together on their wedding day last Saturday

However they both divorced and were living their single lives until they reconnected on Facebook in January 2017.

The pair said they would often chat ‘for hours’ until Andrew ‘plucked up the courage’ and asked Karen on a date on February 28.

To Karen’s surprise, Andrew arrived a day before to meet his soon-to-be wife after asking her pal and his sister to help him organise the meeting.

Karen said: ‘We hadn’t met each other for 41 years and we just fell into each other’s arms. 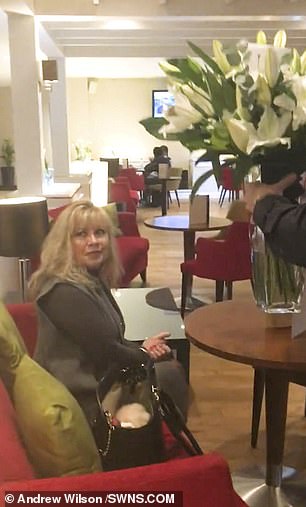 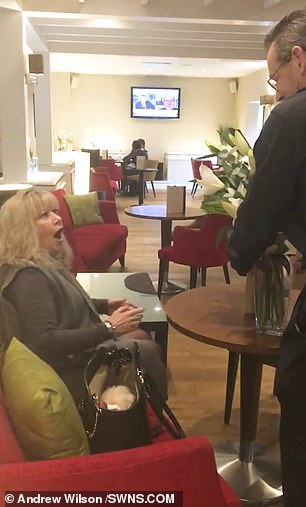 Andrew, carrying the flowers, surprised Karen, pictured sitting down, by arriving a day earlier than planned to meet her for the first time in person since school back in Febraury 2018 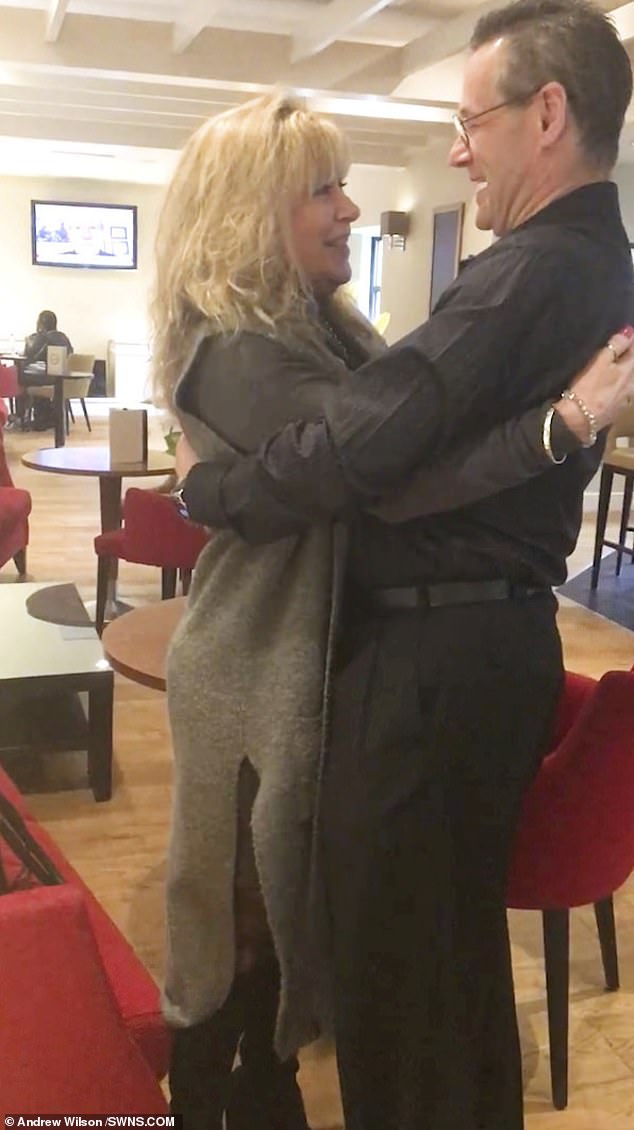 Karen, pictured embracing Andrew after the surprise meet, said she moved him into her home the very first day he arrived as they had ‘so much chemistry’ and a good relationship

‘I moved him in my house the first day he arrived here because we had already made a relationship over video call. We had so much chemistry.’

She added: ‘We had arranged to meet for dinner on the 28th. But Andrew was in contact with a friend of mine in California and she conspired for him to turn up a day early to surprise me.

‘He got his sister to join the conspiracy and he said, “Would you meet my sister on the Monday lunchtime, the day before we meet because she’s not in town when I’m in town and she’d like to meet you?”

‘So I turned at up at Marriott thinking I’m meeting his sister and this bouquet of lilies came towards me. It was Andrew. 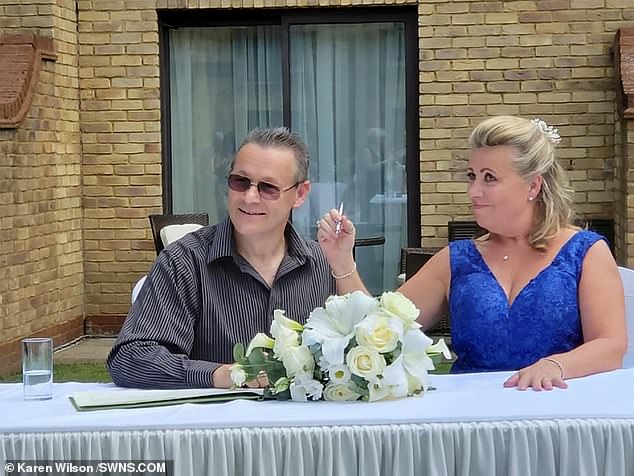 Andrew proposed to Karen, pictured together at their wedding last weekend, in June 2018 in Paris and they are now on their honeymoon in Italy 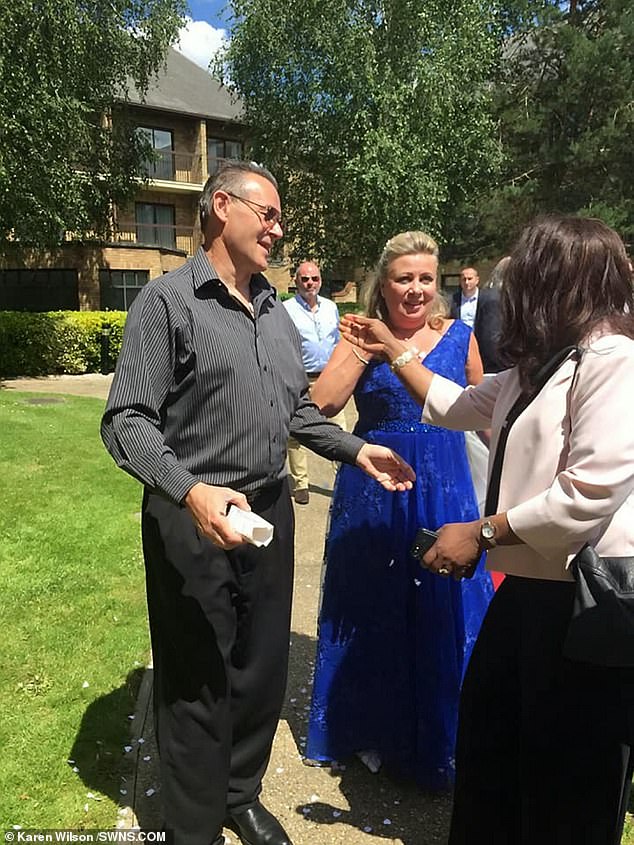 Karen, pictured with Andrew at their wedding, said she wanted other women to know that if they haven’t found the right man yet they do not need to worry and just have to ‘give it time’

‘It couldn’t have gone any better. I think if I had actually met him the day we were supposed to meet, I would have been a nervous wreck. But because it was the day before, I got surprised.’

Andrew proposed to Karen in June 2018 in Paris and the happy newlyweds are now on their honeymoon in Italy.

Karen added: ‘I just want to say to all the women out there, be careful what you wish for, because wishes do come true. 24 Jan 20
Discovery Networks, which last month unveiled a new business model that would have all but…
Lifestyle
0