Indigenous representatives in the Murray Darling Basin, federal politicians and irrigators are demanding the Morrison government deliver its overdue promise for a first nations representative to lead national water management.

The Murray Darling Basin Authority executes the Commonwealth’s responsibilities in water resource management and delivers the $13 billion Basin Plan to recover water for the environment. 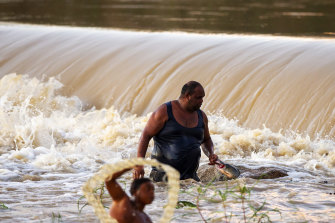 Last September then federal water minister David Littleproud announced a "historic move" to deliver a permanent Indigenous representative on the authority's board, but the position remains vacant along with two other overdue board appointments.

Murray Lower Darling Rivers Indigenous Nations vice chairman Grant Rigney said the delay was unacceptable despite logistical delays to the appointment, where Federal Water Minister Keith Pitt was held up in getting states to sign off due to elections in the ACT and Queensland putting those governments into caretaker mode.

“I find that an unjustifiable excuse, something should've been done earlier,” said Mr Rigney who represents first nations people in the southern basin.

Northern Basin Aboriginal Nations chairman Fred Hooper said it was “appalling” that an Indigenous representation was not present when the board was overseeing crucial water management decisions.

The interstate council of Murray Darling Basin state ministers meets on Friday and Mr Pitt said the outstanding appointments were being progressed.

“All of these appointments are currently being progressed and announcements will be made in due course,” he said.

National Irrigators Council chief executive Steve Whan said he recognised the difficulties of interstate consultation and ministerial changes, but “even with all those things it’s taken far too long”.

Independent senator Rex Patrick said the delay was a “disgrace” and called for Prime Minister Scott Morrison to speed up the process.

“This was supposed to be an inclusive action by the government but it is fast becoming a slap in the face for Indigenous river communities. The time has come for the Prime Minister to intervene,” Senator Patrick said.

Air Chief Marshal Sir Angus Houston was appointed chairman of the board in August.

"If this was the appointment of a representative from the cotton industry it would no doubt have been done by now,” Ms Hanson-Young said.

Labor water spokeswoman Terri Butler said she had written to Mr Pitt seeking an update on the board position.

“It is critical that the Murray Darling Basin has Indigenous voices central to its decision making,” Ms Butler said.