President Donald Trump and first lady Melania Trump greeted a group of Girl Scouts at the White House on Friday afternoon during a pandemic response event and neither one of them wore protective face masks.

It was business as usual for the couple as they flouted the Centers for Disease Control and Prevention’s recommendations to social distance and wear facial coverings to help prevent the spread of coronavirus.

The Trumps were holding hands when they arrived at the Rose Garden for the presidential recognition ceremony, where the president handed certificates to individual Girls Scouts and posed just inches away from them for photos. 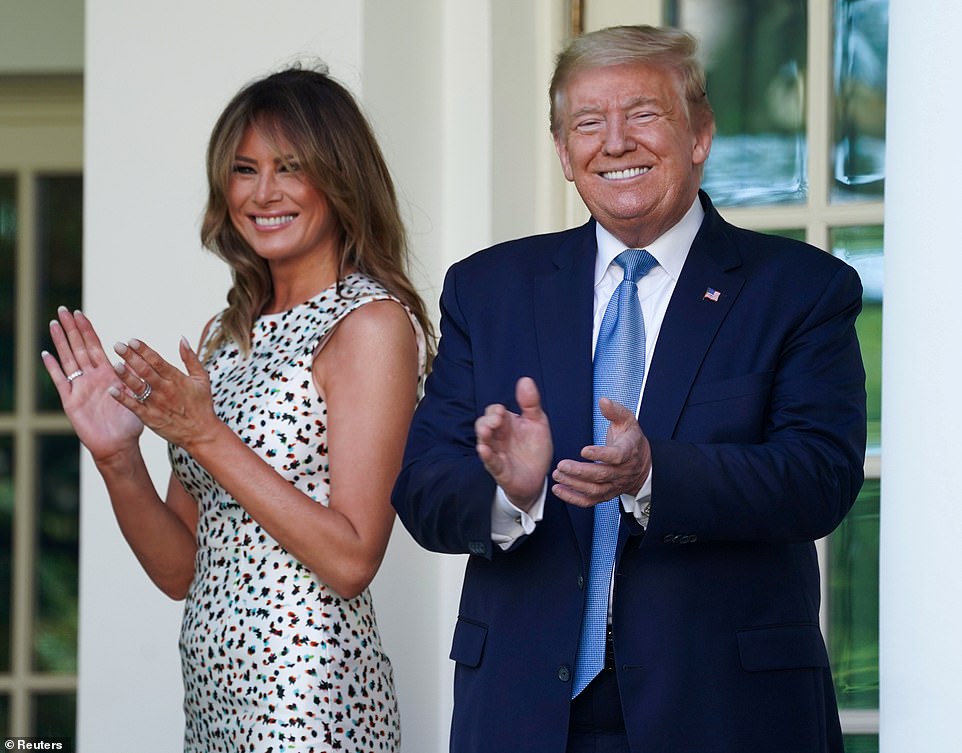 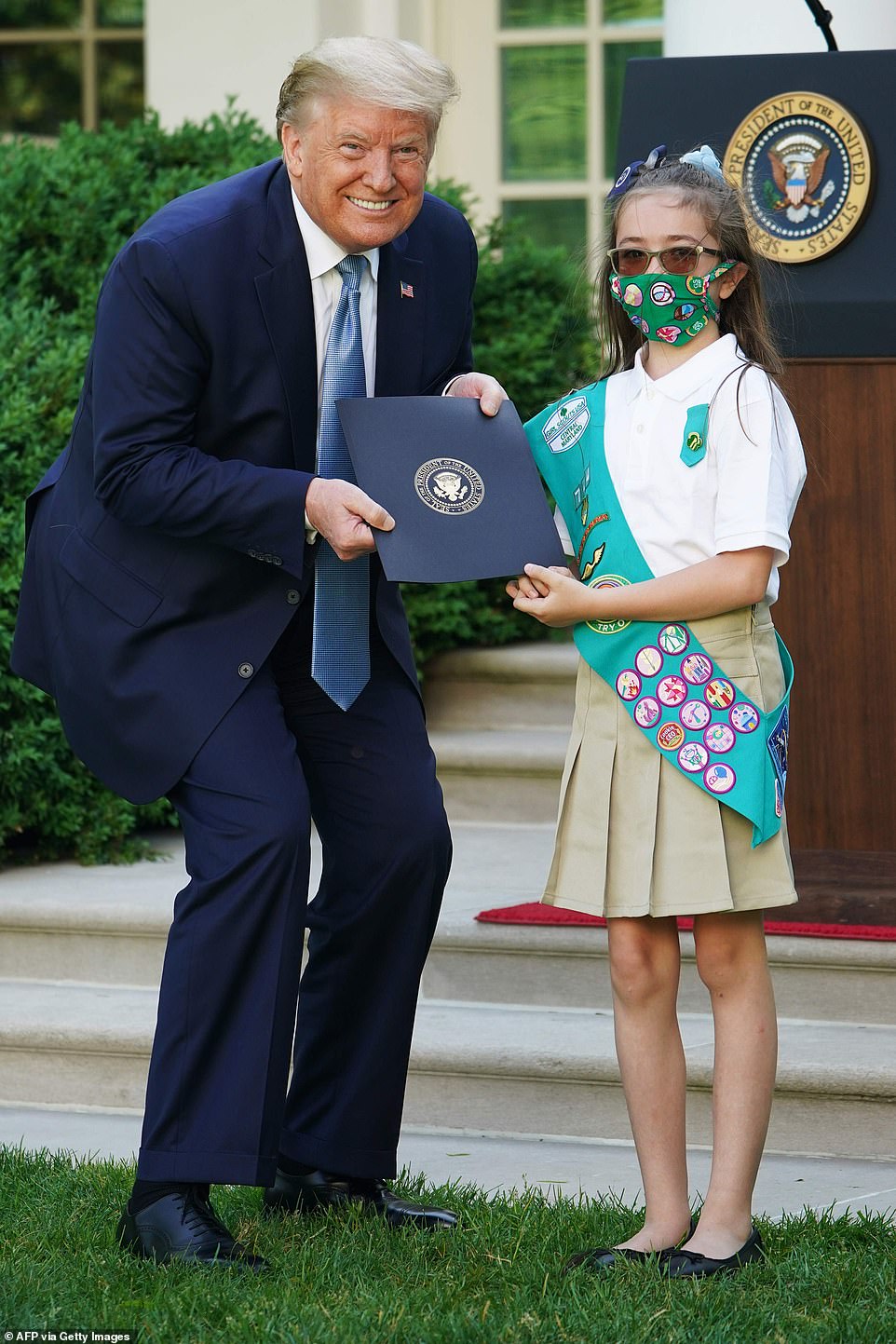 Leaders of tomorrow: A group of Girl Scouts were among the attendees, and while they wore masks, some of the adults did not, including Trump and his wife

The event was held to recognize and honor those who have helped with the pandemic response, and while the girls were wearing face masks, some of the adult attendees did not.

Ben Ross of Brackish Bow Ties was awarded a certificate for donating over a thousand face masks during the global crisis. NYPD police officer Spencer Garrett and nurse Amy Ford were also honored at the event.

They wore protective face masks while sitting in the audience, but they removed them to speak and accept their awards from the president.

Despite some people ignoring the safety precautions, U.S. Surgeon General Jerome Adams and U.S. International Development Finance Corporation CEO Adam Boehler set an example by wearing masks and bumping elbows to greet each other instead of shaking hands.

President Trump has refused to wear a face mask throughout the pandemic, even after several White House staffers have tested positive for coronavirus.

Based on her public appearance on Friday, the first lady appears to be following her husband’s lead — and going against her own advice.

Melania looked like she didn’t have a care in the world when she made a rare public appearance with her husband in the Rose Garden during the global crisis.

She donned an elegant white floral print sheath dress by Jason Wu, which she paired with poppy red heels, and she and Trump walked hand in hand when they arrived at and left the event.

Just five weeks ago she took to social media to share a photo of herself wearing a face mask while urging Americans to wear cloth face coverings in public settings and practice social distancing when possible. 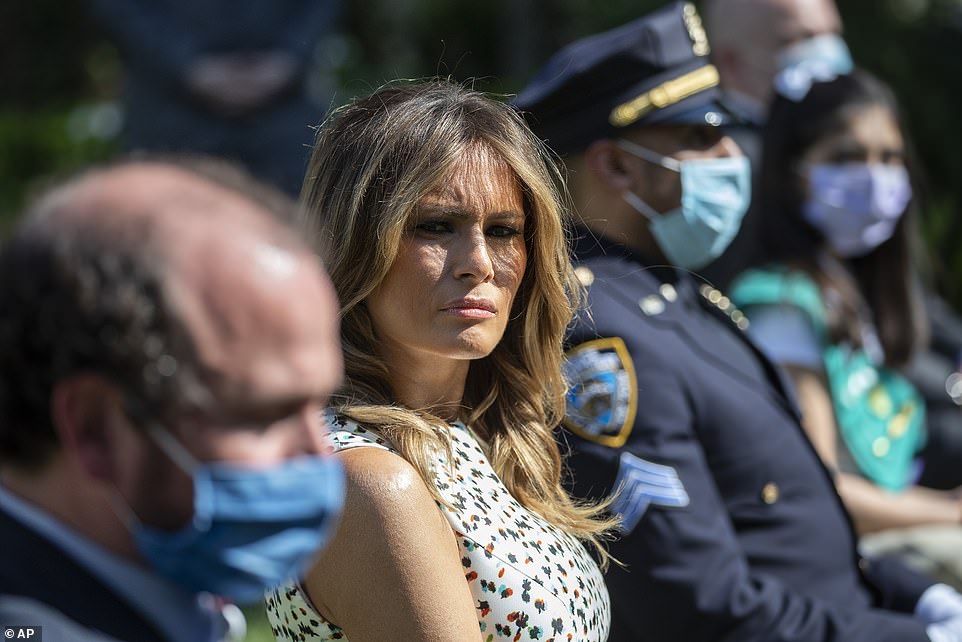 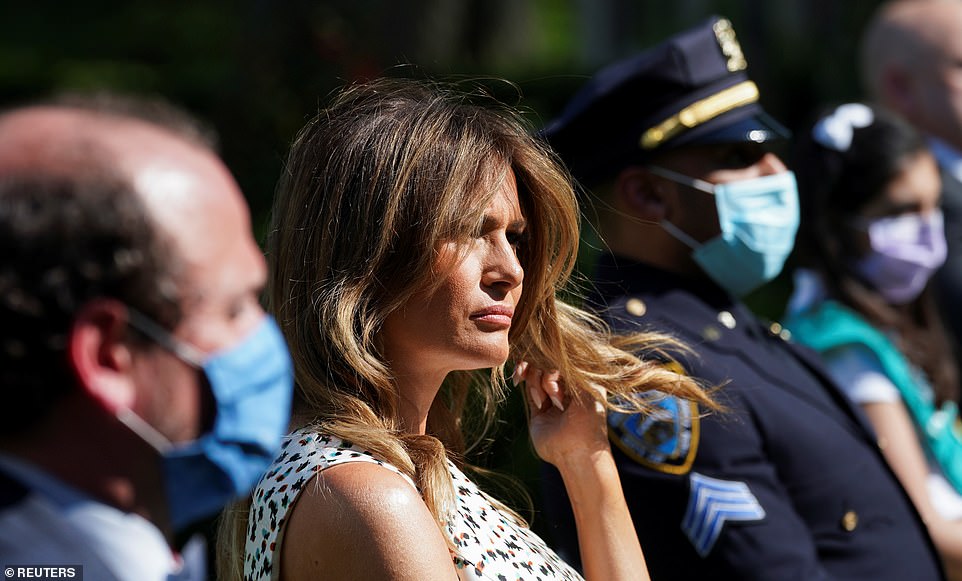 Taming her locks: The first lady brushed her fingers through her hair as she sat in the front row during the recognition ceremony 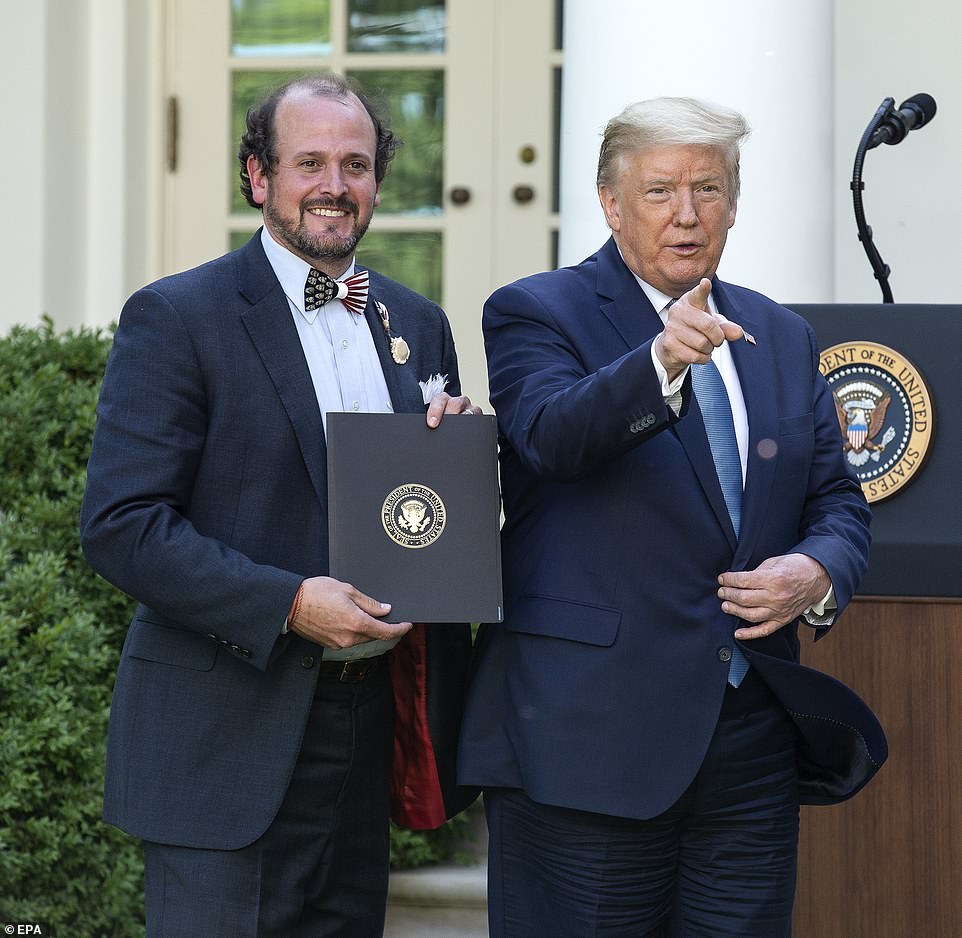 All smiles: Ben Ross of Brackish Bow Ties was awarded a certificate for donating over a thousand face masks during the global crisis. He took of his face mask to accept the award 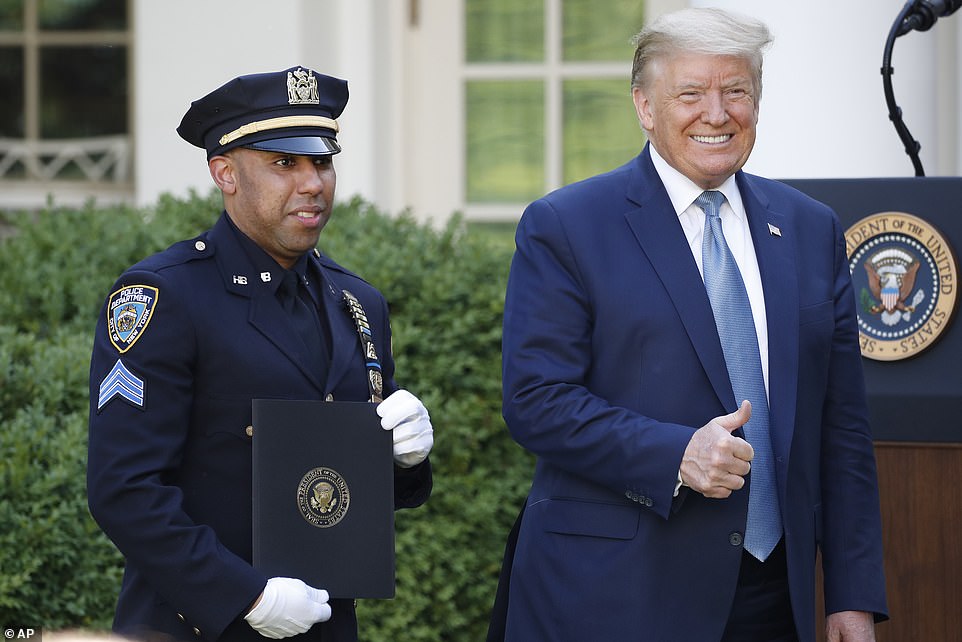 Hero: NYPD police officer Spencer Garrett was also honored at the event. Like Ross, he took off his mask to pose for pictures with the president and address the crowd 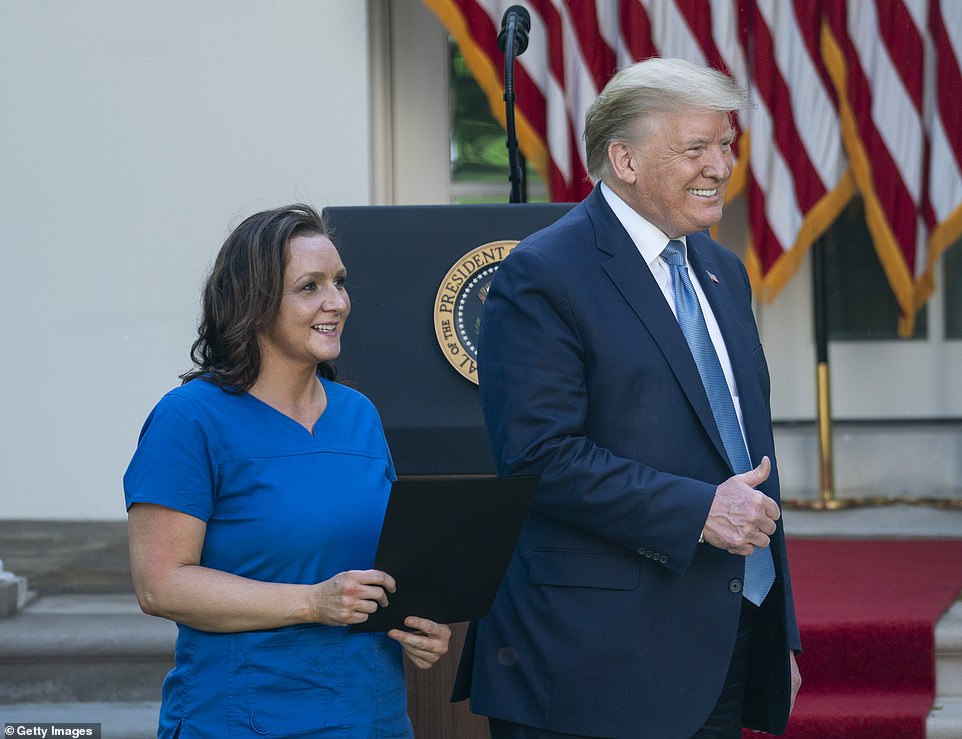 As of Friday, there have been more than 1.4 million confirmed coronavirus cases in the U.S. and over 87,200 deaths.

Trump opted not to cover his face on Thursday when he traveled to Pennsylvania to visit Owens & Minor Inc. The medical distribution facility has sent millions of N95 masks and other protective gear to hospitals and health care workers across the country

The visit marked the second time he wasn’t pictured without a facial covering as he traveled outside of the White House to visit companies helping the battle against the coronavirus.

Aside from Trump and his chief of staff Mark Meadows, everyone else wore masks, including the factory’s leaders and Trump’s son-in-law, White House senior adviser Jared Kushner.

The president originally wanted to visit the Braskem factory outside of Philadelphia where dozens of workers lived for 28 days to ensure a quarantine in order to make personal protective gear for those healthcare workers and other professionals battling the coronavirus. 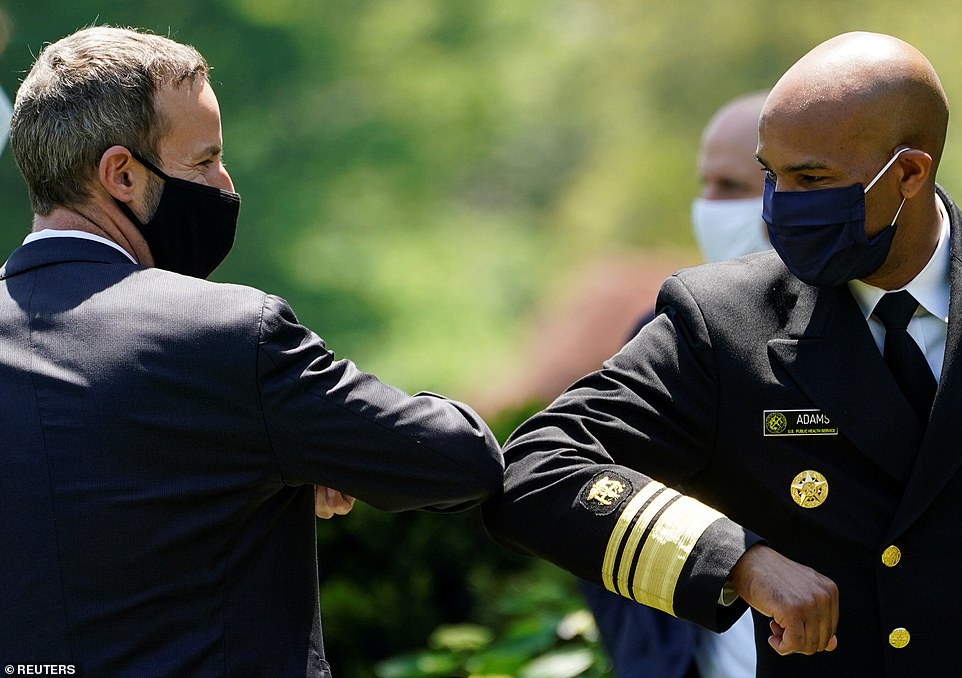 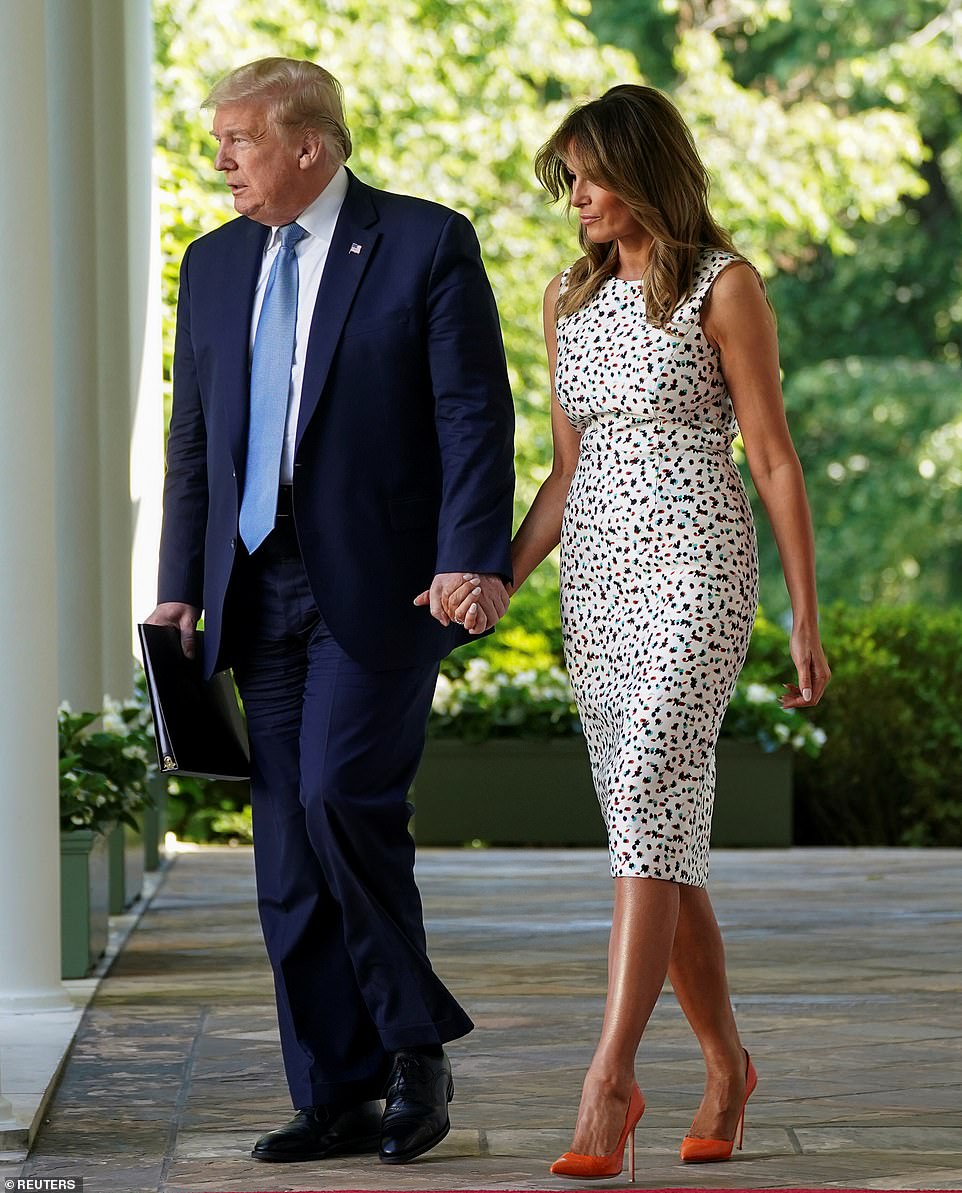 United front: The Trumps held hands as they arrived in the Rose Garden ahead of the event 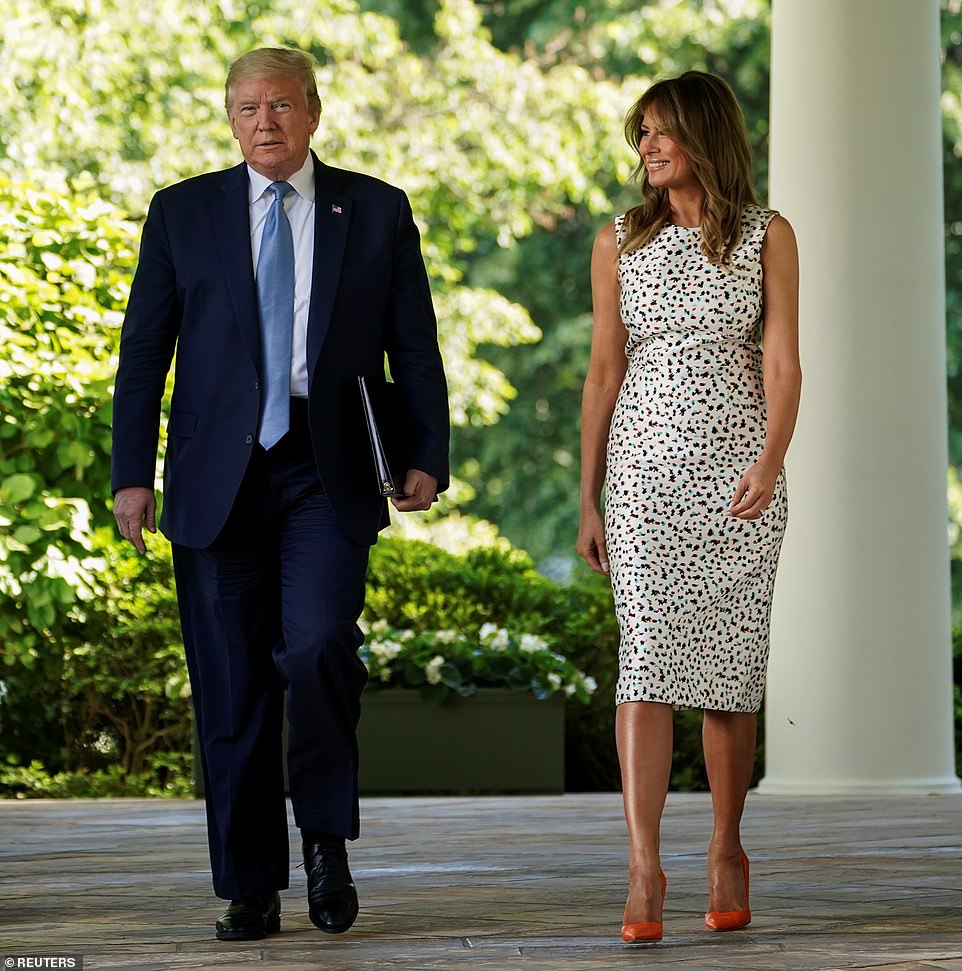 All done up: Melania donned an elegant white floral print sheath dress by Jason Wu, which she paired with poppy red heels 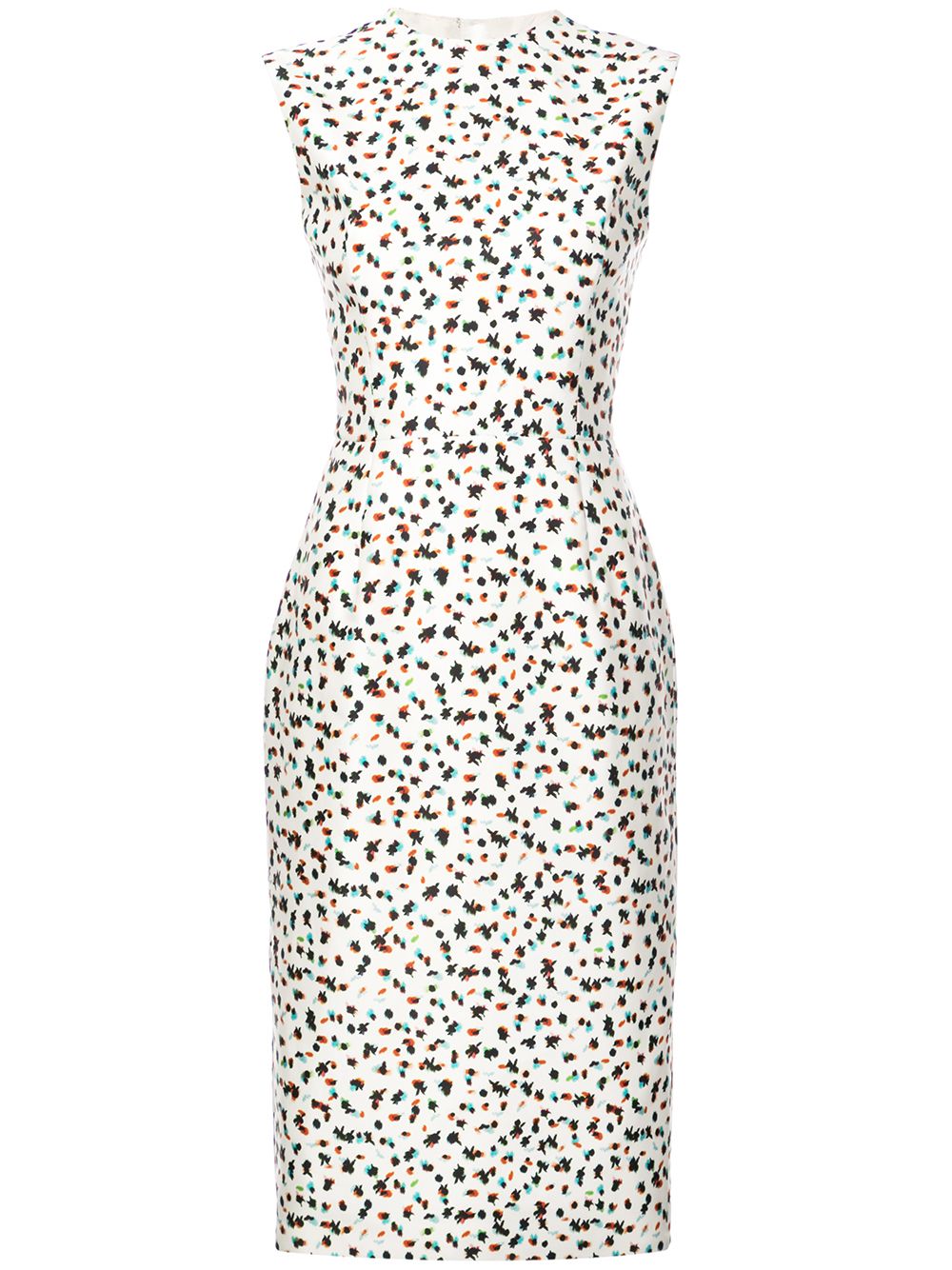 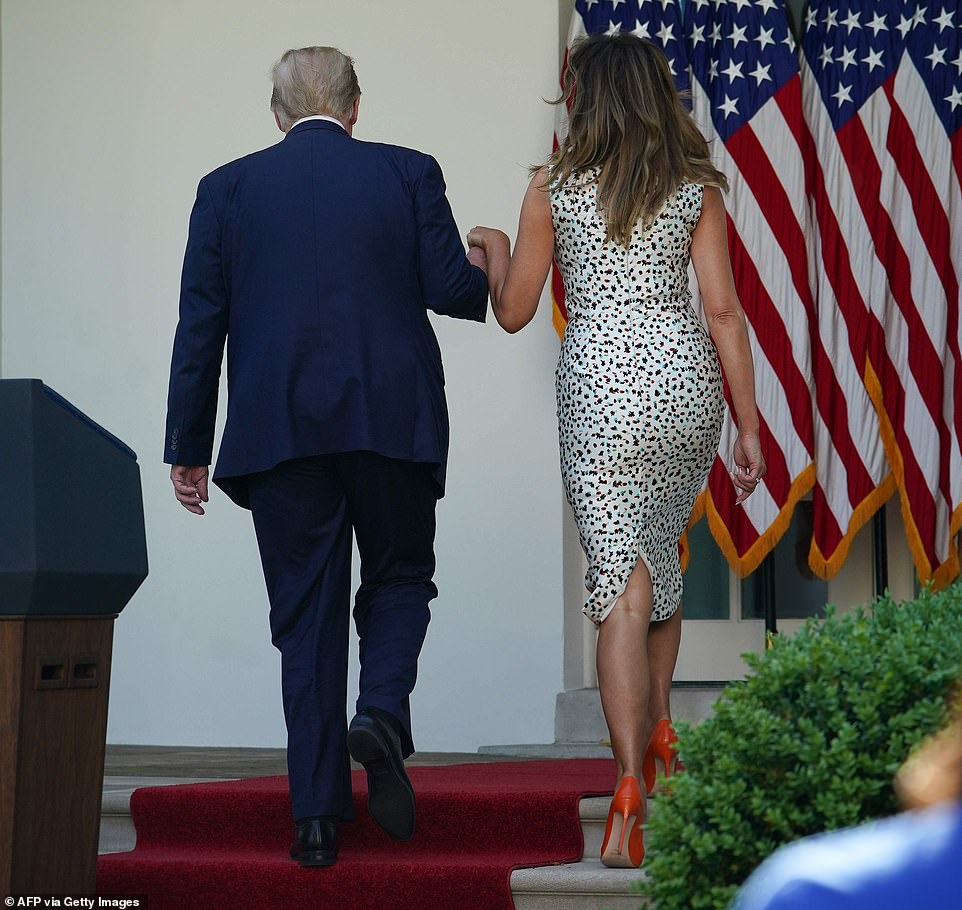 Off they go: Trump took his wife’s hand as they exited the Rose Garden together after the recognition ceremony

But factory officials were worried a presidential visit could pose a threat to the workers and the gear they are making and asked Trump to visit after the pandemic has passed, The Washington Post reported.

Trump’s eldest daughter, Ivanka Trump, publicly emerged for the first time on Friday since it was confirmed that her personal assistant had tested positive for COVID-19.

The first daughter, 38, was pictured leaving her Washington, D.C. home wearing a black face mask that she had accessorized with an American flag pin.

Shortly after she stepped out, she arrived at the Coastal Sunbelt Produce center, where she toured the facility and learned about a program that is organizing donations for food banks and non-profit organizations amid the pandemic. 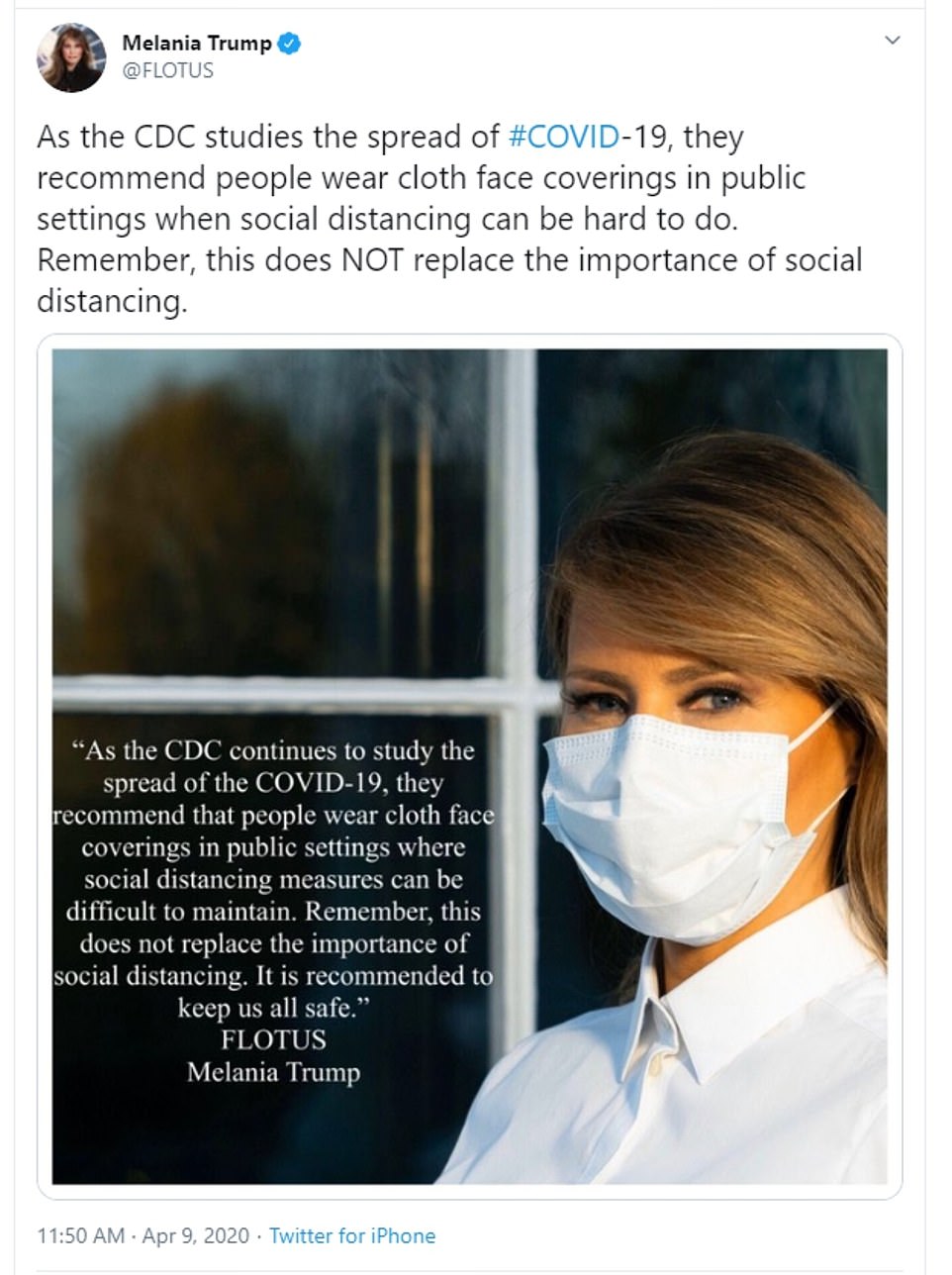 Breaking her own rules: Just five weeks ago, Melania shared a photo and video of herself wearing a face mask while urging Americans to wear cloth face coverings in public settings 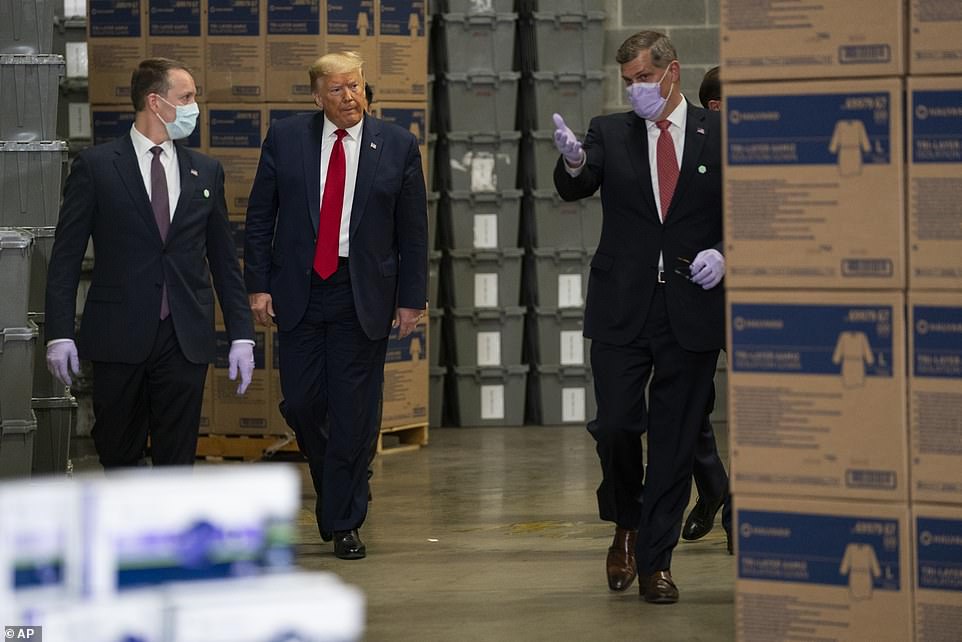 Not having it: President Trump did not wear a mask during a visit to a medical supply factory in Pennsylvania on Thursday, even as officials giving him a tour and the workers did

Staff at the facility are boxing up produce for donations as part of the Farmers to Families Food Box Program, which is providing food to Americans in need during the pandemic.

As well as taking a tour of the facility, Ivanka also addressed staffers at the center to thank them for their work in helping to ensure food can be delivered to Americans in need during this time.

Ivanka sat alongside Agriculture Secretary Sonny Perdue ahead of her speech, with both of them removing their masks before going up on stage to speak. After concluding her speech, the first daughter was seen putting her black mask back on before leaving the center.

Her appearance comes one week after it was confirmed that her unnamed personal assistant had tested positive for the coronavirus, adding to the growing number of White House personnel who have come down with the virus. 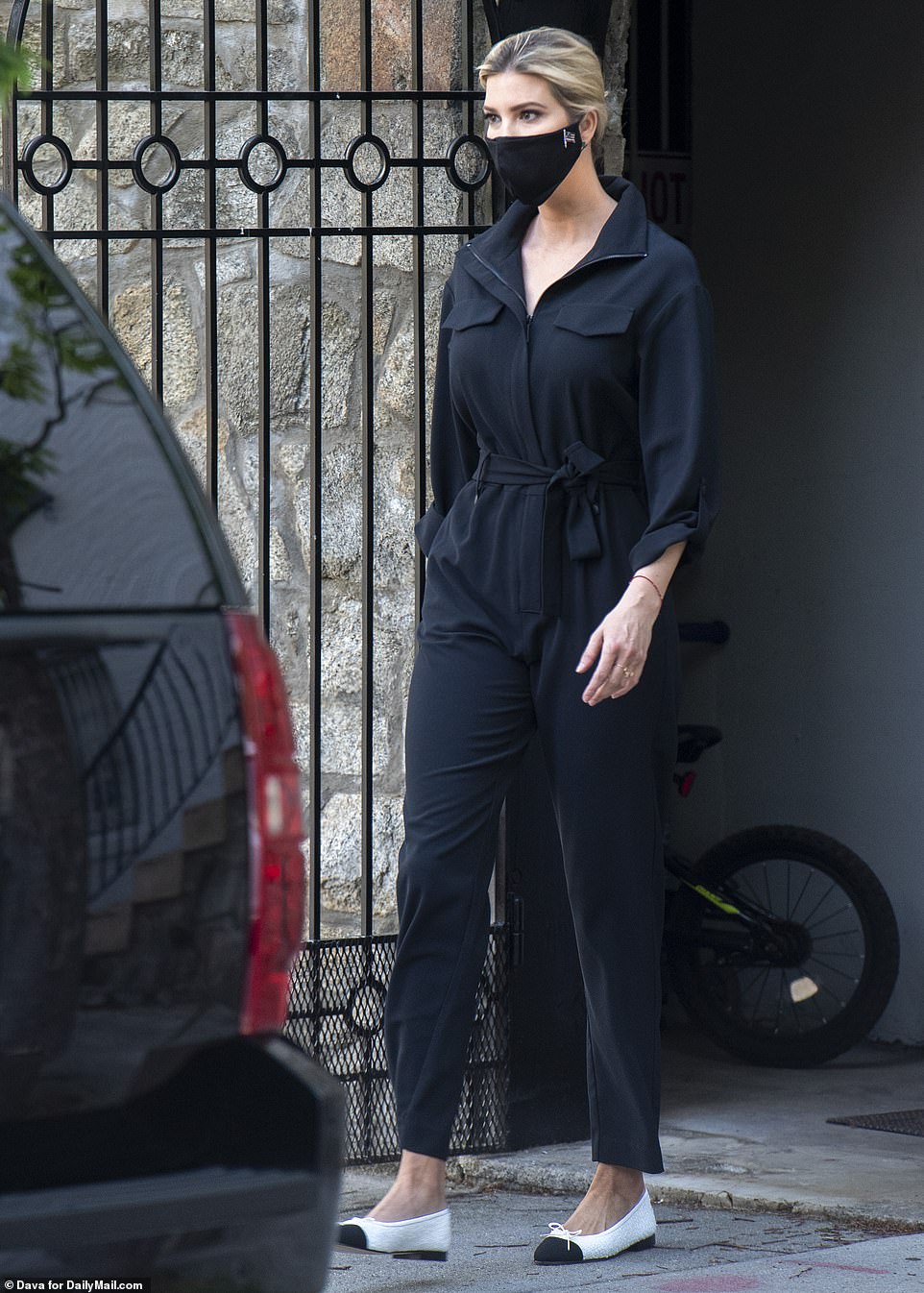 Out and about: The president’s daughter Ivanka Trump was pictured on Friday morning for the first time since it was confirmed that her personal assistant had tested positive for COVID-19 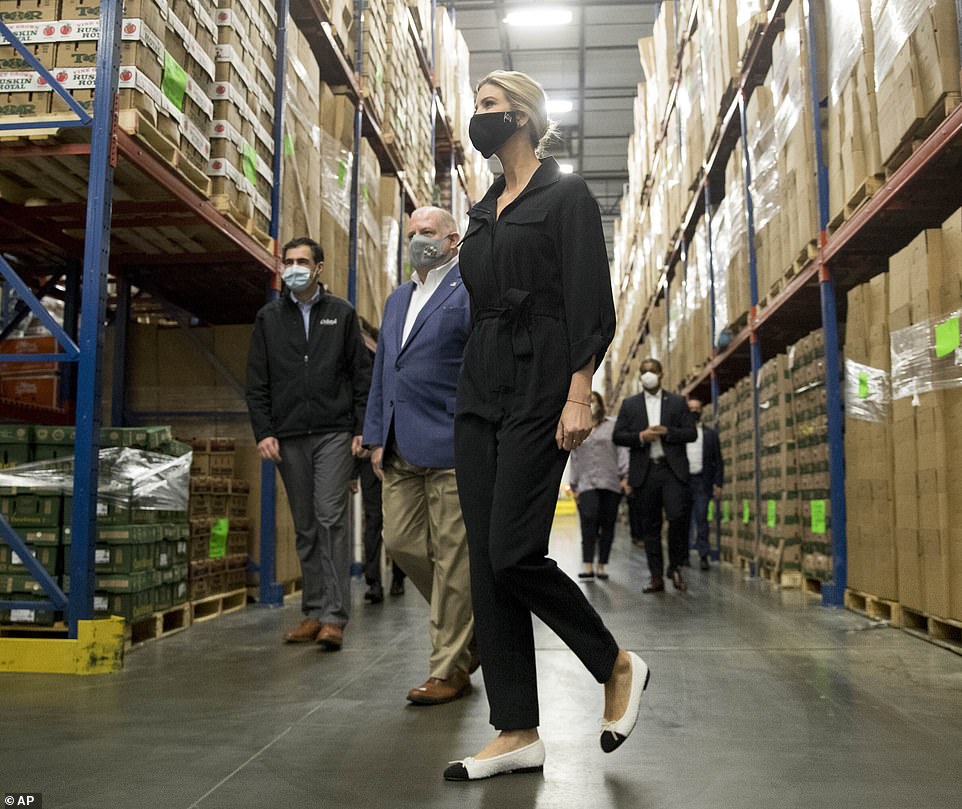 Insight: Ivanka later visited the Coastal Sunbelt Produce center, where she toured the facility and learned about a program that is organizing donations amid the pandemic 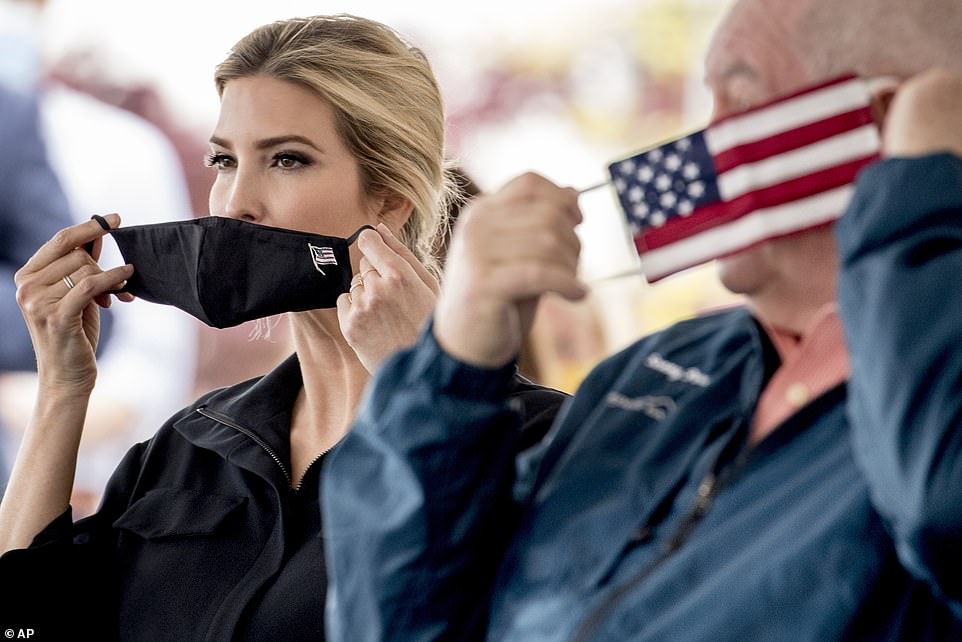 Health and safety: After addressing the crowd during her visit, Ivanka put her mask back on —  as did Agriculture Secretary Sonny Perdue, who oped for an American flag-themed covering

According to CNN, the assistant had not been around Ivanka for several weeks prior to her positive test — and both Ivanka and her husband Jared had tested negative for COVID-19.

Eleven members of the United States Secret Service have recently tested positive for COVID-19 while 23 others have recovered from the illness caused by the novel coronavirus.

Some 60 employees of the agency charged with protecting President Donald Trump and other senior government officials were in quarantine due to the outbreak as of last week, according to Department of Homeland Security documents obtained by Yahoo News.

Earlier this month, it was announced that the president and White House staff will be tested daily for the coronavirus after a Navy valet who worked in the West Wing tested positive for the illness.

‘I’ve had very little contact, personal contact with this gentleman,’ Trump said of the valet, though that is highly unlikely given that a valet’s duties include serving the president his meals, taking care of his wardrobe, and traveling with him.

30 Mar 20
Though working from home comes with its bonuses — like couches, yoga pants, snacks, and…
Lifestyle
0

5 Aug 19
Love may have abounded at the 2019 Academy Awards, but less than two months into…
Lifestyle
0 18 May 21
I blamed myself for Emily's death... but the SAS challenge helped me heal: She was…
Lifestyle
0