Dutton also accused NT Chief Minister Natasha Fyles of letting down the territory in her response to rising rates of crime and alcohol abuse in the central Australian town over the past 12 months. 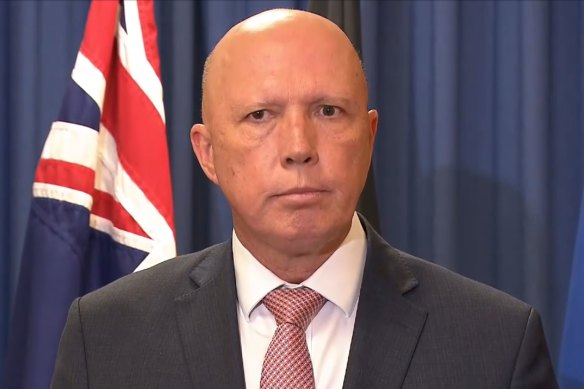 Opposition Leader Peter Dutton says he met with the PM following his own trip to Alice Springs in October.Credit:Nine News

Albanese on Tuesday met with Fyles, NT Attorney-General Chansey Paech and Alice Springs leaders to address the alcohol-fuelled crime surge plaguing the town, after which they announced alcohol sales would be subject to immediate curbs across the NT in a step towards more sweeping bans.

Dutton said on Thursday he had spoken with Albanese following his own trip to Alice Springs in October, when he met with people in town camps and Indigenous mothers in their homes.

“This is an issue that spans a long time. It’s not going to be solved overnight, and it does require bipartisan response, which is why as I say I met with the prime minister privately, I didn’t make it public, I pleaded with him for additional resources to go in,” he told a press conference in Queensland.

Albanese told a press conference in Canberra on Thursday he would not be engaging in partisan politics.

Voice to parliament co-designer Professor Marcia Langton has also said NT Indigenous leaders pleading for an extension of Stronger Futures laws banning alcohol in some communities would have been listened to had the advisory body been constitutionally in place.

Langton, a University of Melbourne academic, told ABC television on Thursday that Aboriginal health services and Alice Springs leaders wrote to politicians pleading for the alcohol restrictions, which expired in July, to be extended to allow them to come up with their own solutions.

“Nobody listened to them. This is why we need the Voice, and this is the case across Australia,” Langton said.

University of Canberra chancellor Professor Tom Calma, also a co-designer of the Voice and the 2023 Senior Australian of the Year, agreed with Langton.

“That’s where the community is working towards these decisions,” Calma said, offering the example of an Aboriginal community in Fitzroy Crossing creating its own plans to limit alcohol sales.

Dutton said he also raised the suggestion of a boarding school for primary school students “where kids could go and be safe, so they could go to school during the daytime”.

Calma said the Red Dirt Curriculum report for remote education had already found communities were better off establishing localised curriculums that met the needs of that particular community “rather than a standardised curriculum that is better suited to an urban environment”.

“Education is a state responsibility,” he said.

Cut through the noise of federal politics with news, views and expert analysis from Jacqueline Maley. Subscribers can sign up to our weekly Inside Politics newsletter here. 11 May 21
Prince William and Catherine, Duchess of Cambridge, are celebrating a decade of marraige. The pair…
Lifestyle
0