Eric Clapton has announced that he won’t perform at venues that require proof of coronavirus vaccination for people to attend, becoming one of the first major artists to rebuke a safety precaution being used for the return of live music.

The musician, a vocal critic of the British government’s response to the pandemic, responded to Prime Minister Boris Johnson’s announcement this week that vaccine passports would be required to enter nightclubs and venues. Clapton said he was “honour-bound” to push back against the public health measures. 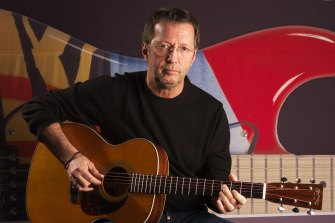 Eric Clapton, pictured in 2003, has been a vocal opponent of lockdown restrictions since the start of the pandemic.Credit:AP

“I wish to say that I will not perform on any stage where there is a discriminated audience present,” Clapton said in a statement shared on the Telegram account of Robin Monotti, an Italian architect and fellow critic of the government’s response to COVID-19. “Unless there is provision made for all people to attend, I reserve the right to cancel the show.”

The message was shared along with a link to Stand and Deliver, his anti-lockdown collaboration with Van Morrison. The song, described by the Los Angeles Times as “extremely meh,” asks, “Do you want to be a free man / Or do you want to be a slave?”

Clapton’s representatives did not immediately respond to a request for comment.

His dismissal of the safety measure comes as live music is beginning to return to venues worldwide, signalling some normality despite rising concerns surrounding the highly contagious Delta variant. In the United States, artists such as the Foo Fighters and Bruce Springsteen have put on concerts and Broadway shows, respectively, in which audience members were required to show proof of vaccination. Some have applied this to the ticket price of shows, such as a Florida concert promoter who offered $US18 tickets to anyone who is vaccinated and charged $US999.99 for everyone else.

Britain is currently a global hotspot for infections. The country’s seven-day rolling average of daily new reported cases is at 47,723, according to data compiled by The Washington Post – an increase of 28 per cent in new cases in the last week. The US Centres for Disease Control and Prevention raised its COVID-19 risk assessment for Britain to the highest level this week, and the State Department issued a do-not-travel advisory.

Despite a sharp rise in coronavirus cases propelled by the Delta variant, there are far fewer deaths and hospitalisations in Britain.

On Monday, as the country ended almost all legal requirements to maintain coronavirus social distancing measures in England, Johnson urged venues and nightclubs to “proceed with caution,” noting that the pandemic “is far from over”.

“I would remind everybody that some of life’s most important pleasures and opportunities are likely to be increasingly dependent on vaccination,” Johnson said. “There are already countries that require you to be double jabbed as a condition of quarantine-free travel, and that list seems likely to grow. And we are also concerned – as they are in other countries – by the continuing risk posed by nightclubs.”

Clapton, 76, has been a vocal opponent of lockdown restrictions since the start of the pandemic. He has noted how he found anti-lockdown “heroes” such as British politician Desmond Swayne and Morrison, whose lyrics, he said, “echoed in my heart”. The guitar virtuoso also allegedly lent a van to a band that is performing throughout the United Kingdom to protest restrictions.

The backlash to his stance caused many on social media to resurface the racist diatribe he made at a 1976 concert in which he called to “keep Britain White”. (Clapton has blamed his substance addiction for his behaviour, and has since expressed remorse.) He claimed in May that he experienced “disastrous” side effects after he took both doses of the Oxford-AstraZeneca vaccine, saying his “hands and feet were either frozen, numb or burning”.

“I feared I would never play again,” he wrote in a letter that was also shared to Monotti’s Telegram account. Clapton said he should “never have gone near the needle”.

While Clapton’s next show in Britain isn’t until May 2022, he does have a handful of US shows scheduled for September. The arenas in which he is scheduled to play in states such as Texas and Florida do not appear to be enforcing proof of vaccination for audience members.