Party girl, 27, who felt ‘suicidal’ after nights drinking until 5am reveals her ‘life was saved’ when she converted to Islam and chose to throw away racy clothes, remove her false nails and delete saucy social media snaps

A former party girl has revealed how converting to Islam ‘bettered her character’ and saved her from a ‘dark place’ after her hedonistic lifestyle left her feeling suicidal.

Persephone Rizvi, 27, from Huddersfield, told how she used to spend her weekends getting into fights, drinking until 5am and waking up with a hangover before converting to Islam seven years ago.

Speaking on BBC Three documentary This Girl’s Changed, Persephone, who now wears a hijab, said everything from her fashion sense to the way she acts has changed as a result of finding Islam. 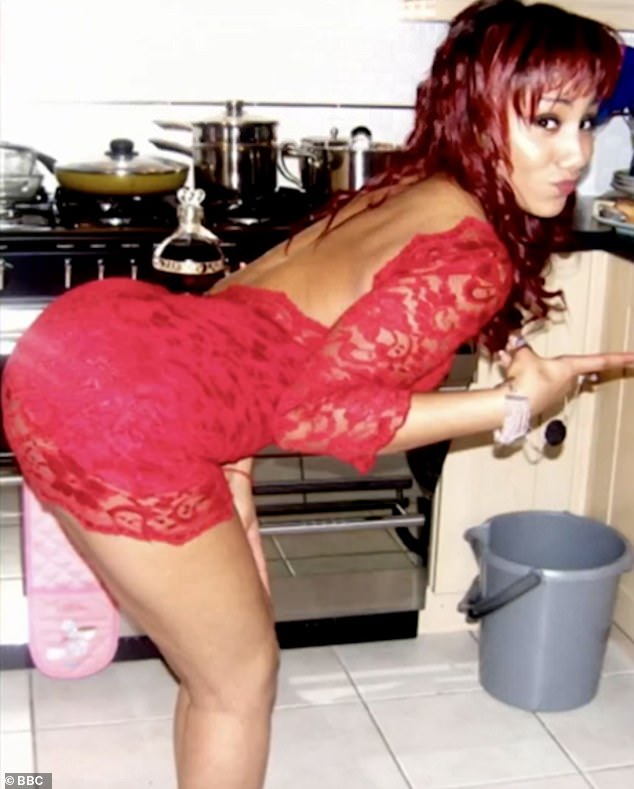 Persephone Rizvi, 27, from Huddersfield, spent her weekends getting into fights and drinking until 5am before converting to Islam seven years ago. Pictured, during her partying days 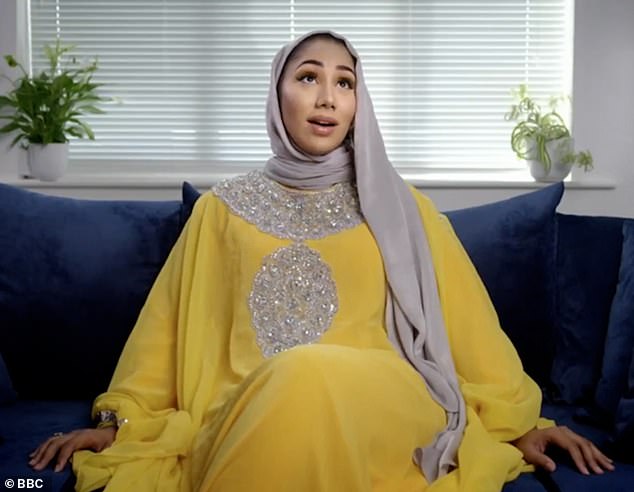 Speaking on BBC Three documentary This Girl’s Changed, Persephone, who now wears a hijab, said everything from her fashion sense to the way she acts has changed as a result of finding Islam. Ex-party addict has shocking transformation after embracing Islam

‘Whether it was the words I used or the attitude, I had a big ego’, she admitted. ‘Islam has bettered me in terms of my character, the way I speak to people. I don’t backbite and gossip, all these things Islam has taught me.’

Persephone described how her weekends used to be a blur of parties with friends.

‘In my peak party life a weekend would have started for me with “Whose idea are we using, what outfit am I wearing, what’s my fit going to be, what heels am I going to wear”,’ she said.

She recalled one occasion when she was ‘really drunk lying naked on the kitchen floor’ and said ‘I can no longer do this, this is not what’s meant for me’.

After discovering Islam, Persephone threw away bags of her clothes she no longer felt were appropriate, removed her false nails, changed her name on Facebook and deleted all her racy pictures (pictured L-R, Persephone before converting to Islam) 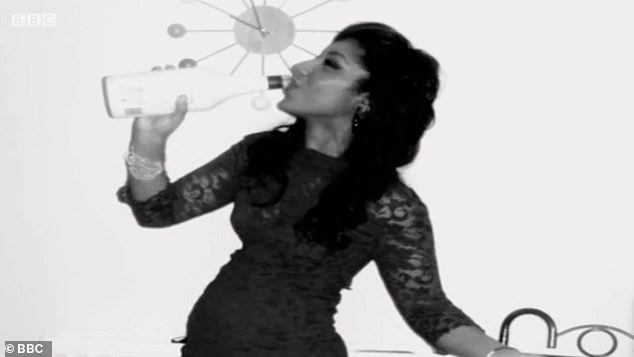 As a young woman, Persephone would spend her time partying with a mixed group of friends, drinking alcohol and staying up until the early hours of the morning 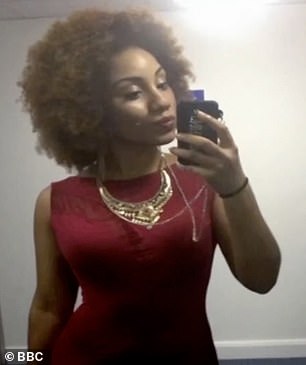 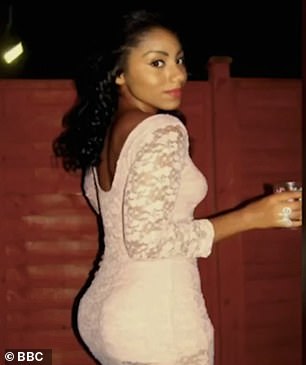 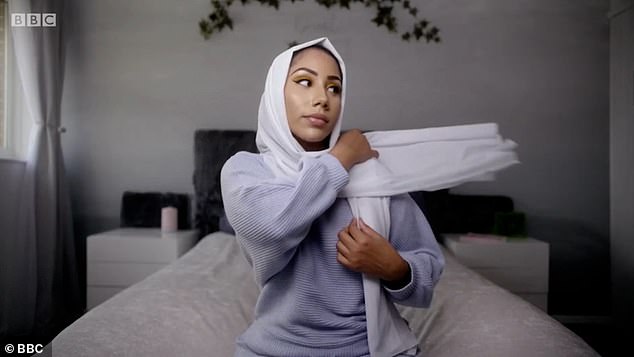 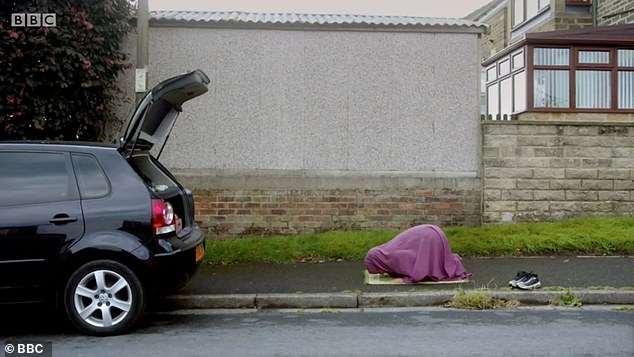 Persephone, seen praying, said she credits Islam with saving her life and giving her purpose

At one point in the programme Persephone returned to a park where she had previously tried to end her life.

‘I didn’t even see it coming,’ she said. ‘When I [last] came here my mental health was really bad. I tried to end my life. I can’t believe it when I think back, what could have made me be that hurt.

Persephone’s parents have been supportive of her journey into Islam, and the documentary saw her speaking with her mum and dad about when her mental health was at its lowest. 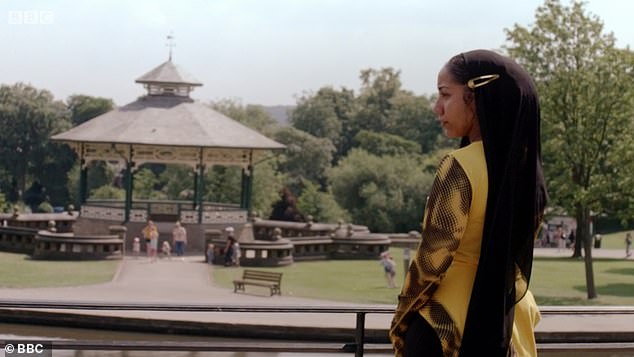 Persephone would often spent time with her friends in a local park, and revisiting her old haunt reminded the former party girl of falling into ‘a lot of dark places’ as a result of drinking 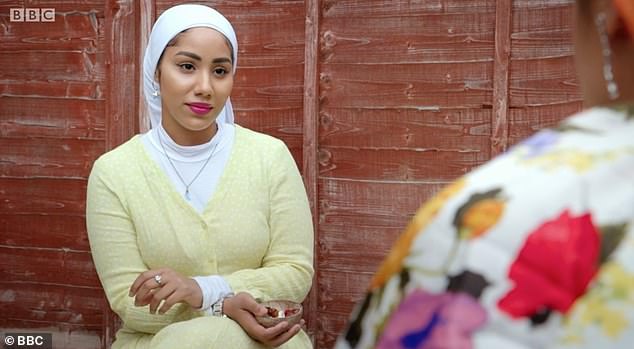 Persephone’s parents have been supportive of her journey into Islam, and the documentary saw her speaking with her mum and dad about when her mental health was at its lowest 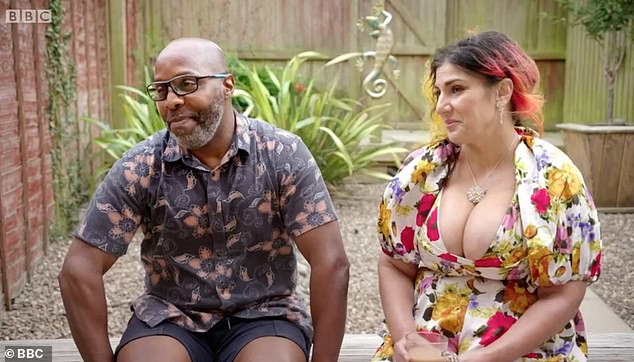 ‘You were just on a downward spiral,’ said her mum, pictured, during their candid chat about her mental health on the show

Her mother recalled: ‘You were just on a downward spiral. I actually at times, I didn’t think you were going to make it. We had concerns for you, we thought you might do something.’

She added: ‘This is what my concerns were, you didn’t want to speak about anything really. But you used to write [diaries]. I used to read them.

‘I used to make sure you had lots of greasy body lotion so I could get into your phone, I used to read your chats and you were in a very dark place.’

After discovering Islam, Persephone threw away bags of her clothes she no longer felt were appropriate, removed her false nails, changed her name on Facebook and deleted all her racy pictures.

‘I think for me it was pretty much about looking for answers,’ she said of her decision to convert.

‘I saw no purpose or value in myself, I started fasting with a friend in a call centre and I’d actually done Ramadan twice before I became Muslim. 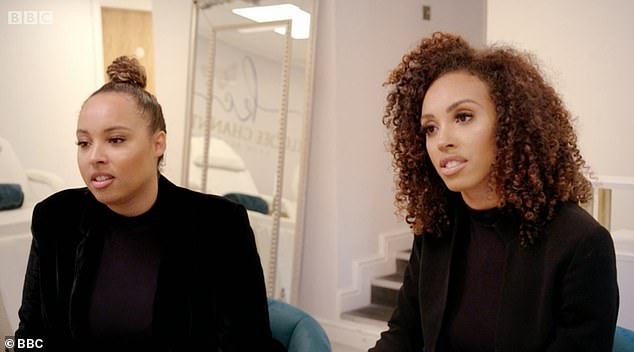 Friends Persephone met up with, including sisters Khloee and Chanelle and were all accepting of her change of religion

‘The feeling was immense at the end of the day, she gave me that first real feeling of Islam and gratefulness and peace that finally made me say I finally need to take my Shahada now [Islamic oath].’

She ghosted her friends because she thought it would be too difficult to be around people drinking alcohol and eventually moved to London followed by Manchester before moving back home at 27.

‘When I converted I cut them off, like if you’re not Muslim we can’t be friends. But now I know more what I believe and I know it’s not that,’ she said.

‘I literally dropped off the face of social media changed my whole religion converted to Islam and expected them to wanna meet up, wanna catch up with me and reintegrate into my life and let me into theirs.  Am I asking too much of them? I don’t know.’

The four friends Persephone met up with were all accepting of her change of religion, and reflecting on her journey she said that she felt she could ‘be herself and accept herself’.

This Girl’s Changed is available on BBC iPlayer