Meghan Markle delivered a speech last night at the One Young World Summit for the first time in two years in front of a UK audience, and while the Duchess of Sussex caught everyone’s attention with her bright red matching Valentino trousers and blouse, it was what she said in her speech that piqued people’s interest. Jesús Enrique Rosas, aka The Body Language Guy on YouTube, analysed Meghan’s body language, the content of her speech and how she delivered it to try and engage with the audience.

During his most recent video, Jesús commented on how natural Meghan is at public speaking: “Meghan has experience [in public speaking] and charisma, even if her speech is all about herself, she is more natural.”

In general, the expert said there were a “couple of things Meghan [did] right” in her speech. “[She had] certain pauses after specific words, so the words carry more weight. It’s not like Harry’s UN speech, he had the same frequency all the time so it sounds monotonous and boring.

“She has the ability to deliver the speech the right way using her voice, frequency, rhythm – she’s got the skills, but the content is nothingness…waffle, waffle, waffle,” Jesús remarked.

Meghan told the audience “how on earth did I get here?” And the expert noted how the Duchess “plays with her voice” – and it’s something she has been doing “on her podcast”.

Jesús said it was a positive thing to “play with your voice” during conversations or public speaking. 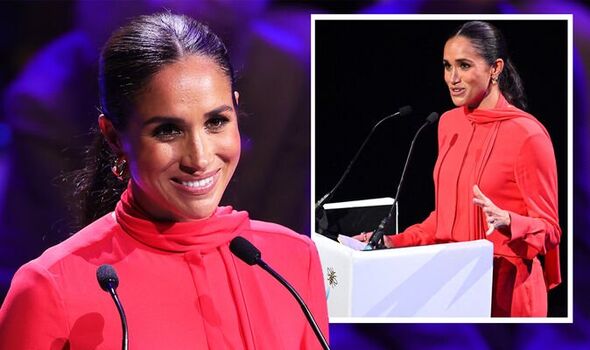 He also suggested this was her way of “trying to be engaging and charismatic”.

Jesús went on to discuss an “emotional moment” Meghan mentioned to which she received applause from the audience.

“I was now married and I was now a mom,” Meghan said and after a brief pause, the audience clapped.

Jesús said how a speaker can “drive” the audience to clap in response to a “wel-placed pause after an emotional moment”.

He added how “people on cue being to clap organically – and that’s something you can do as the speaker, it’s a trick” and Meghan “knows how to do this”.

As for the content of Meghan’s speech, Jesús said: “She begins storytelling about herself – that is not that wrong, telling a story about yourself, that is actually how most TED Talks start” but he was left wondering “what the punchline” was.

In his opinion, the content was “generic and not specific” which made it “boring”.

At one point, Meghan tried to connect with those listening and said she “wasn’t sure [she] belonged”.

Jesús explained: “When you give a speech or write an article, you have to use the tropes and structures and the triggers that every human can identify with. ‘I wasn’t sure I belonged’ is a crafted sentence…it’s like imposter syndrome…and she’s trying to connect with the sensation that every single one of us has felt like they didn’t belong at one point in their life. 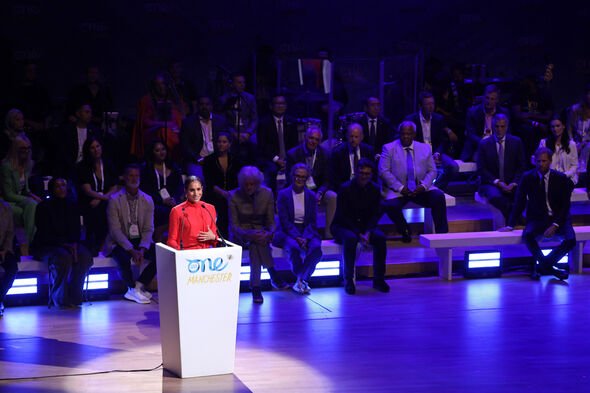 “Empathy is not a single sentence or a couple of words, so it could sound patronising for being so focused on herself,” he added.

Nearly three minutes into the speech, and Meghan was “still speaking about herself” and Jesús noted how she “hadn’t changed the topic” to discuss gender equality, which is what her speech was meant to be about, as well as containing advice to young people.

The expert said Meghan had seven minutes to “give an empowering speech and she made it about herself”.

Meghan then recalled a time when she met a woman from Eritrea and Jesús revealed how the Duchess made this particular story “about herself”.

Meghan continued: “I remember my shock, and I also remember her courage. My recognition of how much continues to go on each day with so many turning a blind eye.”

Jesús pointed out: “All the references she made – two or three of those references were to herself.”

Meghan then moved on to speaking about “joining the delegation in 2016 in Ottawa” and how she was “very lucky to receive a day off filming [Suits] to take a quick flight from Toronto to Ottawa to be able to join the work again of This One Young World”.

“We wanted to know more about that story, instead of switching back to speaking about herself and her past schedule,” Jesús opined. 23 Oct 20
You’ve heard of horsepower — but has your car got elephant-power?A Subaru in Kenya found…
Lifestyle
0

25 Nov 20
Nigella's been mocked for making a meal out of the simplest dish. But she's not…
Lifestyle
0