The nation’s top medical expert says he advised the federal government to stem the flow of Australians returning from India because of COVID-19 but made no recommendations to jail or fine those who circumvent travel bans. 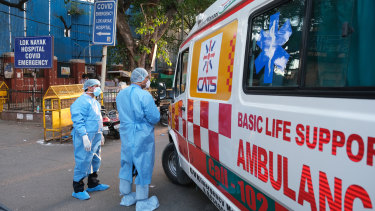 People who have been in India in the 14 days before arriving in Australia now face fines or jail time.Credit:Bloomberg

Australians who return from India now face up to a $66,000 fine and five years jail for circumventing the government’s ban on travel from that country under changes to the Biosecurity Act signed off by Health Minister Greg Hunt on Friday.

The ALP and Nationals, however, have both voiced disquiet about Australians being left stranded overseas.

“Our advice was that we needed to do something about the number of positive cases coming into our hotel quarantine [system],” Professor Kelly told ABC’s RN Breakfast on Monday morning.

“There was no advice given in relation to fines or jail terms, that’s just how the Biosecurity Act works.”

Prime Minister Scott Morrison said the government was continuing to make decisions that were in the best interests of the country. Direct flights from India to Sydney and Darwin have been halted until May 15 because of a massive increase in cases in quarantine, he said.

About 15 outbreaks were started from cases in hotel quarantine, including the latest WA outbreak that was sparked over the weekend.

“We’ve seen a seven-fold increase in the rate of infection of those in Howard Springs coming back from India,” he told 2GB on Monday morning.

“So it’s important that we have a temporary pause here to strengthen those arrangements in those quarantine facilities, get stronger testing arrangements.”

“We should be helping Aussies in India return not jailing them,” he tweeted on Monday morning.

Opposition leader Anthony Albanese accused the Morrison government of abandoning Australians in India and called the threat of jail for those returning an “extraordinary” policy.

“Australia has obligations to our citizens, to people who are Australians – not just to abandon them overseas, but then to threaten them is quite extraordinary action,” Mr Albanese said on Sunday.

“The government’s got to justify how it is that the figures from India are similar to what they’ve been in the past from the UK and the US, but we haven’t seen these sort of measures.”

Dr Jagvinder Singh Virk, chairman of the India Australia Strategic Alliance and a long-term Liberal Party member, said the community was very upset about the ban.

If Australian citizens die in India, who will be responsible?” Dr Virk said.

Mr Morrison said the travel ban is under continual review.

Catch all the day’s breaking news

At the end of each day, we’ll send you the most important breaking news headlines, evening entertainment ideas and a long read to enjoy.  Sign up here.