First home buyers will be able to use their superannuation to get into the property market under a pledge from the Coalition. 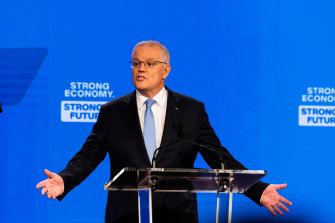 “We want to further help Australians get past what is the biggest hurdle on their path to home ownership [and] that is the difficulty of saving for a deposit. And being able to use their own money to do it.”

He said the policy will allow first home buyers to invest “a responsible portion of their own superannuation into their own home”.

“You can already use your super to purchase an investment property. But not your own home. Other countries such as New Zealand and Canada also have policies that allow people to use their retirement savings to help them buy their home. And under a Morrison government you will be able to do that,” he said.

The Super Home Buyer Scheme will start by July next year and allow first home buyers to invest up to 40 per cent of their superannuation, up to a maximum of $50,000 to help with the purchase of their first home.

It will be able to be used in conjunction with the Home Guarantee Scheme and the First Home Super Saver Scheme.

The idea has been pushed by Coalition backbenchers for some time.

Morrison says the policy would apply to both new and existing homes and “whatever amount is invested will be returned to your super when you sell the home, including the share of the capital gains from the sale of that home”.

Only first home buyers will be eligible to access their retirement funds, and they will need to have separately saved 5 per cent of the deposit to be eligible and will need to live in the home for at least 12 months, but there are no age, property or income thresholds.

Couples can both access the scheme if they are both eligible and one member of a couple not being eligible does not stop the other from accessing it.

The prime minister also formally announced the Coalition’s policy to allow Australians aged 55 and over to contribute up to $300,000 to their superannuation when they sell the family home.