THIS is the £1,200 rocking horse that is key to Frankie Dettori’s incredible success in the saddle.

A combination of metal, wood and leather, it has pride of place inside the gym at his sumptuous Newmarket home. 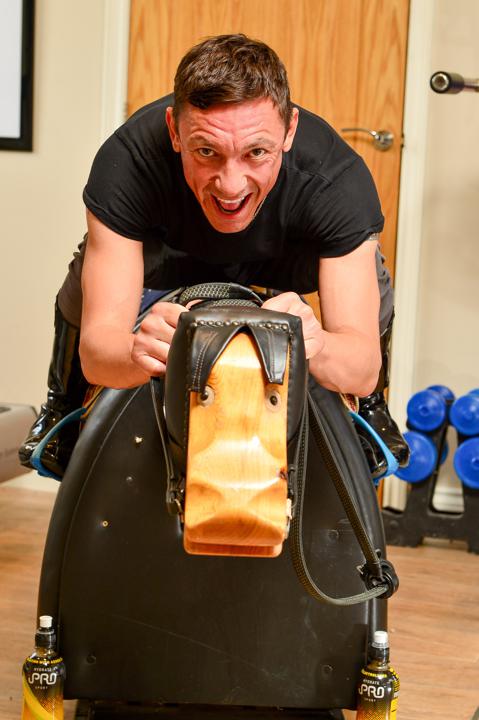 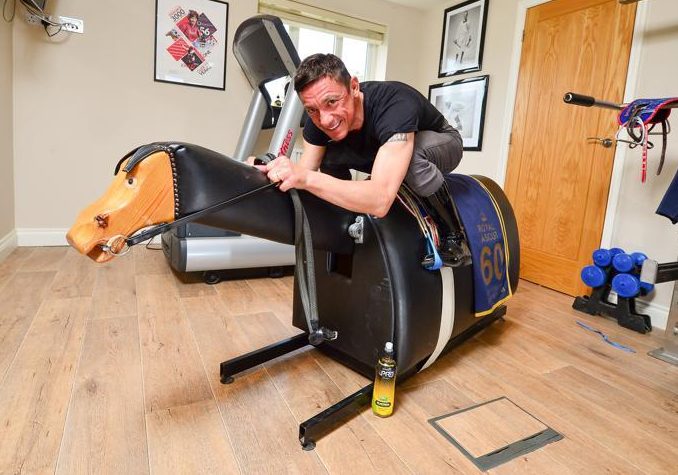 The mechanical simulator looks more like a disgruntled donkey than the thoroughbred champions he is usually astride, but it has helped him stay at the top of his sport for three decades.

Dettori jumps on it every week to remain in peak fitness and, over the years, it has been the key to tweaking his racing style and making him more aerodynamic in the saddle.

He bought his first one shortly after meeting his jockey hero, US Hall of Fame legend Angel Cordero, in America back in 1990.

“I was starstruck,” recalled Dettori. “I was lucky enough to have dinner at his house and he had one of these.

“He put me on it and changed my racing style. As a teenager I used to ride with my full foot in the irons, but he taught me to use just my toes.

“After that I wanted one.”

On his return to England, he acquired his first from ex-jockey Richard Perham, who runs a business manufacturing them.

It was probably the best £400 Dettori ever spent considering he has had more than 3,100 winners and pocketed more than £85 million prize-money since, in the UK alone.

The Italian is now on his third reincarnation of the artificial gee-gee.

He laughed: “My last one was covered in carpet, this one is leather, so I have gone up-market. However, this one lost an eye recently and I had to glue it back on.

“It’s the only training device that replicates riding a horse, and you don’t have the worries of falling off, so you can concentrate on your aerodynamics.

“In the early days I used to train on it in front of a mirror, trying to emulate MotoGP riders the way they get so low behind the windscreen so I could break the wind as much as possible.

“It has been instrumental in perfecting my style.

“I’ve been a professional jockey for 32 years so there’s not much I can improve on now, but I still use it every week for my fitness.”

So, does he practice his famous flying dismounts from it?

It is adorned in a treasured blanket given to him by the Queen after he rode his 60th Royal Ascot winner on Stradivarius in the 2018 Gold Cup.

Dettori’s gym also houses a treadmill, sauna and weights and is decorated with photographs of his phenomenal career triumphs, including his famous magnificent seven at Ascot in 1996. 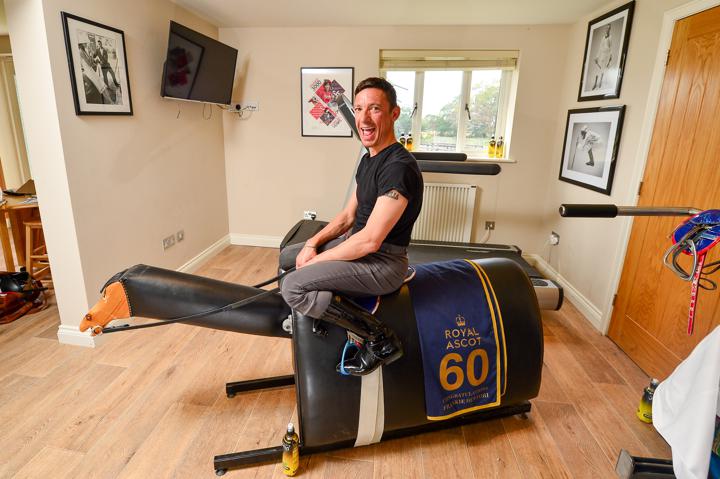 Incredibly, he lived in the gym for a YEAR while building his new £3million home in 30 acres of woodland a short gallop from Newmarket racecourse.

His five children Leo, Rocco, Mia, Ella and Tallula, lived in makeshift bedrooms above the garage.

“It was tough for all of us,” he admitted. “You can’t really swing a cat around in the gym and it was hard for the kids.

“So I want to say a big thank you to my wife, Catherine.

“We had a few arguments, but it was worth it. Trying to have dinner for seven on a fold-up table and chairs was difficult.

“It was like a camp, but the house was worth the wait.”

It stands as a testament to his success in the saddle.

He has been three-time champion jockey and won almost every major race. This season he bagged eight Group 1 winners in the space of 51 days and it could end up being his best ever.

Racing’s 48-year-old superstar wants to continue riding for as long as possible and is still very careful what he puts in his body to keep him at his fighting weight of 8st 9lb.

He said: “When I first started, jockeys didn’t know what to eat.

“We had a can of Coke and a Twix and off you went!

“Now we are lucky. The Professional Jockeys’ Association provides nutritionists for us.

“I am on a high protein, low carb diet. I usually have a Greek yogurt with nuts and honey for breakfast and that fuels me for the rest of the day.

“You can’t have lunch if you are riding because you’ll throw up. But for dinner I would have protein, vegetables and salad.”

“I have been drinking it for a few years. It’s very tasty, very healthy. In this job you sweat a lot and iPro is superb for re-hydration. I wouldn’t drink anything else.”

However, Dettori admits he is feeling the heat ahead of this afternoon’s mouth-watering King George at Ascot.

He is aiming to make more history on board wonder mare Enable by extending her winning run to 11 and edge closer to the great Frankel’s unbeaten record of 14.

Enable has an incredible eight Group 1s to her name and has banked a whopping £8,432,351 in winnings for owner Khalid Abdullah. 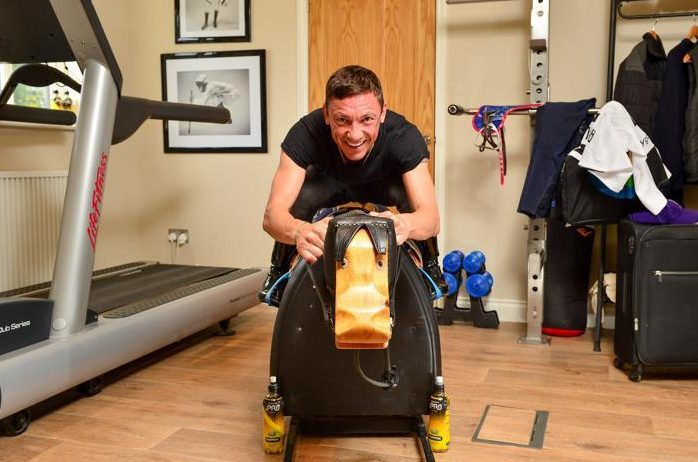 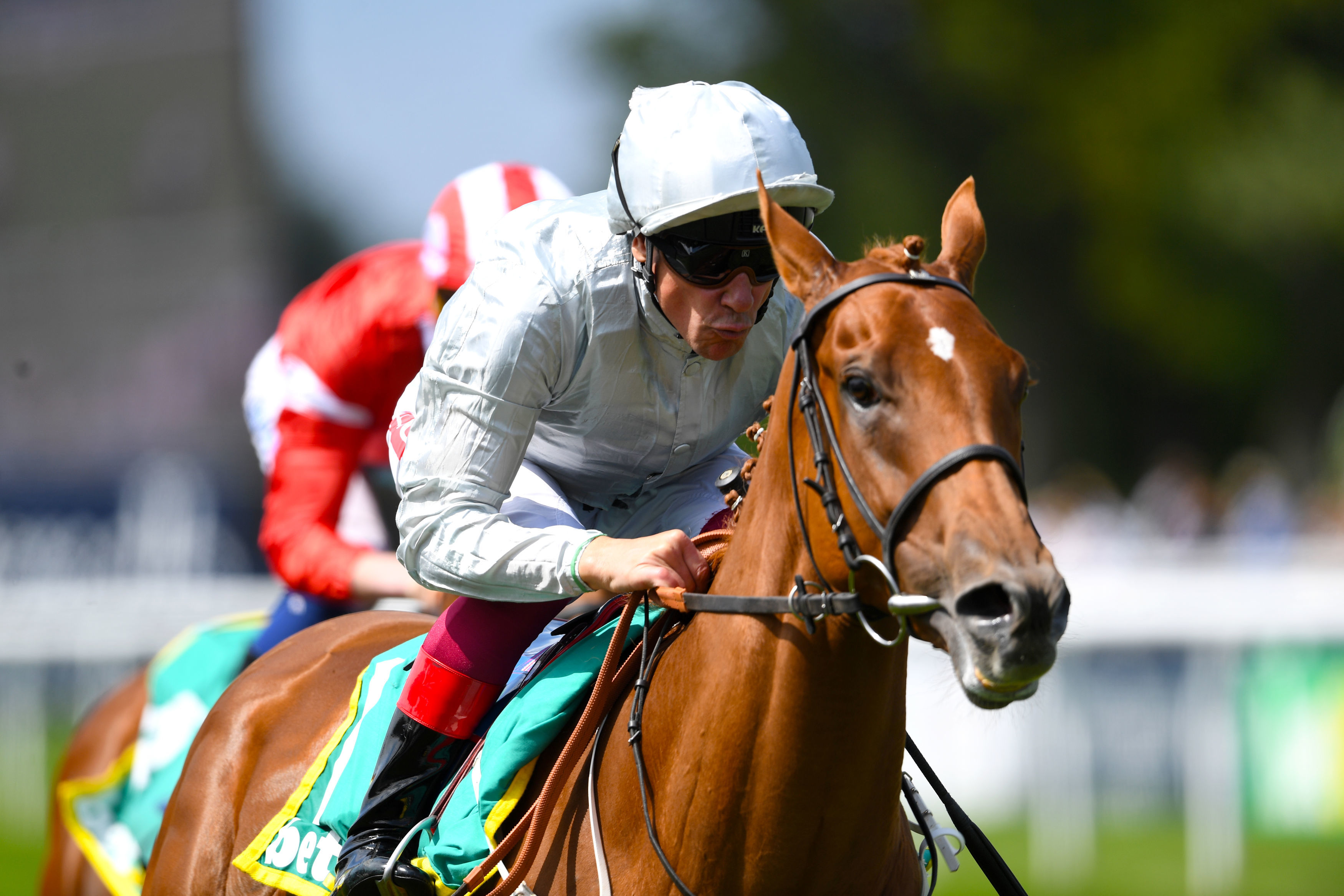 But Dettori admitted: “I am nervous because I know the competition is strong.

“We’ve got a lot at stake. She is unbeaten for two years, everybody loves her and she is family to me. I try not to think about losing, but if I wasn’t nervous I wouldn’t be human because I care about her.

“And, anyway, if it was a walkover it would be no fun for anyone, would it?”

He rode her out on Wednesday and reports she is in tip-top condition. And, if he had a pick of all the horses in the race he would not swap her.

He added: “She has the best CV of any horse I have ridden.

“You go back to the likes of Mill Reef and Brigadier Gerard to find a horse who has won Classics, Eclipses, King Georges, Breeders Cups and Arcs.

“She has won on left and right-handed tracks, soft and firm ground, in all weather.”

Later this season, Enable will also try to become the first horse in history to win the Arc de Triomphe three times.

But he refuses to think about that yet. He said: “I used to have a load of superstitions and lucky charms.

“I had a gold chain with so many four-leaf clovers dangling from it I looked like Mr T.

“But I gave them all up in 2007 after winning the Derby on Authorized.”

However, one thing he refuses to give up is his iconic flying dismount. He vows to continue his trademark winning celebration until he retires.

That day is still a long way off — despite his jockeys’ room peg being right next to the exit. He said: “That’s been my spot since Pat Eddery retired 16 years ago.

“I sit there like an old man smoking my pipe, seeing all those young kids across the room and I don’t even know their names!

“My body is in good shape. The key is to not fall off.

“However, it is part of the job and, at my age, if you do fall, you break. So now I pick my spot for my dismount — wet, spongy grass.

“Most of the people who don’t know much about racing come to see that silly guy jumping off.

most read in horse racing

“It’s quite ridiculous, but I am a slave to it.”

But he won’t mind at all if he has to perform it today.