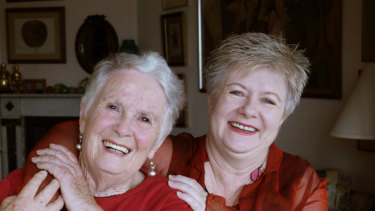 Margaret Fulton and her daughter Suzanne Gibbs in 2007.Credit:Quentin Jones

SUZANNE: From the age of three to 10, I didn't live at home. Mum thought it wise to put me in a progressive school at Pittwater – a boarding school. People were rather disdainful of her for doing that, and when I look back now, as the mother of two beautiful daughters, I think, "How could she?" She did it because she had to get a career going. It was the '50s, and for women to leave their husbands – hers was a ratbag – was very much frowned upon. The boarding school was indescribably tough. Cold showers and duties at an early age – grinding the wheat, feeding the chickens or minding the other babies. A lot of kids had been dumped there. But Mum had faith in the women running the school and I still felt I had a very good mother through it all. I learned to stand on my own two feet and be adaptable and resourceful.

Mum always had rotten taste in men. She went for the good-lookers, and I'd still consider it a weakness of hers. She courts male friendship, which is probably why she ended up in a bit of trouble over an investment recommended by her accountant. The investment went sour and a long court battle ensued – she was lucky to get her house deeds back. It has made me nervous ever since.

Her second husband, Denis, was an incredibly handsome Irishman. But he had the Irish temper. I came home for good from boarding school at 10, imagining I was coming home to domestic bliss, and he was just awful. And a philanderer. It was the man after him, Michael McKeag, who Mum would probably describe as the love of her life. He was tricky, too, but at least he loved her.

On my 13th birthday, she said she'd cook anything I liked. My request was brains in black butter sauce done the French way. We lived in The Rocks, just up from a hotel where all the bohemians and artists hung out. Mum and Denis knew them all. So even that meal was interrupted with callers saying, "Come down to the pub" – but they didn't go.

Mum led a very colourful life in those days. All the other mothers wore high heels and skirts or dresses, and seamed stockings. Mum wore slacks, and little cashmere jerseys and moccasins. She really was cutting edge.

I think that's something people don't realise, because of her being "Margaret Fulton, Everyone's Cook".

When I was 18, she sent me to the Cordon Bleu School of Cookery in London with her first royalty cheque. It was a marvellous thing to do. She could see I was miserable with Denis – and she knew she could be quite daunting. It was a way for her, I think, to see that I developed my own personality, which I'm terribly grateful for.

Mum's little, but she's powerful. People want her to do things, and they think I'll run around and expedite them. I have my own strength and talents and I have to watch that they don't get mixed up with hers – that I'm not the sidekick.

We have enormous regard for each other when it comes to food. I see myself as a team player in the kitchen; she's the show pony. In life, I see that too. I'm trying to encourage her to cook a bit more. But since she had heart bypass surgery in 2005, she's lost a bit of confidence. Last year she had a mystery illness for six months, and became helpless. It absolutely frightened me to see her so needy – a person who'd been so strong and wilful.

She recovered and now she's doing yoga. She has this young male instructor and loves to pretend they do the Kama Sutra together. But the best thing in her life, I reckon, is her 89-year-old neighbour, Nola, who's never had much interest in food, whereas Mum thinks mostly about food. Every day the two of them go off walking. It's marvellous that an 89-year-old can be her fitness trainer.

MARGARET: Suzanne was an absolute darling as a baby. Being a single mother 56 years ago was harder than today because you didn't have child care, and I didn't have a mother. She died when I was 25. Suzanne was nine months old when I left my first husband. We lived on the Hawkesbury River with my sister and her husband. We had oysters off the rocks and the fishermen would swap prawns for the oranges we grew. But I had to work and I didn't want to see this little child being dragged home at 7pm. I thought she should go to this progressive school. I wanted her to be a bit of a free spirit and think for herself. But, of course, it's very hard for a child not to be at home. She came back at weekends. I never let her down.

A friend found a little house for me in The Rocks. I was thrilled because it meant Suzanne could come home and go to Fort Street [school]. The rent was very low. I got married again about that time. I thought it was improper – it just shows how stupid you are – for Suzanne to come home and for me not to be married to this person I'd been living with.

Denis was an actor. He loved arguing because he loved making up. I'm a Scot. If I argue, it's for life. One time the doctor found I had an ulcer and I was told not to let myself get upset. I remember Denis and Su

zanne – she was about 12 – were yelling at each other, and I thought, "I must remove myself." I remember looking down at them from upstairs and thinking, "S

he's holding her own." Denis had been in the army and he loved barking orders. He was a pain in the arse. No, he wasn't. Everybody loved him.

We've both enjoyed a career in food, because cooking properly is different to just cooking. With main dishes, and with my savoury-type food, I'm equal to her, but when it comes to things like cakes and pastries, she absolutely surpasses everyone. There was a period last year when I wasn't well and I thought Suzanne wasn't cooking the meat enough, or the vegetables weren't right. I shut up about it but I wouldn't eat, and that, of course, is as distressing as arguing.

Robert [Suzanne's husband] is a darling. Suzanne always said, "Mum, I learnt who not to choose through you." Just before they got married, she got big lumps on her neck. She'd had a girlfriend who'd died of Hodgkin's lymphoma. I was frantic. My friend [the chef] Charmaine Solomon said, "We'll have a prayer meeting for Suzanne." Charmaine believes to this day that the prayer meeting saved Suzanne's life. I don't like to disillusion her. The physician said it was probably cat-scratch fever.

I think Suzanne has turned into a worrier. When I was having my quadruple bypass, she was much more emotional than I was. She watches me like a hawk. I'm not used to that. Suzanne was very watchful with her children and, now that they're grown up, with me. It's not my way. 21 Sep 22
In this column, we deliver hot (and cold) takes on pop culture, judging whether a…
Lifestyle
0

14 May 21
Gillian Anderson is joining the cast of “The Great” Season 2 at Hulu. Anderson will…
Lifestyle
0