Making friends in later life is tricky, for all sorts of reasons. From the playground to college, from the workplace to the school gate when we have children, we tend to accumulate pals along the way.

But even while we’re amassing friends, we lose them, too – they move away or abroad, we perhaps divorce and some of those we were friends with as a couple go over to “the other side” or they just aren’t good at having singles round their table. 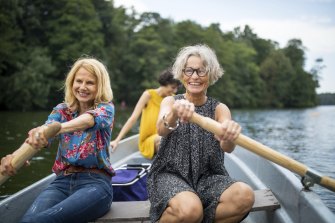 Not only is it possible to make friends in later life, it’s important.Credit:iStock

And then, if you have always been single and/or without children, all those loved-up parents you used to go clubbing with are no longer available in the way they once were.

Maybe your partner dies and you suddenly realise that in your couple bubble you allowed certain friendships to drift. So by the time we get to 50 or over, some of us find ourselves feeling as though we’d like to broaden out our social circle.

The question is how? There’s something embarrassing, almost shameful, about owning up to wanting more friends. Or admitting to loneliness. You feel vulnerable, you worry people you approach might not like you, that you’ll get rejected. It all feels like a bit of a minefield. Or you may feel that if you don’t have enough friends by now, you must be somehow lacking – perhaps even unworthy.

But not only is it possible to make friends in later life, it’s important. Friendship is good for us. Having friends is a strong predictor of happiness and life satisfaction. A 2010 report in the Journal of Health and Social Behaviour said strong social ties can even boost your immune system and help you live longer. Areas identified as Blue Zones, from Okinawa in Japan to the island of Icaria in Greece, all have low rates of chronic disease and people there live unusually long lives. Common to all these zones – alongside good diets and plenty of physical activity – are strong friendships.

One treasured friendship I made was at university. Not from the time when I was a teenage college dropout, though, but 40 years later when I went back to uni to do a degree (and this time see it through) at the age of 57. It had been a tough couple of years. My husband and I had separated and my son had left the nest. I felt I needed a new challenge, out of my comfort zone, and to meet new people.

Although Birkbeck, where I went, is designed for mature students, I was easily the oldest student in my cohort: older than a lot of the lecturers, too. But just like in the school playground, where you’d look at someone and think, “I want to be her friend”, that’s what occurred to me when I looked at Sarah Muscat. She was bright and forthright and not afraid to speak out, though I soon realised that, like me, she wasn’t sure she was up to standard when it came to studying.

Tentatively at first, and despite a wide age gap, we found we had a kind of chemistry. In the early days we joined others in the student bar, but soon we discovered a glamorous cocktail bar in a nearby grand hotel, and that’s where we repaired to after classes for a G&T and fierce discussions about feminism, fashion, politics and literature. I was thrilled to have this new friend in my life, it was so easy for us to be emotionally open with one another. And when she invited me to her 50th, a women-only bash of her longest-standing pals, I was touched and delighted.

Fast-forward 13 years from when I met Sarah and now, approaching 70, I am again thinking I could do with some new friends. In the past couple of years, three good friends have died, two have withdrawn from the world – and the fun we had together – because of ongoing illness, a couple have moved out of town and one I fell out with (it happens). “Not only could I do with new friends,” I bleated to my partner – whom I met 12 years ago at a mutual friend’s party – “I could do with some younger ones as well.”

In some ways, whether you want to make new friends or find a new lover, the same principles apply.

As Jenny Rogers, an executive coach who often finds herself devoting coaching sessions to the art of friendship, says: “After my husband died 11 years ago I said yes to everything that came my way for at least a year. I had known for at least five years before his death that I would be on my own, so finding new friends became a project.

“In my work as an executive coach, the business of lacking friends frequently comes up. People often say that family life is OK but they’ve lost touch with friends and acquaintances over the years.”

According to Jenny, people get out of practice at the art of making friends whereas research shows that “people who share interests often share temperaments, so that has to be one of the best ways of meeting new people”. Or as my friend Sarah, whose fascination with interior design led to her joining a social/networking club for those interested in or working in the field, asserts: “There’s only one way to make new friends, and that’s to put yourself out there.”

For those looking for love in later life, but who feel less than comfortable with looking online, expanding your friendship group through activities is the way to go. The more people you meet, the more likely you are to find someone you spark with romantically.

Making new friends has never been a problem for Nadia Marks, a former art director and now a successful novelist – but when her partner and father of their two children walked out, after almost 40 years of marriage, she felt bereft. “Despite having friends it was a lonely time. There were two women who lived quite near me (we’d only met once) and one of them was a masseuse. The stress was making everything ache and I contacted her and started having regular massages.

“She reached out and invited me for dinner with her and her wife Aisha Ali. Aisha and I got on really well, she was so warm and open and our personalities quickly clicked. When Aisha started having marital problems of her own it was my turn to reach out to her.

“I’m with my new partner Mike now, but Aisha and I have remained friends for more than a decade. It doesn’t matter to me if I meet someone professionally or personally – if we click, there’s room for friendship to grow. My motto is to always be open, don’t isolate yourself and friendships will happen. It’s important to be prepared to let people into your life. Not everyone can be your ‘sister’, but friends are so vital to our wellbeing that there’s no such thing as having too many.”

For Nadia’s friend Aisha, who describes herself as a shamanic psychotherapist who helps people transform their relationships, life is like a series of chapters in a book and we may need different friends for different chapters.

“When I met Nadia,” she says, “I could see she needed to rebuild her sense of identity, and felt lots of compassion for her. We laughed a lot, too, and bonded over a mutual love of books by Colette.”

Friends don’t always like us to change, and can’t always change with us, Aisha believes, so we may need to reach out to new people at different stages of our lives.

Building friendships takes time and that process mirrors some of the elements of romantic relationships. “At first you might find yourself infatuated,” says Jenny. “Then you start to see the differences, like your political views perhaps. And maybe, then, you feel like running away. But hang in there. The more realistic phase, the phase of true intimacy, comes later. It could take up to two years to make a rock-solid friendship.”

New friends are out there, waiting to be found. Here’s to happy new friendship in 2022.

How to make friends (and keep them)

Make the most of your health, relationships, fitness and nutrition with our Live Well newsletter. Get it in your inbox every Monday.

Most Viewed in Lifestyle