Climate change is set to animate the upcoming federal election, with major parties selling their green credentials and a raft of climate-focused independents threatening to capture seats from Goldstein in Melbourne to Wentworth in Sydney.

But frustrated by decades of political inertia, Australians are waking up to a new type of climate activism: the power of their own money.

Consumer spending is the ultimate cause of more than two-thirds of total global emissions. We have always had some information to help us make eco-friendly choices at the shops, such as Energy Star ratings on appliances, fuel efficiency ratings on vehicles and packaging indicators on recyclable products. But we are witnessing a wave of new information and business transparency that will enable consumers to wield their spending as a precision climate weapon. 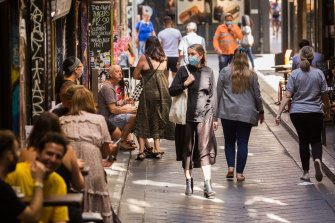 Consumer spending is the cause of more than two-thirds of total global emissions.Credit:Paul Jeffers

The Commonwealth Bank now helps customers analyse the emissions produced by each of their individual transactions to help them understand and reduce their environmental footprint. Australian shopping app Greener has helped its users cut 30 per cent of their carbon footprint by connecting them with sustainable merchants.

Google has begun to introduce new product features to give people greener options when they travel and shop. In Europe, for instance, Google Maps now shows you the most fuel-efficient route as well as the fastest. Google users in the United States can see the carbon emissions for every flight they book and quickly find lower-carbon options.

Australian environmental data service PurposeBureau tracks the carbon emissions of every Australian business. Some of the data is startling. For example, did you know that each dollar you spend at your butcher funds more carbon emissions than those you spend filling up your car at the petrol station? Or that getting a brick wall built in your garden could generate 10 times more emissions than having your pipes fixed by a plumber?

It’s not just your spending, but also your savings that can help save the planet. Ensuring that your superannuation is invested in sustainable businesses can have a huge climate impact. Research from the UK shows that making sustainable investment choices can have 21 times more impact on your carbon footprint than giving up flying, becoming vegetarian and switching your energy provider combined.

Businesses are responding to the new consumer empowerment. Brands are rushing to compete for the “conscious dollar” and appeal to the growing army of sustainability-focused customers.

For example, if you buy a jumper from trendy knitwear company, Sheepinc, you can tap your smartphone against the tag for a full history of how it got to you. Spoiler alert: it was woven on a 100 per cent solar-powered machine and delivered to you by a carbon-neutral logistics firm.

If you buy a pair of shoes from the hot New Zealand-American footwear company, Allbirds, you’ll find a number stamped prominently on the inside sole. That’s not the shoe size, it’s the kilograms of carbon emissions used in its manufacture. In case you are wondering, the average Allbirds shoe generates 7 kilograms of emissions, less than half the CO2 of typical joggers.

Big companies are also making major sustainability pivots. While many companies are pledging to get to “net zero”, some are going even further. Microsoft has committed to not only eliminating emissions, but to reverse its historical emissions. Their goal is to eliminate all the carbon the company and its suppliers have emitted since its founding in 1975.

Importantly, new global rules will crack down on companies that are all talk and no action on sustainability. The United Nations Glasgow climate summit last year launched the International Sustainability Standards Board (ISSB) which will replace a patchwork of voluntary disclosure practices with “baseline” global standards to lift transparency and crack down on greenwashing.

Eight in 10 Australians say sustainability is important to them, but until recently they didn’t have the information to act on their preferences. That is starting to change. While our votes will matter in the next election, we don’t have to wait for politicians to act. We have the power every day to vote climate with our wallets. 14 May 20
In stressful times, we often turn to animals to comfort us, distract us and make…
Lifestyle
0