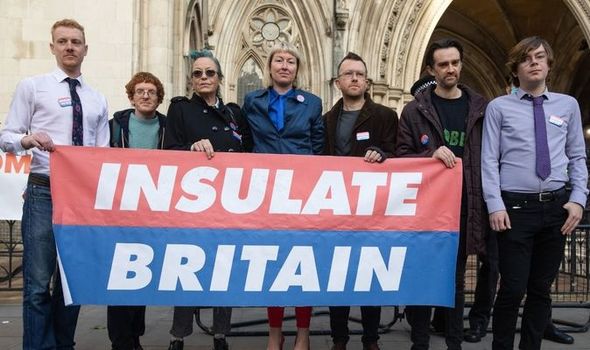 Most were sentenced to three or four months, but Ben Taylor, 27, received six months after an “inflammatory” courtroom outburst. As they were led to the cells, the nine chanted: “We are unstoppable, another world is possible.”

Outside London’s High Court, supporters compared them to US civil rights champion Martin Luther King and the suffragette movement.

The nine were jailed for breaching an injunction by taking part in an M25 blockade on October 8 – part of a series of protests by the Extinction Rebellion offshoot.

The Government has urged the court to order them to pay National Highways’ £91,000 legal bill. A decision on costs will be made later.

Protesters have been condemned for holding up emergency vehicles, preventing elderly patients getting to hospital, children going to school and delaying vital deliveries.

The judge, Dame Victoria Sharp, said: “The defendants, or some of them, seem to want to be martyrs for their cause, and the media campaign surrounding this hearing appears designed to suggest this.

“We, however, have to act dispassionately and proportionately.”

Dame Victoria gave Taylor a longer sentence after calling his submissions inflammatory and a “call to arms”.

What is happening where you live? Find out by adding your postcode or visit InYourArea

The M25 injunction was granted on September 21, but on October 8 protesters blocked two lanes at Waltham Cross, Herts. Two activists glued themselves to the ground.

Five High Court injunctions against blocking roads including the M25, the Port of Dover and major routes around the capital, have been issued.

The court heard committal proceedings relating to protests on October 27 will be issued against other Insulate Britain protesters by the end of the week.

Evidence is also being gathered to bring proceedings over incidents on October 29 and November 2. 6 Mar 21
DEAR DEIDRE: MY ground-floor flat was my sanctuary and home for more than 20 years. But…
Lifestyle
0