I have always believed, I think, in the secret life of objects. Not so much a secret life, really, but a kind of secret energy, composed of past events and moments that adhere to some objects like barnacles to a rock. These objects then give off this energy in some indefinable way that humans respond to – which is why some objects are appealing to us, or arrest our attention, or move us emotionally.

I've just reread those sentences and realised they sound completely crazy – like the blog I found describing the way in which, in order to sense the inner life of a rock, you must become the rock. (You do this, if you're interested, by matching your vibrations to those of the rock. A rock's vibrations are "still and solid".) 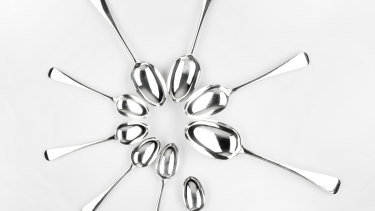 A thing might feel solid, or competent, or honest: some positive emotion that varies from object to object, but that always includes happiness.Credit:Jennifer Soo

Do I believe this? Even worse, do I believe in psychometry – which is, according to that unimpeachable source, Wikipedia, "a form of extra-sensory perception characterised by the claimed ability to make relevant associations from an object of unknown history by making physical contact with that object"?

Of course, interpreting the "associations" of objects is what psychics claim to do when they say they can find a missing person by communing with their locket; and what Lyall Watson (a gentleman scientist, contrarian and kook of the 20th century) suggested might be possible in his book The Nature of Things: the Secret Life of Inanimate Objects. Watson speculated that "matter has the capacity to absorb emotional 'fingerprints', the mental fossils that channel echoes from the past". He also claimed, in another book, that plants hear the cries of distress when a live shrimp is put into boiling water.

Mainstream scientists, unsurprisingly, are unconvinced by Watson. And, as usual, I'm on the side of the scientists. Or am I? The fact remains that sometimes I'll be standing in Vinnies and, among the dross of muffin pans and plastic jars and saucepans with their lids missing, I'll pick up something – an egg cup, a butter knife, an ostrich egg – that just feels good. I don't intuit particular events in that object's history, god forbid – no scarab beetle has ever told me it once belonged to Cleopatra – but I do feel a sort of energy. A thing might feel solid, or competent, or honest: some positive emotion that varies from object to object, but that always includes happiness. When this happens, I almost invariably buy the object. And regardless of the vagaries of fashion or the passage of time, I always get this same feeling whenever I see it.

Alas, this doesn't just happen at Vinnies, where the price point means I can, within reason, afford anything in the shop. Earlier this year I made the grave error of noodling around on Google for sterling silver cutlery, and found a set in a beautiful specialist antique gallery in Canada that gave me a feeling of quiet, elegant restraint. (I know, I know.) It cost a ridiculous amount of money; it was made by the Goldsmiths and Silversmiths Company in London in 1923; and it seemed to come from a world that bore absolutely no relation to my own – a world of morning rooms and housemaids and individual toast racks.

But, you know, it looked cheerful. So I wrote to the antique dealer the first of many, many emails, which culminated in him sending across the Pacific at vast expense one spoon and one fork, so that I could "meet it in person" (his words) and see if it gave me the same feeling in real life. It did, and I bought it, feeling sick at the cost, and now every time I use it I get a small but undeniable burst of happiness. This response is even proof against the fact I have to hand-wash it, which is saying something.

I should explain at this point that this feeling is not an acquisitive desire: I don't only have it about objects I want to buy. I once had it about a chair in a Paris museum, for example. And conversely, most objects I want to buy don't give me this feeling. Nor is it an aesthetic judgement: most beautiful objects don't give me this feeling, either. In this case, it's a bit like seeing a beautiful person on the street, and then seeing your friend. Possibly the weirdest thing about it is that I can see two objects that are exactly the same – two chairs in the same dining set, for instance – and one will give me the feeling, and the other will not.

So what does all this mean? Well, it's some comfort to know that if it means I'm mad, at least I'm in good company. Celebrated 19th-century art critic John Ruskin believed powerfully in the "patina of the ages" – a kind of lustre that objects acquire with time. This patina is both visible, as in the gleam on a piece of antique furniture, and invisible, bestowing a feeling of grace and virtue and joy. It's composed, said Ruskin, of the touch, the gaze, and the emotions of all the people who had made and held and cherished an object through the years: "What their hands have handled, and their strength wrought, and their eyes beheld, all the days of their life."

Ruskin applied this belief system especially to buildings, and especially Venetian buildings (which led to his violent hatred of all attempts at renovation/restoration – he would have utterly loathed The Block), but he also extended it to nature: "Those ever springing flowers and ever flowing streams had been dyed by the deep colours of human endurance, valour, and virtue."

I'm anti-Ruskin on this last point – the great relief for me about nature is that it remains aloof from human emotion or energy. But do I think it's possible that a building might be affected by the men who built it, the families who lived in it, even the people who've looked at it? Yes, I do.

And you know what? I'm not alone. Other people – even wise, highly intelligent people – are with me. I was once talking to an extremely senior foreign diplomat (I'm talking above ambassador level) about house hunting, and in the midst of his description he said pragmatically, "Of course, we couldn't buy that place, because it was haunted."

"Yes," he said, as if he were talking about the plumbing. My wife can sense those things. Someone had been murdered in one of the rooms. It was lovely, otherwise."

Psychologists, too, have a (sort of) theory about the whole thing. It's connected to object attachment: the developmental phase during which children transfer the sense of comfort and security they get from their parents or carers onto objects – often toys or blankets – thus imbuing those objects with positive energy in their own minds. There's speculation that this transferral may continue into adulthood for some people (me?), for the same reason children do it – to decrease anxiety. But let me point out (she says swiftly), that if this is the case, it's not a bad thing: object attachment is seen to be a positive soothing mechanism, and a transitional phase between dependence and independence. (Still there, mum?) 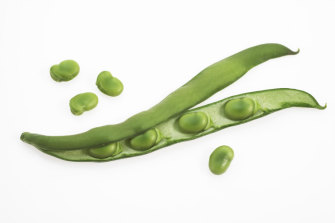 ‘That bean will be lonely! Maybe I should put another one in there? But then, perhaps those two beans aren’t friends anyway, so it won’t help.’Credit:Alamy

There's also a theory that people who ascribe emotion to objects may have higher than usual activity in their insular cortex: part of the brain involved in consciousness and emotion, including compassion and empathy, perception and interpersonal experience. In people who are highly sensitive in these areas (me?), there may be a tendency to expect similar levels of sensitivity in other people and things, even inanimate object things. As a cognitive science researcher from Stanford University, Sydney Maples, put it in 2015: "If you were to feel left out if you were a pen that was not being used, then you may very well treat every pen the way you wanted to be treated."

I am very definitely this person: last night I held a long internal battle with myself, while shelling broad beans, about discarding one mouldy bean, which then sat all on its own among the skins. That bean will be lonely! I kept thinking. Maybe I should put another one in there? But then, perhaps those two beans aren't friends anyway, so it won't help. This monologue went on and on, and only ended when Queensland scored a try against NSW (it was the State of Origin decider) and I forgot all about it.

Thank goodness for competitive sport, a distraction for so many of us from the shadowy recesses of our own consciousness. Sport, and Shakespeare. Perhaps, in the end, it's all explained by Hamlet: "There are more things in heaven and earth, Horatio, than are dreamt of in your philosophy."

To read more from Good Weekend magazine, visit our page at The Sydney Morning Herald, The Age and Brisbane Times. 17 Nov 21
A spot of sightseeing! Prince Charles and the Duchess of Cornwall stroll around ruins in…
Lifestyle
0