Sydney’s job market was faltering even before the city’s lockdown rules were tightened to stem the spread of coronavirus, with growing evidence the national economy is being derailed by NSW’s struggle to deal with the pandemic.

As Treasurer Josh Frydenberg said lockdowns across the country were costing the nation’s economy $300 million a day, data from the Australian Bureau of Statistics showed a near 2 per cent drop in the number of people on Sydney businesses’ payrolls in the fortnight to July 3. 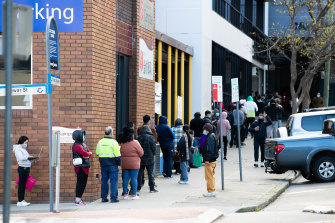 People line up around the block for Centrelink in Campsie, in south-west Sydney. Google searches for the word “Centrelink” have soared since the start of the Sydney lockdown.Credit:Janie Barrett

The drop took the number of people with employment across Sydney down to where it was in late January.

The fall occurred in the early stages of Greater Sydney’s lockdown, which began in late June, before it was tightened by the Berejiklian government in response to growing cases in the city’s west.

The drop in payroll numbers in Sydney was the largest in the country, with every state and territory going backwards through the fortnight. There was a 1.4 per cent drop across the Northern Territory, a 1.3 per cent fall in Greater Brisbane and a 0.8 per cent dip in Greater Melbourne.

The worst-hit industry was accommodation and food services, with payrolls down by 4 per cent in NSW. But in Victoria, which was still coming out of its early-June restrictions, there was a 2.9 per cent jump in the same sector.

Nationally, the biggest increase was for public administration and safety, with a 0.8 per cent lift. There has been a 12 per cent lift in employment in this sector since the start of the pandemic last year.

The jobless rate fell to 4.9 per cent in June but some economists have predicted a rise back above 5 per cent this month as a result of the lockdowns.

Separate figures compiled by ANZ highlight the impact of the lockdowns on Sydney. It found the number of Google searches in NSW for the term “Centrelink” surged to its highest level since April last year, when the national economy was in lockdown.

Measures of mobility also show activity across NSW is back to where it was during last year’s shutdown.

Mr Frydenberg said the economy would struggle as the nation’s two largest cities, Sydney and Melbourne, were in lockdown, with the cost likely to be at least $300 million a day.

“Right now, with more than 13 million of our fellow Australians in lockdown, these are very
trying times. Businesses are closed, kids are being homeschooled and families are apart,” he said. “It’s going to have a hit on the economy. We’ll see that in the future jobs data as well as in the GDP growth numbers.“

Shadow treasurer Jim Chalmers said the federal government was responsible for the growing cost of the lockdowns.

“The economy is bleeding billions of dollars a week because [Prime Minister] Scott Morrison hasn’t done his job and rolled out the vaccine and built quarantine facilities,” he said.

Commonwealth Bank’s head of Australian economics, Gareth Aird, said there was growing uncertainty over the fallout from the current lockdowns.

Mr Aird, who has forecast the economy to contract by 0.7 per cent in the September quarter, said the recent extension and tightening of lockdowns meant the impact was probably getting worse.

“The absence of any downward trend in the number of daily new COVID-19 cases active in the community in Greater Sydney means it is not yet possible to forecast an end date to the lockdown,” he said.

“Income support to businesses and workers negatively impacted by the lockdowns remains critical to ensuring a strong economic rebound once restrictions are eased.”