He’s baaaaaack. After more than a year away, John Cena returned to the WWE at ‘Money In The Bank’ to one of the biggest ovations in sports entertainment history.

The roof nearly came off the Dickies Arena in Fort Worth, Texas, on Sunday (July 18) when John Cena finally came home to the WWE. After Roman Reigns was done successfully defending his WWE Universal Championship against Edge in the main event of the Money In The Bank PPV event, the “Tribal Chief” said that the WWE Universe and the whole world “can acknowledge me.” At that point, some familiar horns began to play, causing everyone in attendance to stand. Out came Cena, 44, to one of the biggest pops in recent WWE history. It was the first time he was seen at a WWE event in 16 months, and clearly, the fans missed him. “It’s been too long!” John shouted over the thunderous ovation before telling the WWE Universe that he missed every one of them, too.

From there, John entered the ring to have a face-to-face staredown with Roman, 36, hinting at the long-rumored match at WWE’s SummerSlam. No punches were thrown, but John did his “You Can’t See Me!” hand gesture in Roman’s face. After the show went off the air, John addressed the crowd.  “It’s so weird because I’m used to you guys telling me how much I suck,” the Fast 9 star told the crowd, as the WWE Universe has a history of booing Cena. “This feels pretty good,” he remarked, before assuring everyone that this was not a “one-night-only” thing – something he reiterated in an interview for the WWE Network.

“’You can’t see me’ — you can see me!” said John. “Money in the Bank shocked the world with so many surprises. So many of the WWE Universe have a litany of questions: Who? What? When? Where? Why? Among others. Well, I’m not going to make you wait for answers. I am kicking off Monday Night Raw to tell you my motivation, and you’re not going to want to miss it. Oh, by the way, if you’re in the Dallas area, get your butt to Monday Night Raw to see it live!” 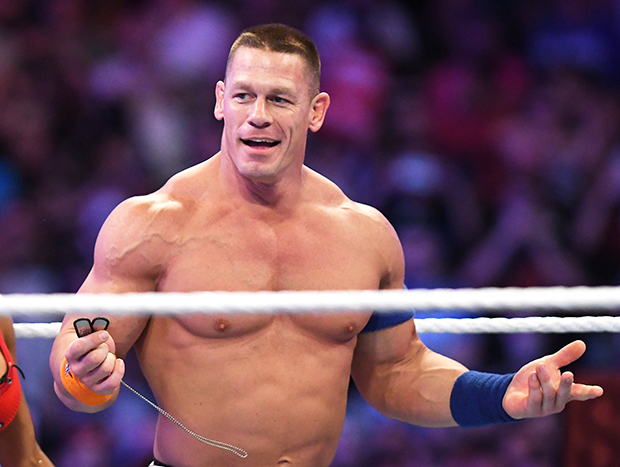 John hadn’t been seen in a WWE ring since his match at WrestleMania 36 in April 2020. A lot has changed since then. His acting career has taken off and he’s gotten married. During that time away, the only way fans could see him was on the television (hosting Wipeout) or at the theaters (F9 and the upcoming Vacation Friends and The Suicide Squad.) John also signed on to star in director Matthew Vaughn’s adaptation of Ellie Conway’s spy novel, Argylle, per Deadline. Filming is scheduled to start filming in August in Europe. SummerSlam, it should be noted, takes place on Aug. 21 at the Allegiant Stadium in Nevada.

19 May 20
Could LeBron James have made it in the NFL? Nearly 10 years ago, the world…
Lifestyle
0