Treasurer Josh Frydenberg has opened the door to a formal inquiry into the Reserve Bank as experts urge the government to make any review as broad-based as possible to avoid a repeat of monetary policy mistakes made before the coronavirus pandemic.

The Treasurer said there may be a need to learn from the pandemic’s impact on the bank which has taken official interest rates to a record low of 0.1 per cent while pumping more than $200 billion into the economy through a quantitative easing program. 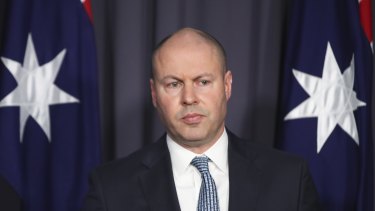 Treasurer Josh Frydenberg says he is open to the idea of a review of the Reserve Bank, in line with a recommendation from the OECD.Credit:Alex Ellinghausen

On Wednesday, the Organisation for Economic Cooperation and Development used its first survey of the Australian economy in three years to recommend the federal government review the RBA, its charter, its internal structure and its communication strategy.

The RBA sets official interest rates and attempts to keep inflation between 2 and 3 per cent as part of its charter to deliver full employment while maximising the nation’s prosperity. It has missed its inflation target since 2015. The Paris-based think tank cited the bank’s continued failure to meet that target and the unconventional policies it had deployed to deal with the pandemic as reasons to now carry out a review. It was the first time the OECD had urged such a review.

Mr Frydenberg said a review, which would be the first in 40 years, was an option.

“It’s something I will give consideration to in terms of looking at the RBA, looking at the monetary policy settings and learning from the experience through the pandemic,” he told Sky News.

“The RBA has performed very well through this crisis, its policy response has been in sync and coordinated with the government’s fiscal response.”

In April, the Labor Party backed a review of the bank and monetary policy, saying no institution was beyond criticism.

Labor leader Anthony Albanese said the bank and governor Philip Lowe had played an outstanding role in dealing with the economic fallout from the pandemic.

“(But) I think no institution is above ongoing review. I think the RBA does a very good job here in Australia,” he said.

“But we need to constantly look at our institutions and make sure that if any improvements can be made, that they are made.”

Senior economist with the Committee for the Economic Development of Australia, Melissa Wilson, said it was undeniable the RBA had failed to meet its own targets over recent years.

Ms Wilson, who has worked at the RBA, said other central banks had undertaken extensive reviews in recent years, adding there was nothing to fear from a proper inquiry.

“A review could show that the bank has acquitted itself quite well and there is nothing that needs to change. But it could also recommend changes that improve its operation,” she said.

“Carrying out a review doesn’t mean the Reserve Bank is doing anything wrong, but you can’t avoid the fact it missed its key inflation target before the pandemic.”

Economic policy director at the Grattan Institute, Brendan Coates, said Australia was already a global outlier as most of the RBA’s international counterparts had recently completed reviews of their operations and mandates.

He said the bank’s recent performance had been poor with its own forecasts suggesting little change in the wake of the pandemic.

“Even before COVID-19, the unemployment rate was nearly a percentage point higher than the bank’s estimate of full employment. Most Australians haven’t had a decent pay rise in years,” Mr Coates said.

“The Reserve Bank is forecasting that wages will start growing faster by 2024. By then we’ll be talking about a lost decade as far as Australians’ living standards are concerned.”

Former Treasury analyst and current assistant professor of economics with George Washington University, Steven Hamilton, said it appeared the only organisation against a review of the RBA was the RBA itself.

He said a foreign expert in monetary policy plus representatives with academic, Reserve Bank and financial market experience should form the heart of an open, transparent review.

“The RBA has for too long been seen as untouchable by successive governments, by journalists, and by the Sydney business establishment,” he said.

“The cost of that complicity is hundreds of thousands of livelihoods. As they say: sunlight is the best disinfectant.”