In this column, we deliver hot (and cold) takes on pop culture, judging whether a subject is overrated or underrated.

If there’s any doubt you’ve spotted a pair of Scott Pape’s acolytes in the wild, keep an eye out for a flash of an ING debit card. They’re a shade of Nickelodeon orange that reminds me of a pool of regurgitated juice I once scraped off a table during my first job at McDonald’s, as well as every awful financial decision I’ve ever made since. (That includes spending the last of those Maccas savings on a $1000 hysterectomy for my geriatric pet rat. Sometimes death is a mercy.) 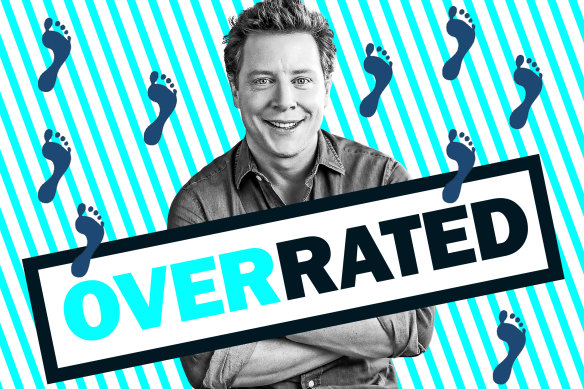 The first iteration of what would become Australia’s biggest-selling book arrived in 2004 when Pape, a 26-year-old stockbroker-turned-writer, published The Barefoot Investor: Five Steps to Financial Freedom with a small, now-defunct publisher. According to Goodreads, readers also enjoyed Don Quixote, Madame Bovary and a romance manga titled Sweat and Soap: Volume 5, perhaps a portent for The Barefoot Investor’s future as a titillating classic.

But it was the book’s 2016 incarnation, released by educational publisher Wiley, that took The Barefoot Investor to Biblical status.

As with any holy text, the book is based on a few core tenets. Readers are instructed to embark on monthly date nights, replete with garlic bread and wine, to discuss their finances and put the Barefoot theology into practice.

Money is split into three sacred “buckets”: Blow (for daily expenses and savings), Grow (super and investments), and Mojo (groovy baby!). The Mojo bucket stumped me. Pape commands that you fill it immediately with $2000 as a safety blanket. Drat! Foiled at the first hurdle. Pape urges readers bereft of a spare two grand to do whatever it takes to scrape together the cash. He jokingly suggests selling a kidney, a prospect I would seriously consider if I hadn’t systematically poisoned mine with bottles of cleanskin.

But there’s no denying the sheer appeal of Pape’s guidance to the clueless money manager, dished out alongside pot-shots at the “white, balding and middle-aged” millionaire men ripping us off from within banks and super fund offices. Pape is a white, middle-aged male millionaire but, crucially, he has a full head of hair, and that puts him on our side.

You’ve probably heard the testimonials. There are plenty who’ve killed debt, saved tens of thousands and emancipated themselves from financial feuds who swear by the book. Though many people under the age of 30 – unable to fill a Mojo bucket, unwilling to depart with vital internal organs, and underwhelmed at the idea of carving up their paltry pay packet into even measlier portions – seem less enamoured by Pape’s fiscal dogma.

As an ex-footsoldier of publishing, Pape’s face haunts me. Since 2016 the bestseller charts have been dominated by his twinkling eyes, the shade of a judiciously spent $10 note. With a historic 2 million copies sold – roughly one for every five Aussie households – Pape could never be bested.

There can be an upside to a blockbuster author like Pape. No one really gets into publishing for the keto air fryer cookbooks and the stocking-stuffer thrillers and these commercial megasellers serve a critical cultural purpose. They bankroll the literature that makes little money yet enriches us all. The Miles Franklin shortlisted. The esoteric short stories. The life-affirming novels. The stuff that can move your soul.

Pape’s second book, The Barefoot Investor for Families (which has clocked at least 250,000 sales) was published by HarperCollins, which publishes literary fiction and launches new writers with its Banjo Prize. Yet, Australia’s bestselling author struck up a deal with HarperCollins he described on The Garret podcast as “disruptive”. The deal saw Pape pay HarperCollins to publish and distribute the book, while he retained the rights. We’re not privy to the details, but I’ll assume that sees less cash funnelled into HarperCollins’ debut author fund and more towards gilding Pape’s property portfolio.

And now he’s coming for the kids. After criticising the Commonwealth Bank’s Dollarmites program as a “cut-throat” way to get its branding into classrooms, Pape has devised his own financial education program for schools. And his new book for kids is doing serious numbers; now 200,000 children are practising fixating on capital gains between episodes of Bluey.

Yes, there’s value in equipping the public with money skills. But in typical Gen Z fashion, I am bitterly cynical about the whole damn system. Pape feels less like the financial disruptor he markets himself as and more like the beneficiary of folks racked with money anxiety who find themselves in the K-mart book aisle.

Every time I think about investing, my eyes glaze over and I recall predictions that by 2050 – when I’ll supposedly reap the benefits of my well-placed shares and compound interest – the structures of society will be well and truly quaking. There’s a reason jokes between friends about fleeing to a self-sustaining commune beyond the reach of capitalism are becoming increasingly earnest.

Perhaps I’ll see you at the commune? Shoes optional.

To read more from Spectrum, visit our page here.

10 Apr 20
Meghan, Duchess of Sussex, has played a highly controversial role in the royal family ever…
Lifestyle
0 17 Feb 22
The wide-leg trend is meant to be so flattering. But... Why is it such torture…
Lifestyle
0