Kooyong independent candidate Monique Ryan’s decision not to allocate preferences on her how-to-vote cards is leading to invalid votes, prompting fears the confusion could hurt her chances of snatching the seat from Treasurer Josh Frydenberg.

Ryan’s campaign, which has repeatedly stated that as few as 500 votes could decide the result, has been alarmed because some early voters have informed Ryan’s volunteers that they voted “1” for Ryan and did not allocate preferences to others. 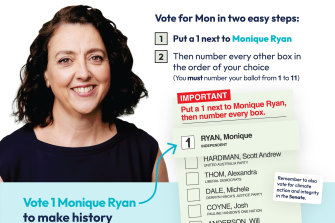 Monique Ryan’s how-to-vote cards have been causing some confusion at the ballot box.Credit:moniqueryan.com.au

A volunteer for Ryan’s campaign has suggested as many as “thousands” of ballots cast for Ryan could be invalid, potentially derailing her bid to unseat Frydenberg, who has spent the final weeks of the campaign in his electorate amid concerns the challenge from Ryan could be successful.

Independent candidates across Australia are urging supporters to make up their own minds when allocating preferences. To emphasise they are not closely aligned with Labor, candidate how-to-vote cards leave boxes next to other candidates blank.

Ballot papers that do not have a number in every box are not counted, and a spokesman for Ryan has implored Kooyong locals to check each box to ensure their ballots are counted.

“Our campaign has heard reports of a number of Monique’s supporters failing to number all of the boxes on the ballot,” Ryan’s spokesman said in a statement to The Sunday Age.

“This is a serious concern, as failing to number all boxes would make their vote invalid. In a tight race, invalid voting could be the difference between winning and losing.”

A spokeswoman for the Australian Electoral Commission confirmed ballot papers would be deemed invalid even if a voter’s first preference was clearly marked.

Monique Ryan’s how-to-vote cards have been causing some confusion at the ballot box.Credit:moniqueryan.com.au

“A vote is deemed informal on the House of Representatives ballot paper if a voter has only marked one box with the number ‘1’ and left the rest of the boxes blank,” the spokeswoman said.

While Ryan’s how-to-vote cards do not mark each box, they do include a message – written in red and marked as “IMPORTANT” – reminding voters to allocate preferences. But some voters seem to be absorbing the voting cards visually and missing the written message.

ABC election analyst Antony Green said independents including Indi MP Helen Haines and former New England MP Tony Windsor did not list preferences on their voting cards. There was no evidence of a higher-than-average number of informal votes in their seats.

However, he said it was a potential problem for independents if voters were not clearly informed, both on the how-to-vote card and verbally by volunteers at polling stations, that all boxes must be marked.

“Independents really need to take account of his. They need to make it extremely clear that voters must number all the squares,” he said.

Four teal volunteers in Kooyong told The Age they heard voters indicate they voted for Ryan without marking any other boxes. One campaigner said it was difficult to gauge how many people were making the error because some might not have realised they had lodged an invalid vote.

“It could be as few as a couple of hundred, or it could end up being in the thousands. We don’t know,” one said.

Since learning of the issue, dozens of Ryan volunteers at the Kooyong early voting centre in Hawthorn have been instructed to prioritise informing voters to mark each box. The Age observed Ryan campaigners diligently carrying out this task on Friday.

The thousands-strong campaign team which says it has door-knocked more houses in one electorate than any Australian political outfit in history has canvassed options to ameliorate the problem.

Options included printing a group of how-to-vote cards with randomised preference allocation, which could be laminated and handed to voters as they enter the polling booths, before being returned to a volunteer.

Another option was to copy the Climate 200-backed independent in Wentworth, Allegra Spender, whose voting cards feature a question mark in her opponents’ boxes. A source who campaigned alongside Spender last week said multiple voters indicated they failed to number each box.

One passionate supporter of Ryan, the former Royal Children’s Hospital director of neurology, entered the candidate’s campaign office in an upset state after realising they only marked one box.

Zoe Daniel, journalist turned independent candidate for Goldstein in Melbourne’s south-east, said her volunteers were reminding people to fill in every square. “They appear to have got the message,” she said in a written statement.

Australians have been required to number each box in House of Representatives elections since World War I, Green said.

In South Australian elections, ballots with only one box filled out are still counted because parties decide where to send preferences. In NSW state elections, voters are only required to select one candidate. 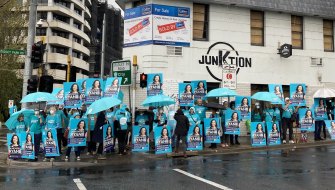 Monique Ryan’s supporters gathered outside the old pub on Saturday where her mural was painted over.

About 5.5 per cent of voters in the 2019 election incorrectly completed their lower house ballot. Green expected this would rise on May 21 because a greater number of candidates would lead to more mistakes. About a third of informal ballots are those with only a “1” marked.

On Saturday, Ryan’s supporters flooded the Kew Junction site where a Ryan-themed mural was painted over after the building owners on Friday claimed permission was never granted. Ryan’s campaign disputes this.

Cut through the noise of the federal election campaign with news, views and expert analysis from Jacqueline Maley. Sign up to our Australia Votes 2022 newsletter here.