Save articles for later

Add articles to your saved list and come back to them any time.

For more than a decade, climate change has been the focus of fierce political debate in Canberra. Much of the wrangling has been par for the course between the two major parties.

Particularly for the Coalition, it has also exposed deep internal party divisions. Malcolm Turnbull's downfall first time around as opposition leader came swiftly after he supported then prime minister Kevin Rudd's cap-and-trade emissions trading scheme in 2009. It sent a sharp warning to the moderate wing of the Liberal Party that any future support of a more progressive approach to global warming would be met head-on. 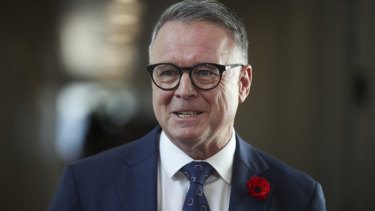 Joel Fitzgibbon stood down this week from his shadow ministerial role.Credit:Alex Ellinghausen

While Labor has in most part gravitated towards advocating for a more activist climate policy, Labor frontbencher Joel Fitzgibbon's resignation from the opposition shadow cabinet this week has put on full display the ALP's own bitter debates over the issue.

For some months now, Mr Fitzgibbon has been forcefully putting the case that, while he supported meaningful action on climate change, any new move from within Labor for deeper and quicker emissions cuts would be "just a recipe for another election loss". He believes aggressive climate policies are turning off Labor's traditional blue-collar voters and were a big factor in its defeat at the last election.

Mr Fitzgibbon has a point. For Labor to regain power it does need to do a much better job attracting voters in regional areas, particularly in mining regions – many of which are in Queensland. The question is, as Mr Fitzgibbon would argue, whether pulling back on its climate change credentials is the right way to go.

The Age would argue that having a strong climate policy and capturing a larger share of blue-collar voters should not be mutually exclusive.

Labor’s own election review admitted that while its climate policies won votes with young and affluent older voters in urban areas, they "did not effectively discuss the cost of not acting on climate change or the job opportunities a transition to a renewable energy future could bring".

NSW Premier Gladys Berejiklian has recently shown one way to do it, rolling out an ambitious energy plan that will support the transition to renewable energy by attracting $32 billion of private investment in infrastructure to replace coal-fired power generation. She got the backing of her National coalition partner by promising to create more than 6000 construction jobs and 2800 ongoing jobs, mostly in regional areas, and, to top it off, cut the price of electricity.

It's a compelling case for change. Labor should take note. It does need to look after its blue-collar base, but it won't do that by offering false hope that mining jobs are going to be around for decades to come. They are not. Australia needs to urgently move on climate change. That won't happen until federal politicians on both sides of the aisle lift their game in making the case.

US president-elect Joe Biden has made it clear combating a warming planet is at the top of his policy agenda. When British Prime Minister Boris Johnson, who recently told Prime Minister Scott Morrison to take "bold action" on climate change, called to congratulate Mr Biden on his win, he expressed his hope the two nations would work closely on tackling global warming. Australia is being left behind on the global stage among Western liberal democracies.

The Australian Labor Party needs to stay the course in taking climate change seriously. But if it wants to get into government, it also needs to vastly improve its ability to make the case for change.

Note from the Editor

The Age’s editor, Gay Alcorn, writes an exclusive newsletter for subscribers on the week’s most important stories and issues. Sign up here to receive it every Friday.

Emma Roberts is getting closer and closer to her due date! The 29-year-old pregnant actress, who is expecting her first...

The hotly-anticipated final episode of Nicole Kidman and Hugh Grant’s epic crime thriller is finally here – but is it...