Australian Uighurs are calling on the Chinese ambassador to Australia to meet with them to explain why their loved ones have gone missing, following a highly choreographed press conference in which he and other Chinese officials failed to directly answer questions about alleged human rights abuses in Xinjiang.

In the two-hour media event on Wednesday at his Canberra residence, Cheng Jingye said the claims of genocide and mass detention camps in China were based on “anti-China forces” and “fake news”. 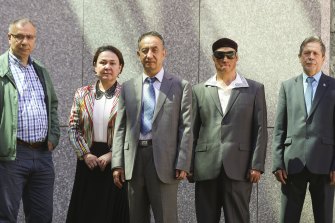 While Chinese officials in Xinjiang joined the press conference via video link, they repeatedly declined to say how many Uighurs were currently in detention in the far-western province, instead saying credible estimates of one million people being detained were “just fabricated”.

Bahtiyar Bora from the Australian Uighur Association said his organisation wanted Mr Cheng to sit down with them to hear their stories and answer their questions.

“There are several thousand Uighur people living in Australia and many of them have family living in China,” he said.

“So many of us living in Australia have lost contact with our loved ones and have no idea where they are.”

Ramila Chanisheff from Australian Uighur Tangritagh Women’s Association said she wanted Mr Cheng to meet with a small delegation from the Uighur community to “hear our views and tell us what has happened to the people we know who have gone missing”.

“If yesterday’s media conference was not a propaganda exercise then surely the ambassador would welcome an open dialogue,” she said.

“The democratic world must stand up for basic rights. We don’t want another genocide.”

During the press conference, Australian media were shown five videos with one entitled “Xinjiang is a wonderful land”.

When performing sound checks prior to the event, officials repeatedly said into the microphone in Mandarin, “Xinjiang is good”.

One ­Uighur woman said she had regarded ­terrorists as heroes and held extremist views, but after going to a vocational education camp her family notice she was more “outgoing and angelic”.

The charm offensive on the Australian media came after months of growing international condemnation over the treatment of Uighurs in the far-western province, with a BBC report earlier this year airing first-hand accounts of systematic rape, sexual abuse and torture in the detention camps. 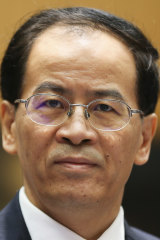 The Biden administration is considering a joint boycott of the 2022 Winter Olympics in Beijing in response to China’s “egregious” human rights violations, while the United Nations is holding negotiations with China on gaining unfettered access to the region to verify reports that Uighurs are being persecuted. The US and Canada have also declared that China’s treatment of ­Uighurs was “genocide”.

Mr Cheng said China was disappointed by Australia’s comments supporting the sanctions, saying nations should know Beijing will respond to any provocative actions that meddle in its internal affairs. He suggested that Beijing would respond to any country, including Australia, which followed the others in imposing sanctions.

“Any people or any country should not have any illusion that China would swallow the bitter pill of interfering or meddling in China’s internal affairs and trying to put so-called pressures on China,” he said. “We will not provoke, but if we are provoked, we will respond in kind.”