Melbourne’s performing arts and music industry is plunging into a double “Omicrisis” with a COVID-struck workforce and audiences abandoning existing bookings and wary of making new ones.

Will Ewing, director of the popular Brunswick Ballroom which closed its main room a week ago, said even before COVID-19 infections took out much of his staff (including himself), he and other venues about town had seen up to 60 per cent no-shows at sold-out events during the past fortnight, and a similar drop in ticket sales compared to the previous year. 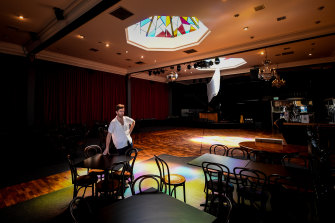 Will Ewing, co-director of The Brunswick Ballroom which has been closed for a week.Credit:Justin McManus

“It’s basically a lockdown,” he said. “We are again in a period where we don’t have any income… we’re going into uncharted territory.”

Simone Schinkel, chief executive of Music Victoria, said they hosted a Zoom meeting of 70 live music venues on Monday and were told the reintroduced density limit had cut 70 per cent of trade and “no-one’s business is operating at that rate”.

“There are less explicit and harsh directives from government this time but the result is the same,” she said. “There is a whole ecosystem being devastated, so many artists and musicians out of work with no support whatsoever. And we just don’t know what it’s going to take [to survive].

“We need to know what it’s going to take to get out of restrictions again. We have no future at the moment.”

We’re in a situation where it really becomes untenable as an industry to present shows on stage.

Torben Brookman, executive producer of hit musical Jagged Little Pill which opens this weekend, said after a surge of bookings last year they now have a steady number of people asking to move tickets later in the season, and “very limited” new ticket sales.

“We’re in a situation where it really becomes untenable as an industry to present shows on stage.”

He said the Victorian government’s event insurance introduced last month had not helped despite the company paying hundreds of thousands of dollars in premiums based on projected box office.

“The only way to claim on that policy to cover some of [our] operating losses is if the government does restrict access to venues – it’s a fairly ironic position,” he said. “There are no formal restrictions being put in place but at the same time all of the messaging from government is that people should not go out. So that’s massively problematic.”

The cancellation of the first week and a half of the run, due to cases of COVID within the company, was not considered insured under the government scheme.

A state government spokesman said so far the scheme has identified 11 events that may qualify for a claim, valued at $541,000, and is assessing them. No claims have been finalised to date. Policies pay out 50 per cent of the value of an event if government COVID restrictions reduce capacity, and 100 per cent if restrictions force cancellation.

Mr Brookman also appealed for the government to change its messaging on public events: for the vaccinated, he said, going to the theatre was safer than going to the shops.

“The chances of that aerosol transmission is really relatively low,” he said. “But what hasn’t been helpful was government messaging, particularly around the words ‘indoor mass gathering’ which are used quite a lot, and theatre is lumped in with that even though in practice we’re not aware of any significant instance of transmission within a theatre.”

Mr Brookman said there was an immediate need for short-term financial support to help get events and shows through the next four to six weeks.

Shows forced to close during that time “potentially won’t come back”, he said.

“We’re potentially left with a dearth of arts and entertainment for the next six months to a year.”

Lavish musical Moulin Rouge, which opened last year after repeated lockdown delays, has had a horror run with many of its 2022 performances to date cancelled due to COVID-19 cases in the cast: it plans to reopen next week.

Producer Carmen Pavlovic said there had been a “sizeable outbreak” in the company and the company was grateful to audiences for their patience and support.

Mr Ewing hopes to reopen the Ballroom before the end of January but isn’t confident: it could be a month or more.

“It’s a really scary time. We’re losing some of the fabric of our rich music scene.”

He suggested the government could waive liquor licences for entertainment venues, or deploy funds set aside for “reactivating” the scene.

Some shows are pushing through the crisis: Harry Potter and the Cursed Child producer Michael Cassel said the cast’s ability to “jump into various roles at a moment’s notice” helped keep it on stage. Unlike its sister show Hamilton in Sydney, it had so far not lost a performance.

He said “encouraging numbers” of people were coming to see the show, and the company – and industry – had done a huge amount of work “to ensure the health of our cast, crew and audience members”.

Overseas, Broadway is facing similar problems, with some shows closing their doors temporarily or permanently, while others try to ride out the latest challenges. Generally, productions that can afford a depth of understudies and “covers” are the most likely to keep the doors open.