The 2021 regular season of the NFL got underway on Sept. 9 with the Tampa Bay Bucaneers taking on the Dallas Cowboys at the Raymond James Stadium in Tampa, Florida, and while that’s exciting, it was Michelle Williams‘ rendition of the national anthem that gave us goosebumps.

The former Destiny’s Child singer’s performance was so good that it was widely praised on Twitter — even former star wide receiver Chad Johnson said, “Michelle killed the National Anthem”. Bill O’Reilly also enjoyed it — afterwards, he tweeted, “Excellent rendition of the National Anthem by Michelle Williams in Tampa. Inspiring. Great to see that!”

The performance also makes us want a Destiny’s Child reunion even more than we already did. Fortunately for us, Michelle recently said she’d love to reunite with Beyonce and Kelly Rowland and make some more music together. 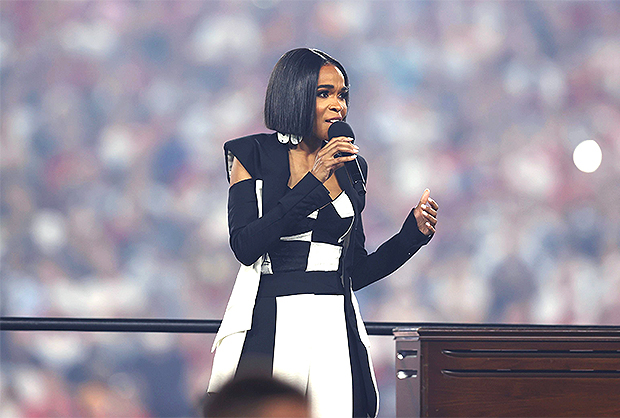 “Now, I would be lying if I said I wish we weren’t still together,” Michelle wrote in her new book, Checking In: How Getting Real About Depression Saved My Life – and Can Save Yours. “I don’t know if I want to do another 60-city tour. We ain’t 25 anymore, you feel me? But I am going to just put this out in the atmosphere: B, Kelly, if you’re reading, we could always cut a short album, maybe do a mini tour. Popeyes on me!”

Michelle also admitted it “felt like someone had detonated something nuclear in my life” when the group parted ways professionally in 2006. “But, looking back, I shouldn’t have been that surprised,” she wrote. “I mean, the name of our last album was Destiny Fulfilled. Logically, I could see how Kelly and Beyoncé were ready to be done. They’d been in Destiny’s Child since they were 9-years-old – much, much longer than I had. And for them, it was a good time to end. But emotionally I was spinning like a top. In fact I had a hard time even believing it.” The singer admitted that she was “in denial” and thought the group would do “a couple more tours.”

Maybe there’s hope for the future?

19 Jul 20
Youtuber and comedian John Crist, 36, is back in the social media spotlight following an…
Lifestyle
0

1 Apr 20
Is it just us or is Frankie Bridge nailing isolation style? She may be tucked…
Lifestyle
0