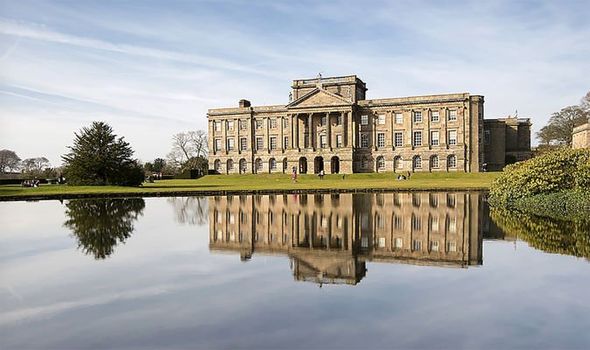 But more frequent and extreme episodes of heavy rain have caused flooding at the National Trust’s Lyme Park in Cheshire, sweeping tons of silt into the lake.

The estate is just one of more than 20,000 of its sites that the conservation body estimates are at risk due to climate problems.

Deborah Maxwell, general manager at Lyme, said: “If Mr Darcy were to jump into one of the lakes and reservoirs at Lyme today, he would be in for quite a shock. Over the years, flooding has caused silt to build up…so they are much shallower.”

Other properties and sites are threatened by drought, landslides, coastal erosion and strong winds.

The National Trust said that without action to cut global greenhouse gas emissions, the number of its 67,426 sites that will be at high or medium risk of climaterelated hazards could soar from 20,457 (30 percent) last year to 47,888 (71 percent) by 2060.

“Warmer, wetter winters and hotter, drier summers mean hazards such as flooding, intense rain, drought and overheating will become more frequent. Understanding these hazards is the first step towards adapting to these challenges, which will allow us to continue to conserve our heritage for future generations.”

The National Trust has drawn up a list highlighting where the risks are most severe. Historic sites in danger include:

Harry Bowell, its director for land and nature, said: “By acting now, and working with nature, we can adapt to many of these risks.

“Measures include planting trees, restoring peatlands, slowing the flow of water in flood-prone river valleys and preparing our places and collections – as well as staff and volunteers – for the increased heat and humidity.”

The Daily Express is calling for better protection for nature with a Green Britain Needs You crusade.

ENDANGERED water voles – the inspiration for “Ratty” in The Wind In The Willows – have been handed fresh hope of survival.

A £1.6million scheme to restore a chalk stream to its former glory will provide a lifeline for Britain’s most rapidly declining mammals.

Water voles, pictured, will get new haunts thanks to the National Trust and Environment Agency project.

Norfolk as man-made barriers such as mills infrastructure are removed. Dragonflies and toads along the eight-mile stretch of river, which feeds into the Norfolk Broads, will also be boosted by the restoration of lost farm ponds and wetlands.There are only 210 chalk streams in the world and 85 per cent are in England.

But the crystal clear waters are suffering from pollution from farm run-off, abstraction for water supplies and being straightened for navigation.

The National Trust’s Emily Long said: “Chalk streams are our rainforests. Protecting these special habitats, as well as the species they support, is fundamental in our battle against the biodiversity crisis.”

THE Beckhams have been told to build boxes for birds and bats if they want permission for a new wildlife-friendly outhouse.

David and Victoria applied for planning consent for an eco office and quad bike storage facility at their £6million Cotswolds home.

It would have an open roof structure to provide an “attractive environment for nesting birds and bats”, plans reveal. But West

Oxfordshire Council told the couple, above, to boost biodiversity, including planting at least six tree species to create “native” hedgerows nearby.

The building, at their Grade-II listed mansion at Maplewood Barn, near Great Tew, will need at least a bird and a bat box and “no external lighting” that could harm wildlife.

Ecologists employed by the couple said there would be little impact on bats and only “a few common species of birds” were found.

The Beckhams also have a £31million home in London, and a £19million penthouse in Miami. 20 Sep 21
Love Love Island? Our Factor 50 email brings all the goss direct to your inbox…
Lifestyle
0