My Salinger Year is the film version of Joanna Rakoff’s best-selling memoir about life in the New York literary agency which acted for J.D. Salinger. 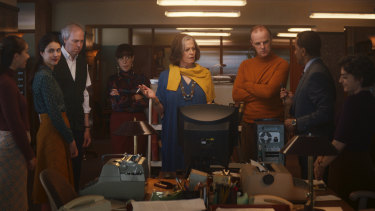 Sigourney Weaver in My Salinger Year.

It’s the 1990s but “the agency” is a timeless zone governed by an imperious Sigourney Weaver with a white streak through her hair and a cigarette holder clamped semi-permanently between her teeth. She’s cast as Margaret, a fictional alter ego of Phyllis Westberg, boss of Harold Ober Associates who represented Salinger for years.

A traditionalist, Margaret regards the agency’s newly acquired desktop computer as a sinister harbinger of a future she’s keeping at bay as long as possible. It sits in the middle of the office, available only a last resort. Her only other concession to the modernisation of the 20th century office has been to embrace the Dictaphone and retire the manual typewriter in favour of its electric successor.

Joanna (Margaret Qualley) is an intern whose ambitions as a writer don’t interest Margaret in the least. Consequently, she’s not yet trusted to read and assess manuscripts. Instead, she’s assigned to type stock replies to Salinger fans, who write in their hundreds to give him their life stories, ask for advice and express their eternal devotion to Catcher in the Rye and its self-reflective hero, Holden Caulfield.

French-Canadian writer-director Philippe Falardeau has captured all of the book’s charm, producing a trip into the recent past with a slightly gentler atmosphere than the one which prevailed during the buccaneering Mad Men decades. It’s the tag end of an era in which publishing and journalism still preserve a sense of history, as well as fostering their faith in an ever-expanding future for the literary arts and although Margaret is certainly a devotee of the Martini lunch, she takes her role as mentor seriously.

On the debit side, Joanna’s penniless and pretentiously left-wing boy-friend, Don (Douglas Booth) is an especially confident product of the times. Boosted by Joanna’s willingness to pay all the rent on their cold and cheerless Brooklyn apartment, he’s hard at work on his first novel, which he believes to be wonderful. It’s when she begins to read it that she falls out of love with him.

Margaret eventually reveals her softer side – as we already know she will – but Falardeau deftly avoids any risk of lapsing into the cliche-ridden. He consulted Rakoff regularly while writing the screenplay and every character – including Salinger, who makes a couple of brief appearances – emerges fully drawn, no matter how few their lines of dialogue.
It’s a coming-of-age story told with a sophistication that only makes it all the more touching. In recalling her youth, Rakoff is revisiting a time which has a nostalgic glow attached to it for anyone remotely interested in the power of the written word.

Find out the next TV shows, streaming series and movies to add to your must-sees. Sign up to get it every Thursday.