Indian Prime Minister Narendra Modi has called for democracies to work together in cyberspace to prevent conflict and coercion, warning technology and data are the “new weapons” in today’s world.

Mr Modi also confirmed India was preparing a package of incentives in a bid to become a key manufacturer of semiconductors as China looks to become a powerhouse in the critical technology. 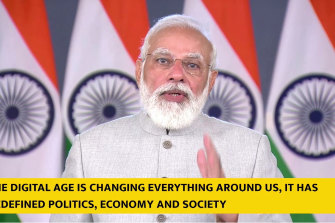 In the keynote address to the inaugural Sydney Dialogue, Mr Modi on Thursday also cautioned that the biggest strength of democracy is openness but “at the same time, we should not allow a few vested interests to misuse this openness”.

The warning came on the same day Australia’s top cyber spy confirmed the nation’s ability to engage in offensive cyber attacks was now a “mature” capability that could “greatly shorten” a ­future conflict.

Prime Minister Scott Morrison last year revealed there had been a wave of sophisticated cyber attacks on critical infrastructure in Australia. The nation’s security agencies believe China was behind the cyber raids, but the government decided not to publicly name the state actor involved.

Mr Modi said it was “essential for democracies to work together” to defend against cyber attacks, share intelligence and counter misinformation and foreign interference.

“Technology and data are becoming new weapons,” he said.

He said the world was in a “time of change that happens once in an era” and the digital age was “changing everything around us”.

“It has redefined politics, economy and society. It is raising new questions on sovereignty, governance, ethics, law, rights and security,” he said.

“It is reshaping international competition, power and leadership. It has ushered in a new era of opportunities for progress and prosperity.

“But we also face new risks, and new forms of conflicts across diverse threats from sea-bed to cyber to space. Technology has already become a major instrument of global competition and key to shaping the future international order.”

Mr Modi did not touch on India’s own efforts to use technology to crackdown on freedom of communication, such as its shutdowns of the internet in the Kashmir region.

Writing in The Sydney Morning Herald and The Age earlier this week, Human Rights Watch Australian director Elaine Pearson said Mr Modi’s government had been “using technology since it came to power in 2014 to curtail rights at home as part of an escalating crackdown on freedom of expression, association and peaceful assembly”.

“Even as his government promotes a more digitally connected India, it shuts down the internet more than any other country in the world, increasingly to silence peaceful protests and criticism of the government. This has not only denied millions of people their fundamental rights, but has also affected businesses and cost the Indian economy billions of dollars in losses.

Earlier on Thursday, Australian Signals Director boss Rachel Noble noted the future of warfare was predicted by some to be “more likely to begin in cyberspace”.

“In cyberspace, ASD is increasingly becoming the first and last line of digital defence that protects our country from cyber attacks, and thwarts those who seek to attack Australia by launching offensive cyber operations of our own,” she said during a speech at the National Press Club.

22 Jul 20
By now, you’ve had plenty of time to stock up on cloth face masks from…
Lifestyle
0