Damn the ukulele. To hell with smorgasbords. Bugger Schadenfreude. If English is to flourish, it needs to be pure. Maybe the horse has bolted, given our wanton history, but collective action may yet save our pedigree. Why rely on other tongues to do the talking for us? 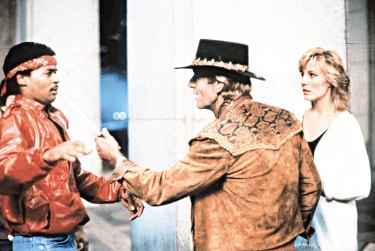 Call that a couteau? The French love Crocodile Dundee but not our slang.Credit:Fairfax Media

Of course, we’ll keep that tiny four-stringed guitar. It’s too cute to lose; we’ll just ditch its name. Ditto for the Scandi-buffet. Let’s hang onto the self-serve feast, but lose that Swedish handle. As for Schadenfreude, I can’t wait to see those sad-sack Germans realising we’ve ghosted their smug darling.

Weird way of thinking, right? Weirder than Schadenfreude. To imagine you might protect a language from foreign compromises, the exercise as hapless as those Albury-Wodonga vigilantes (circa 1971) pretending they could keep fruit flies from buzzing across the Murray.

Yet that’s been the mindset of Académie Française for the past 400 years, a body vested with turfing any alien words off the parapet, lancing Anglicisms, ousting Russian compounds, loading any Italian ingredient into the trebuchet.

Luminaries such as Jules Verne, Emile Zola and Gustave Flaubert were once part of the semantic militia. Indeed, of the 732 immortels (as they’re dubbed), only nine have been femmes. Which makes sense, really. Who else could imagine they might govern the national dialogue than a cabal of grammatical mansplainers?

Over the years, with blue pencils and natty green vests, the immortels cocked a snook at weekend and hamburger, jungle and jogging. A grand gesture. However, you can still meet those words in a Pigalle lane, along with a tsunami (another word they tried to banish) of new tech terms, from blog to tweet, chatroom and photobomb.

According to Pierre-Yves Modicom, a French linguist, the old watchdog is losing its teeth, presuming the mutt had choppers for starters. “The Académie was tasked with writing an official grammar, which they never wrote; an official dictionary, where they only managed eight editions in four centuries. And an official treaty of poetry, which they never produced.” Nice work if you can get it.

Lately, the group’s been under renewed fire thanks to a certain Australianism. Or at least a phrase bragging dinkum lineage beneath its French camouflage. Pas de souci (exclamation mark optional) literally means no worries, a catchcry central to la vie Australienne, and Parisians have had a gutful.

Ugg boots are one thing. Crocodile Dundee and cancelled submarines. But the minute Australian life tries to infiltrate the language of love, then the haters proliferate. Last week I chatted with Modicom, whose recent piece in The Conversation outlines the contretemps. As he says, “The phrase has been a media target for months now, as lots of the French public find it rude, as well as being an English borrowing.”

Two strikes, then. Not only do French speakers resent the expression’s cavalier vibe, which does seem a tad perverted, but the same bugbear is deemed a squalid import, albeit dressed in French clobber.

De rien (you’re welcome) was fine. Why change it? Where’s the bloody Académie when you needed it, seemed the sentiment. Too busy turning hashtag into mot-diese (word-hash) or wi-fi into accès sans fil à l’internet, despite every Frenchman and his Fifi saying wee-fee.

Language purity is a common ideal that’s seldom achieved. Albanian or Zulu, most tongues are tempted by the world’s smorgasbord, adding exotic flavours or concepts their own plates lack. (The immortels are dead – long live the immortels!) Though perhaps their ultimate battle will be pitched against no wuckers, surely the final effrontery.

TV, movies, Find out the next TV, streaming series and movies to add to your must-sees. Get The Watchlist delivered every Thursday. 25 Nov 21
When you head off on holiday, leaving your pet in a shabby cattery can leave…
Lifestyle
0
23 Feb 20
Dwyane Wade reiterated a message near and dear to Kobe Bryant’s heart at his jersey…
Lifestyle
0 23 Jul 21
Join the OK! VIP newsletter and receive big exclusives to your inbox before anyone else!…
Lifestyle
0