Liberal powerbroker Alex Hawke has threatened a dramatic federal intervention in NSW that could lead to candidates being imposed in key seats across the state, during a heated meeting of the party’s state executive.

And while Prime Minister Scott Morrison and NSW Premier Dominic Perrottet want the timing of federal preselections sorted quickly, they are at loggerheads over potential candidates, with Mr Perrottet resisting attempts to poach state MPs. 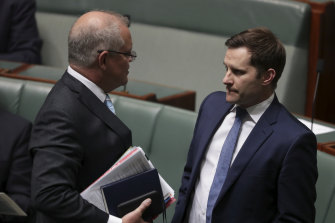 The Prime Minister and Premier twice discussed the much-delayed selection of candidates for crucial marginal seats including Hughes, Gilmore, Eden-Monaro, Warringah, Parramatta and Dobell during face-to-face meetings about other issues last week. They are due to speak again next week about the matter.

While Mr Perrottet is reluctant to get involved in the factional dispute, he has made clear his displeasure that state MPs Melanie Gibbons and Geoff Lee have been wooed to resign from their state seats of Holsworthy and Parramatta – which would force two more byelections on a minority government already facing three – to have a tilt at winning the federal seats of Hughes and Parramatta.

With the federal election due no later than May 2022, time is running out in Mr Morrison’s home state to choose candidates and then let them loose on the campaign trail.

Coalition strategists believe the government could lose up to three seats in Western Australia and that Labor will gain at least one seat in Victoria, because of seat re-distributions, and they believe it will be difficult to hold on to all their seats in the volatile states of Queensland and Tasmania.

Mr Morrison’s most likely to path to victory in the next federal election runs through NSW where a raft of marginal seats are being targeted by the Coalition.

At Friday night’s state executive meeting, members of the moderate and conservative factions defied a push from Mr Hawke, who is federal Immigration Minister and Mr Morrison’s consigliere in the centre right faction – and teamed up to back a motion for nominations for federal seats to close on December 3.

The Sun-Herald and The Sunday Age have spoken to five people on the executive who attended the meeting from across all three factions and all confirmed that, in response, an angry Mr Hawke warned that federal intervention to impose candidates was now a live option.

An ally of Mr Hawke’s, who asked not to be named so they could discuss internal party matters, said that “federal intervention is now being actively discussed because the PM and the Premier were rolled” by the passing of the preselection timetable.

That ally said they were hopeful Mr Morrison and Mr Perrottet could strike a deal next week to end the impasse over preselection timing and who can run.

And while they expressed sympathy for Mr Perrottet not wanting to face more byelections, the person said “it’s a real survival situation, we both want the same people. At the moment the plan is the PM and the Premier will work it out, but intervening to impose candidates is the reserve option.”

But Liberal moderates and conservatives, who also asked not to be named, said that Mr Hawke had repeatedly delayed preselections this year with a view to imposing candidates at the last moment – rather than allowing party rank-and-file members vote in plebiscites to choose their candidates. 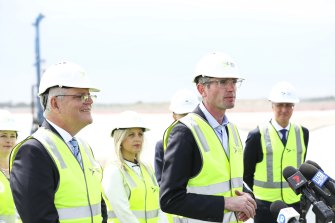 “This is about Alex Hawke bolstering his numbers in Canberra, he doesn’t want preselections, he wants to impose his candidates in every seat but we want people to actually have their say,” one moderate said.

A conservative member of the executive said “we don’t live in a dictatorship, party members deserve a say. It’s embarrassing that they don’t trust party members to choose candidates in key seats. They [the Centre Right] decided on Warren Mundine in Gilmore last time and how did that work out?”

“It’s extraordinary they are threatening federal intervention. Do we really think the PM is going to, months out from an election, intervene in the state division and dissolve the executive in order to deny members a vote?”

Both moderates and conservatives said they would agree to a changed timeline for nominations and preselections if Mr Morrison and Mr Perrottet strike a deal next week, ahead of or at a meeting of the federal executive – but they insisted the plebiscites should go ahead.

Mr Constance faces a three-cornered contest in Gilmore, with Paul Ell and the Hawke-backed Jemma Tribe also in the mix.

In Eden-Monaro, Fiona Kotvojs – who has previously run in the seat – is in the mix, as is Queanbeyan-based federal senator Jim Molan. His daughter, the well-regarded rugby league commentator Erin Molan, had been approached but turned it down.

The formerly Liberal-held seat of Warringah, once held by Tony Abbott but now held by independent Zali Steggall, is at this stage a contest between Alex Dore and Jane Buncle, though some Liberals are still hopeful Ms Berejiklian will run despite the shadow of the ICAC hanging over her head.

In Dobell, businesswoman Jemima Gleeson is said to enjoy the backing of the centre right, former Test cricketer Nathan Bracken is also in the mix but cardiologist Michael Feneley has the backing of the moderates and conservatives.