Since Pokémon Legends: Arceus debuted on Jan. 28, fans of the franchise have been making their way through the Nintendo Switch game. Many have gotten to the point of catching the Legendary Pokémon at the very end. And Pokémon Legends: Arceus introduces a new Legendary into the mix: Enamorus. How can players add this Pokémon to their Hisui Pokédex?

Pokémon Legends: Arceus gives trainers the chance to add plenty of well-known Pokémon to their Hisui Pokédex, but it also features a variety of new additions. Most of them are Hisuian forms of already-established Pokémon or Hisuian evolutions. However, the Nintendo Switch game does add one completely new Legendary: Enamorus.

Enamorus is the latest member of the Forces of Nature, joining the trio of genies: Landorus, Thundurus, and Tornadus. According to Bulbapedia, the Fairy/Flying-type Pokémon is the God of Spring. And its pink exterior matches its seasonal title.

With Enamorus just joining the franchise, players will no doubt be eager to add it to their lineup of Legendary Pokémon. So, how can they find and catch it in Pokémon Legends: Arceus?

Players must catch the other genies before going after Enamorus 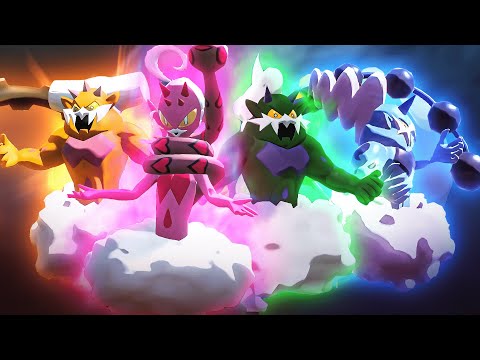 In order to capture Enamorus in Pokémon Legends: Arceus, players must first add the other three Legendary genies to their Pokédex. To do this, they need to beat the main story mode and complete Mission 26, “Seeking the Remaining Plates.” Once they’ve done so, they can head to Galaxy Hall in Jubilife Village. There, Cogita should present Request 94 – Incarnate Forces of Hisui.

This request enables players to start looking for Landorus, Thundurus, and Tornadus — and eventually Enamorus. The original trio can be found in the following locations during the listed weather conditions:

In addition to catching the other three Forces of Nature, IGN notes that players must also get them to research level 10. This means completing their entries in the Hisui Pokédex — which could take some time and additional battling.

After that’s complete, visit Cogita at the Ancient Retreat. She’ll prompt you to find Enamorus, which is easy enough to do afterward.

Where to find Enamorus in ‘Pokémon Legends: Arceus’

After meeting all the above requirements, Pokémon Legends: Arceus players can set out in search of Enamorus. They can find the God of Spring in the Scarlet Bog area of the Crimson Mirelands region. Like the other three Forces of Nature, Enamorus will be shielded by winds — so players will have to hit it with an item to engage it in battle.

Once they do, it’s all a matter of lowering its HP and capturing it. That’s a necessity for anyone intending to catch all of the Pokémon in the new Nintendo game.