Prince William ‘simply can’t forgive Prince Harry’ for his behaviour because ‘he always thought his brother would be his wingman’, claims royal author

Prince William ‘simply can’t forgive’ Prince Harry for the way he has behaved – and ‘always thought his brother would be his wingman’, a royal expert has claimed.

Katie Nicholl, author of The New Royals – Queen Elizabeth’s Legacy and the Future of the Crown, claimed the new Prince of Wales, 40, is unlikely to let bygones be bygones – despite putting on a united front with the Duke of Sussex, 38, during a walkabout in Windsor following the Queen’s death.

Speaking on Dan Wootton Tonight, Ms Nicholl said: ‘William simply can’t forgive [Harry], not just for his behaviour and what he’s done and how he’s done it, but look at how much now rests on William.

‘He always thought Harry would be his wingman, now he’s doing it on his own. Thank goodness he’s got Kate by his side,’ added the author.

In the book, soon to be published about The Firm, Ms Nicholl addresses the deepening division between the Sussexes and other members of the Royal Family after Harry and wife Meghan Markle decided to step down as senior royals and begin a new life in the US in 2020.

Following their relocation, the Duke and Duchess have spoken critically of The Firm to American media. Most recently, in her controversial interview with The Cut magazine, Meghan said it takes ‘a lot of effort’ to forgive and hinted that she can ‘say anything’, in what was seen by some as a thinly-veiled threat to the Royal Family.

She also said that ‘just by existing’ she and Harry were ‘upsetting the dynamic of the hierarchy’ before they stepped down as senior working royals. 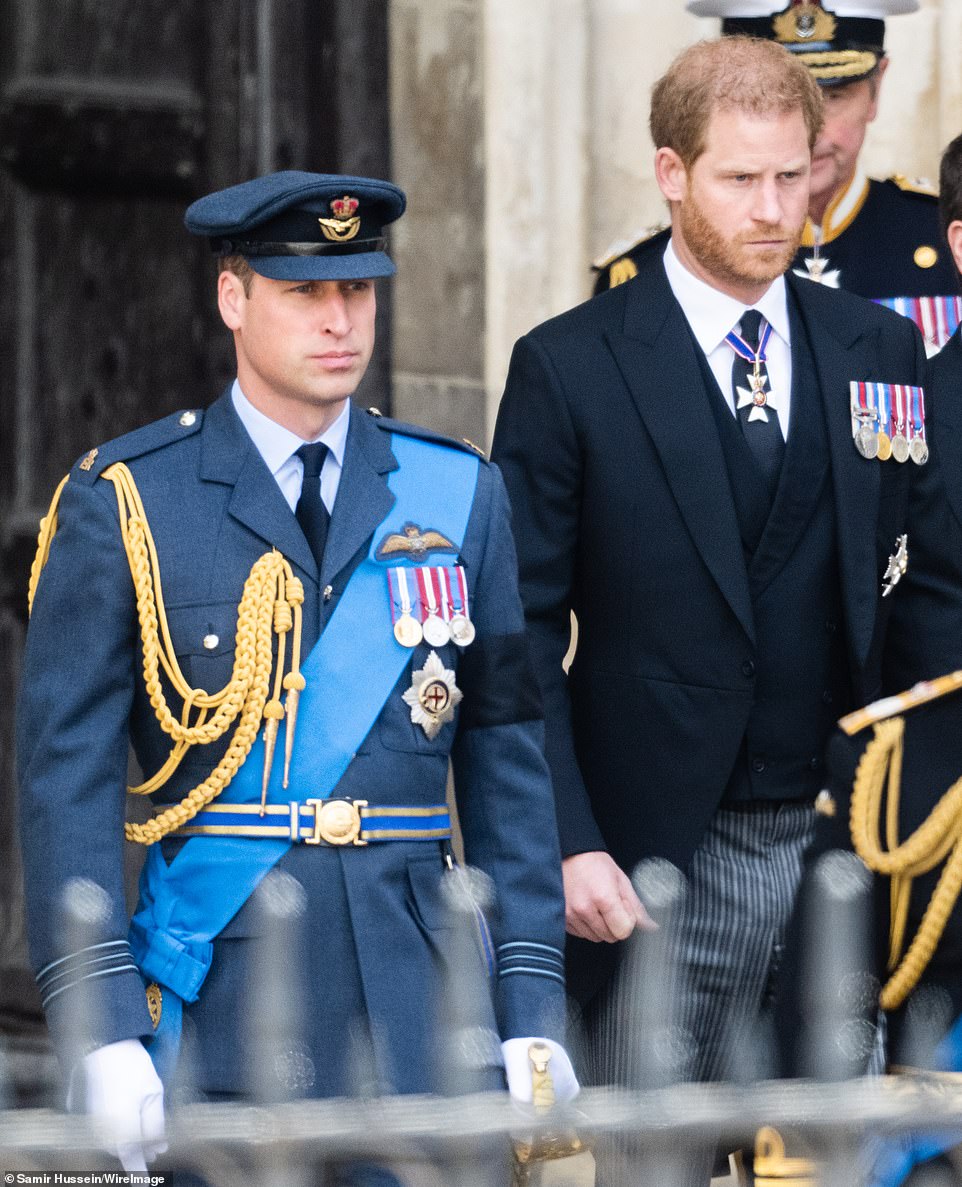 Prince William ‘simply can’t forgive’ Prince Harry for the way he has behaved – and ‘always thought his brother would be his wingman’, a royal expert has claimed. Pictured, the brothers at the Queen’s state funeral on Monday 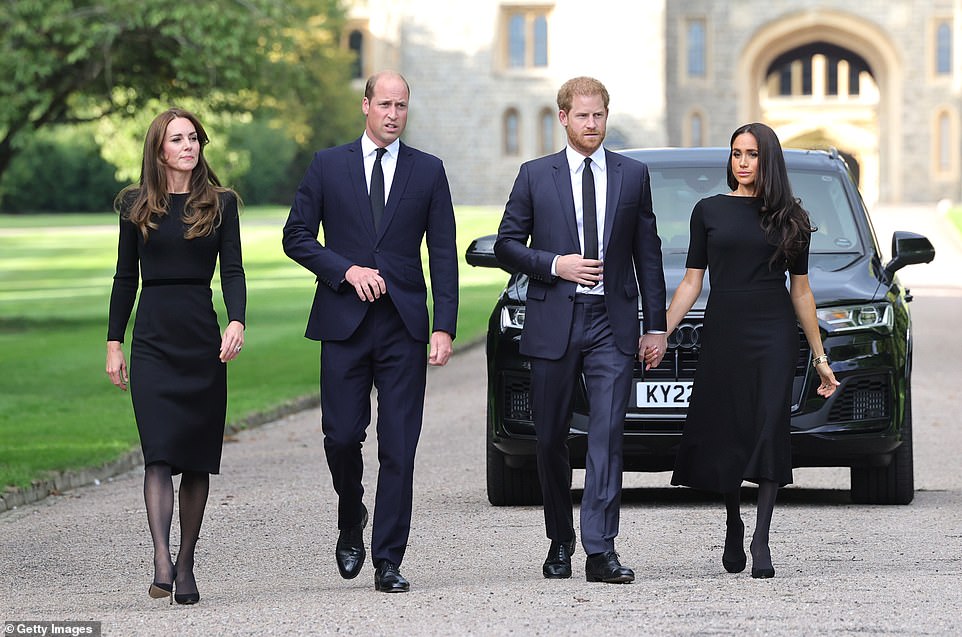 Katie Nicholl, author of The New Royals – Queen Elizabeth’s Legacy and the Future of the Crown, claimed the new Prince of Wales, 40, is unlikely to let bygones be bygones – despite putting on a united front with the Duke of Sussex, 38, during a walkabout in Windsor (pictured) following the Queen’s death 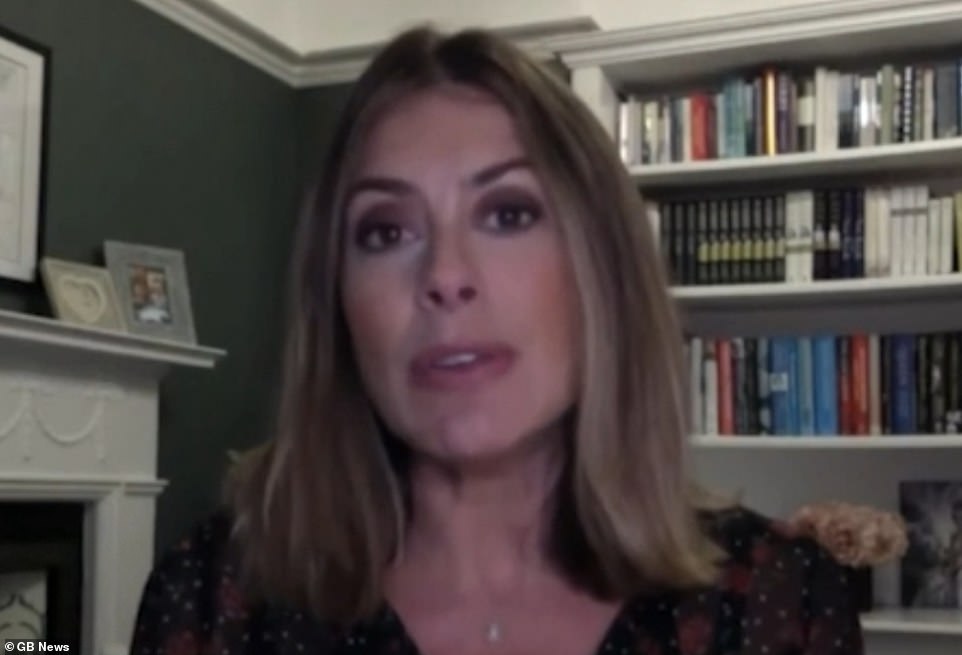 Speaking on Dan Wootton Tonight, Ms Nicholl (pictured) said: ‘William simply can’t forgive [Harry], not just for his behaviour and what he’s done and how he’s done it, but look at how much now rests on William’

Elsewhere in her book, Ms Nicholl wrote that William and wife Kate ultimately felt ‘relief’ when Harry and Meghan announced their decision to move to the US, because they felt that the ‘drama was gone’.

William is also reported to have held a summit of aides – which came to be known as the ‘Anmer Summit’ after the couple’s Norfolk home – to discuss the Royal Family’s future in the wake of his move to the States.

Despite the reported rift between the Sussexes and the rest of the Royal Family, there have been glimpses of a potential reconciliation following the Queen’s death.

It had originally been reported that Harry and Meghan were not planning on meeting with William and Kate during their stay in the UK.

But on the Saturday after the monarch passed away, the Prince and Princess of Wales made their first public appearance outside the Windsor Estate to read tributes that had been left to Her late Majesty and greet mourners.

In an unexpected appearance, the Duke and Duchess of Sussex joined the couple as the ‘Fab Four’ were reunited in their grief. 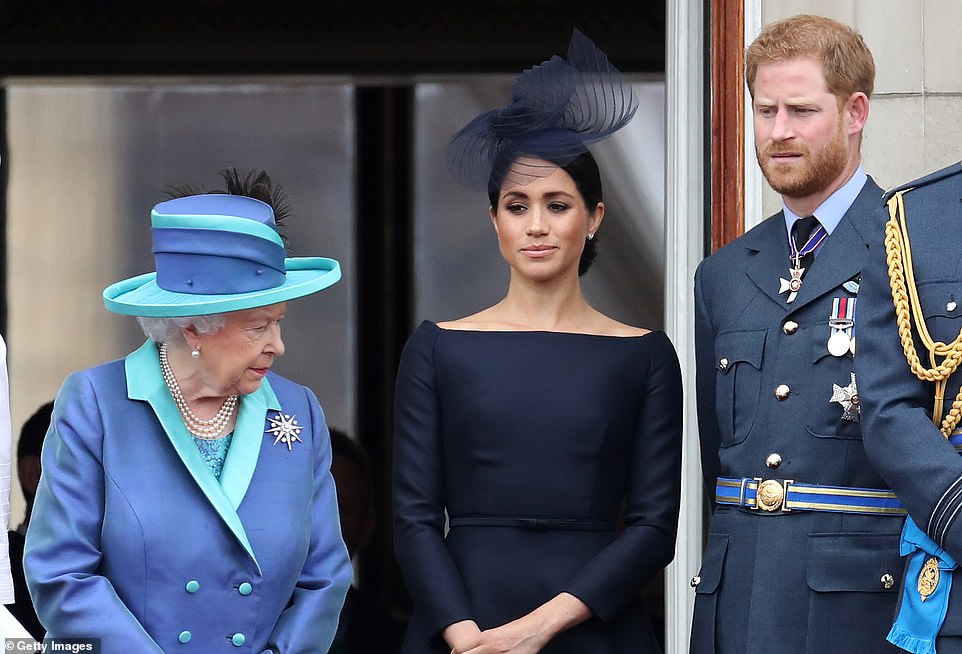 Meanwhile, a source close to the Queen has claimed Meghan and Harry’s decision left Her late Majesty ‘very hurt’ and unable to think about the situation. Pictured: Her Majesty stood next to the Duke and Duchess of Sussex on the balcony of Buckingham Palace in 2018

Ms Nicholl said the Queen was left ‘hurt and exhausted’ by Harry and Meghan’s decision to step down as senior members of the Royal Family and move to the US.

She says in her book that a source close to Her late Majesty claimed she didn’t like to think about the Duke and Duchess’s decision to leave the family.

An extract of the book, which has been published in Vanity Fair, revealed the Queen was also disappointed when Harry and Meghan didn’t return to the UK in August with Archie and Lilibet, where she was hosting an annual ‘sleepover’ in Sandringham with her grandchildren and great-grandchildren.

The source told the author: ‘[The Queen] was very hurt and told me, “I don’t know, I don’t care, and I don’t want to think about it anymore”.’

They added it was of more regret to Her late Majesty that the Sussexes’ move meant she did not have the opportunity to see as much of Archie and Lilibet as she’d have liked.

The Queen passed away at Balmoral Castle on 8 September at the age of 96, at which point her eldest son Charles automatically became King.

As the monarch, the book claims Charles is keen to heal the rift between the family and his youngest son Harry, 38.

In his first televised address to the nation on 9 September, King Charles said: ‘I want also to express my love for Harry and Meghan as they continue to build their lives overseas.’ 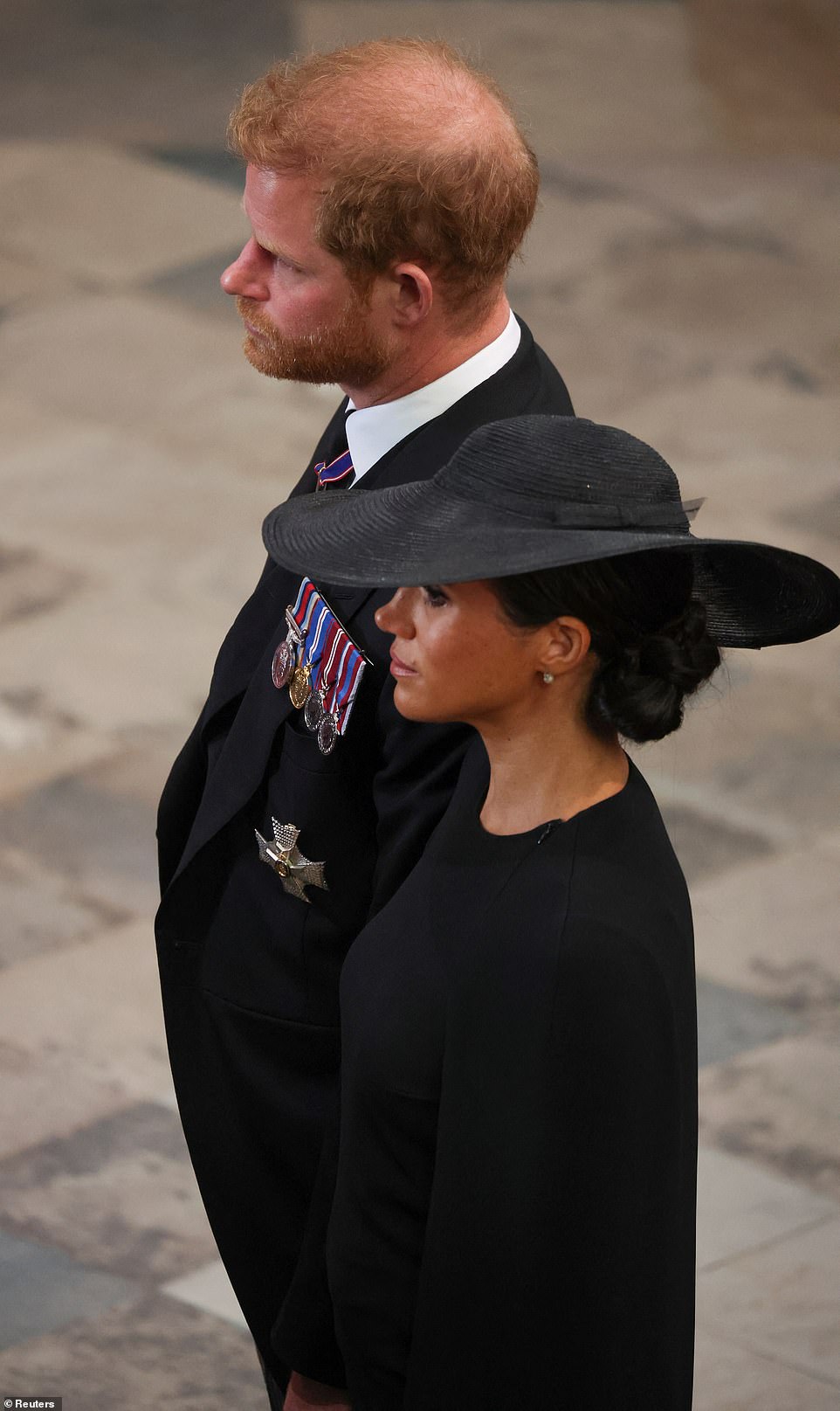 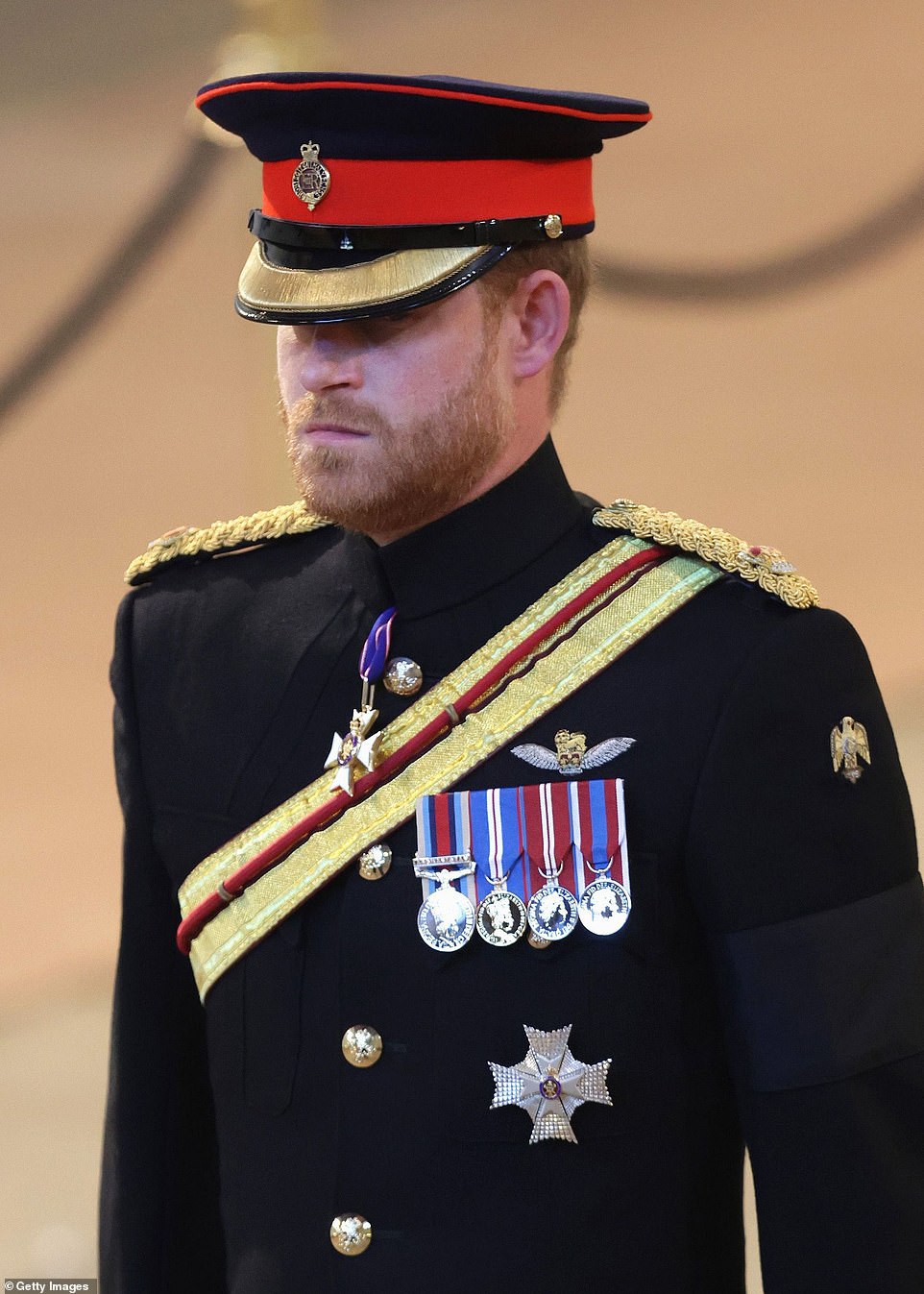 King Charles permitted Prince Harry (pictured), who served in Afghanistan, to wear his military uniform as he took part in a vigil on Saturday night in which he guarded the Queen’s coffin in Westminster Hall

Some royal fans have claimed the mention of the Duke and Duchess of Sussex was an ‘olive branch’ towards the couple, who happened to be visiting Europe when the Queen passed away.

Harry and Meghan, who now live in a $14million mansion in Santa Barbara, California, extended their trip and remained in Frogmore Cottage on the Windsor Estate during the period of mourning following the Queen’s death and for her state funeral, committal service and private burial on Monday.

King Charles allowed Prince Harry, who served in Afghanistan, to wear his military uniform during a vigil last Saturday night along with the Queen’s other grandchildren, in which they guarded her coffin as it lay in state in Westminster Hall.

Despite the fact he is no longer a working royal, King Charles granted his youngest son permission to don the military uniform so he could pay his respects to his grandmother.

After Harry and Meghan left The Firm in February 2020, relations became strained between the Duke of Sussex and his father and brother.

The rift in the family deepened a year later when the Sussexes took part in an explosive interview with US presenter and journalist Oprah Winfrey, in which they made controversial claims about the Royal Family.

These included allegations of racist comments towards Meghan while she was pregnant with their first child, and concerning claims that the family did not act to help her when she was suicidal and it was not safe for her to be left on her own.

Prince Harry is also said to have written a tell-all book on his life within the Royal Family – although questions over whether it will be still be published as planned remain.