Faith-based schools that want to reserve the right to discriminate against potential teaching hires will have to set out a public statement of their beliefs, under proposed laws that critics say will entrench the power of religious groups to reject people based on their sexuality or gender.

The revised Religious Discrimination Bill gives religious schools a right to positively discriminate in their employment practices and includes a clear statement of intention to override state laws, including those being pursued by the Victorian government to restrict this right. 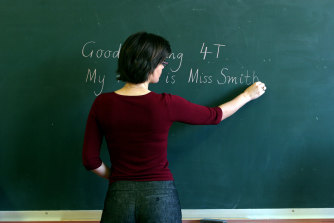 The proposed Religious Discrimination Bill will give schools a right to hire teachers in line with their religious beliefs, which must be set out in a publicly available statement.Credit:Cathryn Tremain

It also states that religious bodies will not be discriminating against someone if they engage in conduct that someone of the same faith “could reasonably consider to be in accordance with the doctrines, tenets, beliefs or teachings of that religion”.

The bill has alarmed LGBTQI groups and some legal experts who say it will licence discrimination against gay teachers and students. But religious schools have welcomed the measures as providing a clear national framework that will allow them to proactively hire staff of their own faith, and create consistency by overriding patchy state laws.

Jacinta Collins, Executive Director of the National Catholic Education Commission, said the issue of sacking gay teachers was a “red herring”, and not relevant to this bill because it does not change existing exemptions in the Sex Discrimination Act. Under those exemptions, religious schools can lawfully discriminate against LGBTQI staff and students, including by sacking or expelling them.

“This bill doesn’t change any of that,” Ms Collins said. “It codifies a right to religious freedom, which we should have codified a long time ago.”

“We have many gay teachers, but if those people are happy to operate within our religious ethos, then great. If they want to start challenging that, or challenging the code of conduct in other ways, then that’s something that we have to address on a case by case basis as we do other matters, not related to people’s various attributes.”

“It absolutely expands their rights in the ways that no other industries in this country has ever been given this kind of privilege to discriminate against others,” she said.

“It seems to me that the combination of provisions allows faith-based schools carte blanche in being permitted to discriminate against students on the basis of any attribute they have – disability, sexual orientation, gender, and others. In respect of employment they have a very similar, but perhaps slightly narrower, carte blanche in terms of who they employ providing they have a policy.”

“This could mean LGBTIQ+ teachers are sacked for not conforming to religious tenets, and LGBTIQ+ students are forced to learn in classrooms where homosexuality is denounced as ‘intrinsically disordered’,” he said.

Christian Schools Australia public policy director Mark Spencer said schools were not seeking “to be the bedroom police” but wanted the ability to ensure teachers reflected their beliefs.

“If we do become aware of behaviour or conduct – whether it is homosexual, whether it’s heterosexual outside the bounds of marriage – we feel we need to act on it right, raise that with the person concerned, and be honest about who we are, and where we stand on these issues,” Mr Spencer said. “It could lead to termination of employment.”

The Australian Council of Jewish Schools, which represents 21 Jewish schools across Australia, said it did not have a position on the bill.

Bilal Rauf, spokesman for the Islamic Schools Association of Australia, said the bill would provide significant protection for Muslim people who were readily identifiable by virtue of their clothing, such as veils. But he said the positive employment right was less important for Islamic schools.

“It’s not a big issue. For example, take Malek Fahd, the biggest Islamic school in Australia. It has a principal who is Christian and it has a chairperson of the board who is a Christian,” Mr Rauf said.

“I think it’s fair to say that it’s a matter of practice for a lot of Islamic schools to focus more on trying to find the right person for the role.” 28 May 21
Children pretending they have mouth piercings are swallowing tiny magnets. Two children were forced to…
Lifestyle
0