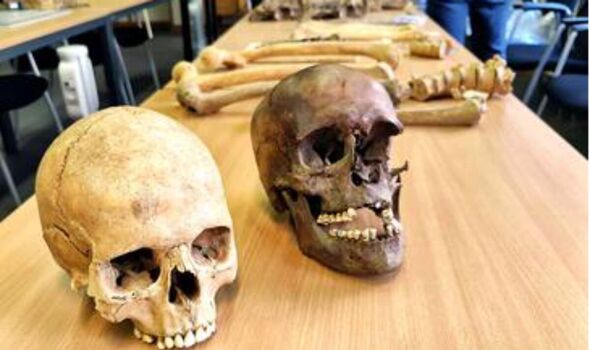 Experts believe they may have stood together, holding a crucial high ridge overlooking the battleground as the French advanced uphill to meet them. Throughout much of the mayhem, they proudly stood their ground in their red uniforms. But at some point, one was almost certainly felled by a careering cannonball.

The five others were also killed though, so far, we do not know how they met their fate.

At least one of the men is believed to have been from an elite British regiment that played a key role in the battle. The remains, discovered after a fortuitous find, form a remarkable archaeological puzzle experts are now trying to solve.

The 50,000 soldiers of both sides who died at Waterloo on June 18, 1815, were largely buried in mass graves. Chillingly, the bones of the fallen were plundered later in the 19th century and ground up to produce a type of charcoal used to purify sugar.

All of which is what makes the latest discovery – believed to be potentially the first British remains ever recovered from the battlefield – so extraordinary.

Previously, just two French skeletal remains have ever been recovered from the entire combat zone.

Belgium state archivist and historian Dr Bernard Wilkin last night told the Daily Express how these remarkable new discoveries were made. In August last year, he travelled to Waterloo, now in Belgium, to give a lecture on why there haven’t been significant finds of human remains.

“After I gave my talk an old man approached me and said, ‘I have a few Prussians in my attic’,” said Dr Wilkin from his office. “The old man said he wanted to give the remains back to the authorities.”

They were apparently discovered during building work four decades ago and given to the man, who owned a small museum. He thought it unethical to exhibit them, but kept the remains and gave one skull to a neighbour, who placed it on the mantelpiece.

Sure enough, the man produced boxes of bones and skulls which are currently being examined by experts. Early tests indicate they are the remains of Prussian soldiers who fought alongside the British in the battle for European supremacy.

“One of them was killed by a very hard blow to the face,” continues Dr Wilkin. “The skull shows heavy signs of violence. The front teeth were broken.”

At first, it was thought they were the remains of two Prussian soldiers, but now they think they have the remains of four or possibly more. As the find was not reported to the authorities at the time, there was no forensic dig that would have recovered more material.

However, in a further twist in the tale, the old man told Sheffield University-trained Dr Wilkin that he knew of a metal detectorist in Waterloo who had, illegally, dug up other remains.

This detectorist, who has not been identified, admitted coming across the bones at the Lion’s Mound – a huge, conical-shaped hillock today topped with the statue of a lion, which commemorates the Battle of Waterloo. When it was built, earth from the battlefield was used to create the steep-sided conical shape, so it is not surprising remains were there.

While it is illegal to disturb the site, it is unlikely any action will be taken against the individual.

This second discovery contained the remains of six soldiers and, crucially, included a metal badge indicating they were members of the Duke of Wellington’s elite 1st Foot Guard.

Dr Wilkin said: “It is a very important discovery as these are the first remains of British soldiers to be found. It is thought one of six may have been killed by a cannonball. There are signs of brutal death.

“Initially, we were told there were four British soldiers, but there were too many bones from the legs. It is a real puzzle when you look at them laid out on a table. Broken bones go in all directions. But there are two tops of skulls and there is one complete jaw.”

Experts believe that over the years other private collectors of military history have found bones and kept them for private collections and will never hand them over. Tests will be undertaken to see if the large piece of jaw can be matched with either of the partial skulls. If that can be done, it may even be possible to create a facial impression of what the soldier looked like.

The thought of recreating the features of a foot soldier from one of the most famous battles ever fought has sent shivers down the spine of historian Dan Snow, who is involved in the project. “It is extraordinary that we may be looking at people who changed the course of European history,” says Dan, who is featuring the remarkable finds on his
popular History Hit podcast series.

“Napoleon’s old guard had never been defeated in battle before. He sent them to destroy Wellington’s army before the Prussians arrived to give support. The battle was hanging by a knife edge. Napoleon’s plan was to blast the British off a ridge and then mop up their shattered remnants. Wellington had his men lay down behind the hill. He was always very cautious with their lives. When the onslaught started, the British held their line. It was a thin red line but they stayed and fought.

“You think about those men who fought and got hit by cannonballs and musket balls and were clubbed or stabbed to death in the mud. These discoveries will re-centre our thoughts about what happened on the battlefield and remind us of what happened on that bloody day.

“The French couldn’t break through and retreated down the hill. Napoleon’s empire ended right there and then. His army turned and ran. It is exciting to think we may have remains of men who fought on that ridge.”

The bones are now being examined by Caroline Laforest at the Royal Belgian Institute of Natural Sciences. Based on objects found with the bodies, at least one of the British casualties was a soldier of the 1st Foot Guards. An iron cannonball was also discovered with the bodies.

After resting in an attic for more than 40 years, all the remains are now in the possession and care of the Belgian State Archives in Liege.

A number of the Prussian soldiers’ bones bear witness to the brutality of the close-quarter fighting for the possession of the village of Plancenoit.

Several vertebrae show marks from bladed weapons, one skull bears horrific damage caused by a bayonet thrust or sword blow, while one front tooth seems to have been driven upwards into the jaw by a hard blow.

Forensic and anthropological work is being conducted and, in the near future, the bones will undergo DNA testing and strontium-isotope examination in the hope of confirming their national identity. Facial reconstruction will be attempted by Belgium’s criminal forensic services.

Up until now, no remains of Prussian or British soldiers have been found.

Much forgotten today is the fact the Battle of Waterloo was ultimately decided by the timely arrival of Prussian forces and the subsequent fierce battle for Plancenoit on the French right flank.

Although Waterloo was a terrible defeat for Napoleon, it didn’t spell the end for the French. Fighting continued into September 1815 when the final Bonapartist fortress surrendered to Prussians under Prince Augustus.

The Napoleonic Wars ended after the Second Treaty of Paris, on November 20, 1815. Dan Snow has been obsessed with Waterloo since he was a schoolboy and cannot wait to see if the remains provide a tangible link to what he sees as the most famous battle in history.

“Now that we have Britons from this battle, this is incredibly important and exciting,” he says. “You think of the painting of Wellington up on his horse, but now we have remains of those who were in the battle.”

If DNA can be extracted from the teeth of the British soldiers it may be possible to find descendants. Lists exist naming troops who fought in the battle.

Dr Wilkin is open to discussions from anyone in the British Army who feels the remains should be returned to Britain. It is also possible they could be reinterred where they were found, by the Lion’s Mound, a proud symbol of British bravery. 26 Oct 21
ARE you one of those adventurers who believes there ain't no mountain high enough? Then…
Lifestyle
0