"When you win, bring it back to Malibu because I'll feel much better knowing there's a piece of me here."

One of Sean Penn’s Oscar statuettes has a new special home.

On Tuesday, Ukrainian President Volodymyr Zelenskyy revealed the two-time Oscar winner gave him one of his trophies as “a symbol of faith” and support amid Ukraine’s ongoing conflict with Russia.

As shown in a moving video shared to the 44-year-old leader’s Instagram account, Penn can be seen meeting with Zelenskyy in Kyiv, the capital of Ukraine. During the meeting, the 62-year-old actor — who won the Academy Award for Best Actor in 2004 and 2009 — brought out an Oscar from his backpack and handed it to the president of Ukraine. 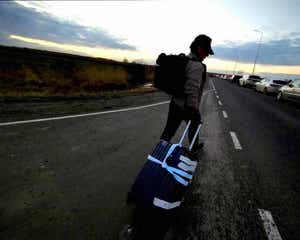 “It’s just a symbolic silly thing, but if I know this is here with you, then I’ll feel better and strong enough for the fights,” Penn said to Zelenskyy. “When you win, bring it back to Malibu because I’ll feel much better knowing there’s a piece of me here.”

The clip also showed Zelenskyy presenting Penn with an Order of Merit medal. In addition to the award, Zelenskyy also had another honor for Penn. As seen in the video, he took the “I Am Sam” star outside, and revealed a plaque in the ground that displayed his name.

Zelenskyy reflected on the “special” meeting with Penn in the post’s caption.

“American actor and film director Sean Penn @seanpenn came to Ukraine for the third time during the full-scale war already,” he wrote. “This time our meeting was special. Sean brought his Oscar statuette as a symbol of faith in the victory of our country. It will be in Ukraine until the end of the war.”

“It was with great pleasure that I presented Sean Penn with the Order of Merit of the III degree,” he added. “Thank you for such sincere support and significant contribution to the popularization of Ukraine in the world!”

Zelenskyy also shared another post that featured photos from his meeting with Penn, including a photo of them posing by Penn’s plaque.

“The Walk of the Brave is a place thanks to which present and future generations of Ukrainians will remember those brave people who have stood with Ukraine from the very beginning,” Zelenskyy captioned the post. “Next to the names of many world leaders who helped Ukraine during the war, there is a name plaque of Sean Penn.”

“@seanpenn visited Ukraine on the first day of the Russian invasion to document the events in our country and tell the world the truth about Russian aggression,” he continued. “Such support for Ukraine and its people is extremely valuable.”

Russian President Vladimir Putin launched the country’s invasion of Ukraine in late February. Penn was in Kyiv at the time to shoot a Vice Studios documentary about the invasion.

He was photographed attending a briefing at the Ukraine presidential office.

In a translated statement, per Fox News, from the President of Ukraine’s Facebook page, they hoped the Hollywood star would “tell the world the truth about Russia’s invasion of our country.”

They also said: “Sean Penn demonstrates the courage that many others, including Western politicians, lack. The more such people in our country now, true friends of Ukraine, who support the struggle for freedom, the sooner it will be possible to stop Russia’s treacherous attack.”

The Russo-Ukrainian war has displaced millions and the civilian death toll continues to rise.