Some of the greatest works of science-fiction voyage deeply into psychological drama, presenting the mind as every bit a mysterious, vast, lonely and unknowable a place to explore as outer space.

This adaptation of Stanislaw Lem’s 1961 novel hinges on theatrical embodiment of that metaphor, and is a worthy companion piece to the ambitious reworking of Lars von Trier’s Melancholia at the Malthouse last year (also starring Leeanna Walsman). 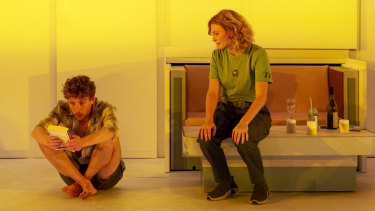 Where the rogue planet in Melancholia elides depression and an existential threat to humanity, the exoplanet Solaris is a watery enigma that seems to manifest past trauma.

Three scientists on a remote space station orbiting the planet have experienced strange “visitors” emanating from it. The dead seem to come to life.

Psychologist Dr Kris Kelvin (Walsman) arrives to investigate after the apparent suicide of her mentor Dr Gibarian, who is played in video diaries by Hugo Weaving with urbane humour and intellectual intensity, like some idealised blend of scientific genius and everyone’s favourite uncle. 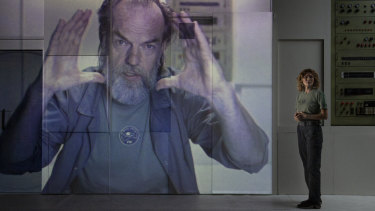 On the station, Kelvin encounters a girl who shouldn’t be there (Flora Feldman/Marlia Chofor), and her ex-lover Ray (Keegan Joyce), who drowned at sea.

What’s going on? Is this eerie oceanic world an alien consciousness? If so, is it malign or seeking to communicate? Or are the scientists simply losing their minds? 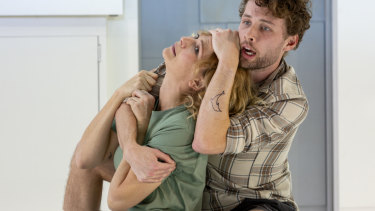 Paul Jackson’s lighting drenches the stage in artificial light, leaving the characters nowhere to hide, and suffuses it with a lurid palette, evoking spectral emissions from the star system Solaris orbits.

Jethro Woodward’s soundscape juxtaposes the enormity of space and the smallness of humanity. Vertiginous projections of ocean make you feel (a bit terrifyingly) that you’re about to fall in. 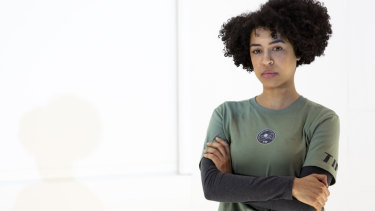 This thrilling theatrical setting isn’t always matched by an emotional one. Walsman is not credible as Kelvin – not because of her character's gender rewrite but because she loses it mentally from the start. It's at odds with a character trained in the mind and its horrors; instead, she dissipates into hysterical space opera.

The others fare better. As the alien presence and lost love, Joyce possesses a dreamy beauty, easy to objectify, that catches enough uncanniness to unsettle. Simbo’s Dr Snow holds the stage in an underwritten role, but it’s the saturnine clarity of Ogugua as Dr Sartorius, whose rigid adherence to scientific method is laced with bitterness and grief, that nearly steals the show.

This is an entertaining production, and if I’d seen it as a teenager I’d think it was the bee's knees. But Solaris betrays Lutton as a director who can superlatively command design while sometimes struggling to help his actors achieve the same power in performance. 15 Nov 21
The live-action adaptation of Cowboy Bebop hits Netflix on Nov. 19, and it will finally…
Lifestyle
0