The call of the male robust bleating tree frog in eastern Australia is hard to miss, especially when it is on the prowl.

It may be only 4cm in length, but its mating call is described by Australian Museum’s frog expert Jodi Rowley as among the most “hideous” of the “hideous frog calls”. 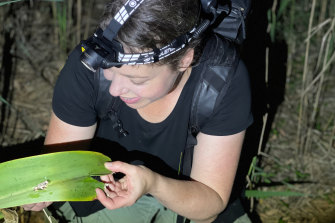 Dr Jodi Rowley with a screaming frog she spotted on the Central Coast on Sunday. Credit:Tandy Rowley

So awful that even Dr Rowley, who listens to thousands of frog calls every year as lead scientist of the citizen science FrogID project, finds it difficult to stay in its presence. She even recalled reading about the bleating frog as a child. “Its call is painful in both pitch and volume,” she said.

Thanks in part to recordings of frogs by citizen scientists, Dr Rowley and others have discovered that the bleating tree frog (litoria dentata) is not one species but three.

Given that the frog is well documented in NSW and Queensland that was a surprise. “We had frogs under our noses … And we didn’t know the difference, that’s ridiculous,” she said.

According to research published on Monday in the international journal Zootaxa, the two new species look and sound slightly different.

The research was conducted by Dr Rowley with South Australian Museum’s Professor Steven Donnellan, the University of Newcastle’s Professor Michael Mahony, called the frog whisperer, Queensland Parks and Wildlife’s Harry Hines and others.

The paper says the call of the newly described slender bleating tree Frog (litoria balatus) is shorter and the highest in pitch of the three.

“The smaller the area, the more that bushfires or anything could wipe it out,” she said.

Frogs are among the most threatened groups of animals, and the purpose of FrogID is to get a better understanding of their numbers, where they live, and how to protect them.

Dr Rowley said scientists had been worried the habitats of these noisy tree frogs may have been wiped out by the 2019/20 bushfires. Now they know there are three species, which are located in three distinct areas in NSW and Queensland, that means they are more vulnerable to threats because they each cover a smaller area.

In contrast, the males are easy to find and hear. “They’re often sitting out on the pond, screaming their hearts out like these little guys (the litoria),” she said.

Many of the calls of the newly identified species were recorded by members of FrogID. The program has contributed to the identification of six new species with a healthy following on its Facebook page, where users swap sightings, tips and comment on how different frogs sound.

A video of a crucifix frog (notaden bennettii) bobbing up and down attracted thousands of likes, and more than a hundred comments. It sounded like a “bubbly fart”, said one member, or the noise “woop” or pigeons, said others. Another called it “chunda down under frog”.

Genetic work provided the first clue to identifying the tree frogs, said co-author Professor Donnellan. “Although similar in appearance, and in their piercing calls, the frogs are genetically very different … I’m still amazed that it’s taken us so long to discover that the loudest frog in Australia is not one but three species.”

25 Nov 20
For the first time in 800 years, stargazers will be able to witness a spectacular…
Lifestyle
0 8 Feb 21
Breaking hearts can be fun!To help the broken-hearted heal this Valentine's Day, Save the Chimps…
Lifestyle
0