Students across Victoria will return to remote learning on Wednesday, with tighter exemptions for children of essential workers than the government imposed last lockdown.

The limits on face-to-face teaching will be enforced across the state following a final day of on-site classes on Monday for year 11 and 12 students and a pupil-free day on Tuesday. 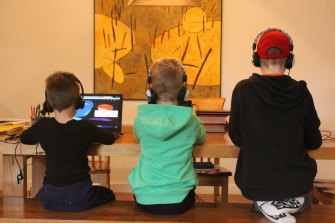 Students will return to remote learning on Wednesday under the stage four lockdown.Credit:James Thomson

In a change from the first lockdown period, childcare centres in Melbourne will also be closed to most families, with only vulnerable children and the children of "permitted workers" allowed to attend.

The new settings will apply for six weeks, covering almost all of schools' term three, which is to end on September 18.

Exceptions will apply to vulnerable students and children of permitted workers, and to specialist schools in regional Victoria, which will remain open as normal.

The Andrews government did not define "permitted worker" on Sunday when it announced the new restrictions, committing to release a list on Monday.

But Premier Daniel Andrews suggested the list of such jobs would be tighter than last time.

"The children, the students of parents who are working, they will be able to go to school and be supervised, but it will really only be those that are absolutely necessary to do so," Mr Andrews said.

Year 11 and 12 students, as well as year 10 students studying VCE and VCAL subjects, in Melbourne and Mitchell Shire have been attending face-to-face classes this term, while all other year levels are being taught remotely.

The move to remote learning for all year levels comes after about 100 schools in Victoria were forced to close due to being linked with cases of COVID-19.

On the weekend, education interest groups including Parents Victoria and the Victorian Student Representative Council, which is mostly comprised of VCE students, called on the government to abandon face-to-face classes for year 11 and 12 students.

The student council said hours before the shift to remote learning was announced that it was "increasingly concerned about the impacts to learning – as well as the mental and physical health of students, teachers, school staff and families – as schools across the state close and open with little notice due to COVID-19 cases".

The Independent Education Union, which represents staff in non-government schools, supported the move to remote learning, saying there had already been too much disruption during term three in schools that experienced cases.

"We have done it before and we can do it again," secretary Deb James said.

Education Minister James Merlino said VCE exam dates would not change because of the shift back to remote learning for senior students, and that year 12 graduates would receive their Australian Tertiary Admission Rank before the end of the year.

Mr Merlino said this would ensure Victorian students received their results at the same time as interstate ones.

"There is a two-week window across the country where ATARs are delivered, so we will be in step with every single state and territory," he said.

But the General Achievement Test – a key part of VCE assessment – will be delayed until early in term four, having previously been pushed back to late in term three.

There will also be "big changes" in early education and at specialist schools, the Education Minister said. "Most young kids will be at home," he said. "The only kids on-site will be those of defined workers or very vulnerable kids"

Regional early learning centres will be open as normal.

Specialist schools in Melbourne, having been open so far this term at the request of parents, will close again, other than for vulnerable students and the children of permitted workers.

Get our Coronavirus Update newsletter for the day’s crucial developments at a glance, the numbers you need to know and what our readers are saying. Sign up to The Sydney Morning Herald’s newsletter here and The Age’s here.