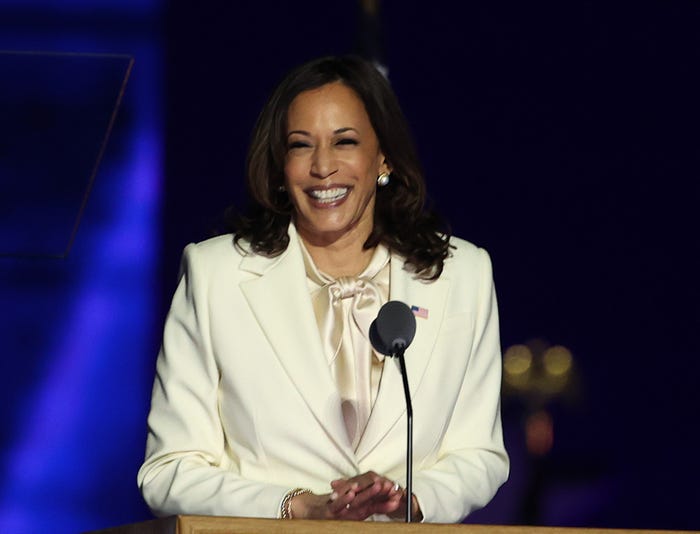 When Jessica Butler Bell watched Vice-president elect Kamala Harris take the stage last weekend, it was a personal moment— not only because Harris will be the first woman vice president. She's also one of the highest-ranking officials who has openly discussed being a step-parent.

For Butler Bell, stepmother to two grown sons and co-founder of Raise Magazine, Harris did everything right by embracing her step children, Cole, 26, and Ella, 21, in her speech.

"She stood on the national stage in her acceptance speech and said, 'I'd like to thank Doug and our children,'" Butler Bell said. "With one word, she elevated the role of stepparents in this country. She told the world that stepparents are parents too."

Despite the fact that blended families are more common than ever, step moms are still stigmatized, Butler Bell said.

"It's meaningful to me any time a public figure communicates openly about being a parent of any type, but having someone be positive about being a step-parent specifically is wonderful," she said.

Harris offers an example of a healthy blended family

Not only is Harris a step mom, she also provides an example of a healthy blended family.

"To know Cole and Ella is to know that their mother Kerstin is an incredible mother," Harris wrote for Elle last year. "Kerstin and I hit it off ourselves and are dear friends."

"Having a positive stepfamily model representing America is extraordinarily powerful," she said. "It's not just that she's a stepmom, it's that her family serves as an example for how to peacefully blend."

Altemus was touched not only by Harri's relationship with her stepkids' mother, but her determination to always be there for the childrens' events, including Ella's swim meets and basketball games, where Harris said she cheered alongside Ella's biological mom.

"I appreciate how she has described her particular situation with an acknowledgment of how fortunate she is to relate well to her stepkids' natural mom," Altemus said. "I saw that in Harris' desire to attend her stepkids' events and her disappointment when she was not able to be there. Her love for her stepkids is clear and public, and it reminds me of my own."

Harris is 'Momala' to her kids

When Harris married Dough Emhoff in 2014, she quickly became "Momala" to Emhoff's two children. Since then, Ella has spoken out about her high-profile step mom.

Ella also reflected on how her stepmom's ascent to the highest political office a woman has held also affects her.

"It's super exciting and it's amazing that a woman of color is on the ticket. It's groundbreaking," she said. "But I think it was also that intense wave of realization and anxiety that, 'Wow, I'm not looking at this from the outside. I'm looking at it from the inside. This is all happening to me too.' I felt extreme love and excitement, but also a little bit of shock."

A new inspiration for stepmoms

In her speech and elsewhere, Harris refers to Ella and Cole simply as her children. That's something that Altemus hopes will be adopted more widely.

"Step-parenting is so often viewed as 'not real parenting,'" she said. "We often feed that ourselves, I think, in our efforts to help kids handle our arrival into their lives; we look to reinforce that our intent is not to replace but to supplement, so we use language around it to emphasize a difference between 'real' and 'step' parents. The line is so often blurred though, particularly in cases of conflicted relationships or absent natural parents."

"I'm thrilled to have a woman of color as VP. That she is also a step-parent who expresses what she does about her family role is a bonus," Altemus said.