If you found yourself bawling your eyes out while listening to a specific song in Disney’s latest movie Encanto – that probably means you’re the eldest sister in your family.

The song in question is called Surface Pressure, and it details the underlying stresses and anxieties the character Luisa Madrigal experiences as the big sister – and the crushing responsibilities that come with this role.

‘Give it to your sister, your sister’s older,
Give her all the heavy things we can’t shoulder,’ Luisa sings.

‘Watch as she buckles and bends but never breaks
No mistakes.’

The song has got people in their feels.

Older sisters are quoting the lyrics on TikTok and Twitter, taken aback by how hard they relate to this message, many realising they had never really been aware of the pressure they felt until now.

Aiysha is the oldest daughter with four younger siblings, and she says she has felt the burden of responsibility since childhood, and it still persists even though they are now all adults.

‘I have been like a second mother to my four siblings,’ Aiysha tells Metro.co.uk.

‘Even in adulthood, when making decisions I was always taught think of my siblings, to the point where my dad didn’t let me go to university until I was 21 because he didn’t want me to move out.

‘He said, “what about your siblings – you have a responsibility to them as you’re older. You need to be here to set an example.”

‘Now, anytime there are issues at home, I always get a call to fix it. It’s ingrained in me to be always be available for them. Even in adulthood it comes with a lot of responsibility.

‘It was so bad that for the longest time I thought I didn’t want to have children and I didn’t know why – but I later realised it’s because I felt like I had already raised four children, my siblings.’

It’s not always this extreme for older siblings – not everyone experiences the same kind of pressure from their family.

PR executive Victoria Gill, is the eldest of four. She says the role definitely comes with a greater sense of responsibility than her siblings have, but says they all have different roles to play.

‘When we were younger and all lived together, I found myself worrying a lot about them and I took their problems under my wing.

‘You naturally adopt a “mother-like” persona. I’m not particularly maternal, but I think this instinct creeps up on you.’

She says it’s easier to talk about these issues now they are adults, and the dynamic continues to change as they grow up and get their own lives.

‘We’re all very close, so we work through any problems as a bit of a unit now we’re older,’ Victoria adds. ‘It’s interesting as we each bring something different to the table. When I was younger I did feel like I had to be the strong one though, but this has changed a little over the years.

‘I do think that protective, maternal instinct is very much there though and it’s just something you have ingrained in you being the oldest.’

Reacting to the Disney song on Twitter, one woman wrote: ‘”Surface Pressure” is a really sad song and as an older sister it hurts.’

Another said: ‘I dare any older sister to listen to Surface Pressure from Encanto and not tear up. I’ll wait.’ 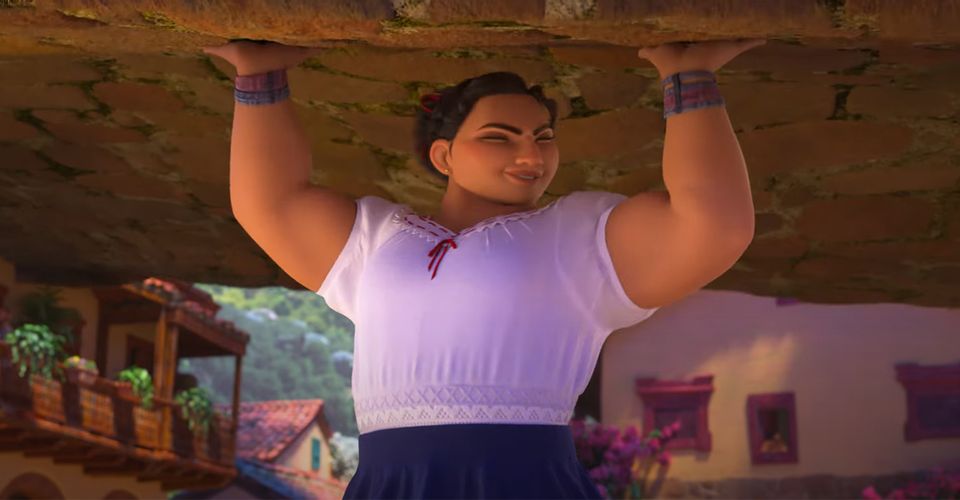 But why is this song capturing such a universal feeling?

What is it in the way we operate as family units that leads so many eldest daughters to feel like this, and to carry so much on their shoulders?

‘Eldest sisters will have spent at least a small portion of their lives as only children, and as such have largely had adults, and particularly their mothers, to model their behaviours on,’ Caroline tells Metro.co.uk.

‘Even today, women are still typically seen as the family caregivers, and if the mother is incapacitated for whatever reason, expectation can fall on the eldest child to step in to her role.

‘It’s also not unheard of to hear parents say that they delegate some of the responsibility of looking after their youngest children to their oldest child.’

Caroline says this kind of expectation can lead to very real, adult pressures and anxieties at a young age, that can then knock on into the rest of our lives.

‘It can also result long-term in a lack of boundaries and a tendency toward people-pleasing behaviours as eldest sisters believe it is their job to be responsible for everybody else’s wellbeing and happiness,’ she explains.

She says it is vital that healthy boundaries are developed.

‘This does not mean never lending a helping hand, but it does mean being able to kindly but firmly say “no” to things that aren’t your responsibility and that leave you feeling emotionally and/or physically drained,; Caroline adds.

‘It also means not consistently neglecting your own wellbeing, or your own needs, in order to prioritise everyone else’s. Be confident in ensuring you get your own needs met and ask for support if necessary.’

There’s a cultural element to this phenomenon as well. Encanto is about a Columbian family, and speaks to specific family dynamics and expectations that are specific to Latin cultures.

Different cultural influences impact how your place and role in your family is viewed, and many children of immigrants living in the UK say this pressure to do well and be a ‘role model’ is exacerbated for eldest siblings.

‘I’m the eldest of four and I do feel as though there is a major burden,’ says account director Whitney.

‘My family is from Haiti and I was always pushed to do and be the best in school and my personal life, which has led to a debilitating sense of perfectionism and fear of failure.’

Whitney says that when she sees her younger siblings having more freedom and flexibility than she ever did, it does sometimes lead to resentment.

‘It’s likely because my parents got older and were tired, but as a result my younger siblings have such confidence and willingness to try new things and potentially fail,’ she adds.

‘Interestingly enough, it also feels like my parents have become more emotionally aware, which has benefited my younger siblings. I didn’t get any of that – for me it was – keep your feelings to yourself.’

Of course, family dynamics can be tricky for everyone – no matter your age, or relationship to your siblings. The angst-ridden plight of the middle child has long been discussed, and youngest siblings can feel overlooked, forgotten about or second-best.

Beth Greer owns an interiors business and is the eldest in her family, with younger sisters. She says being the eldest comes with advantages as well as the responsibilities, and she feels for her younger siblings too.

‘I’ve always been sensible, quiet, the “good” girl, however I’ve always felt that it is unfair to my sisters as it infers that they are not as “good” – which isn’t the case.

‘I feel the role of an elder sister is to look out for them, give advice to try to guide them in them making the right life choices, and at times having experiences on their behalf to protect them.’

Beth says, growing up, she and her sister were treated quite differently by family members.

‘I was trusted, whereas my sisters were treated like they were naughty (they weren’t, they were just more curious than I was).

‘I always had a more grown-up relationship with my mum from a young age, due to having a mature head on my shoulders, meaning I wasn’t as shielded during my parents divorce, I saw a lot more of the arguments than my younger siblings did. A lot more was hidden from them.

‘As adults I still feel that sense of protection of them, its hard to let that go and watch them make their own choices. Not because I’m a control freak, but because I can see at times they haven’t chosen what’s best for them or valued themselves more. I’ve had to learn that advice given isn’t always taken, but we have to be OK with that.’

How to set boundaries and cope with eldest sister anxiety

‘It’s a parents natural behaviour to ask the eldest to help the younger children because they are capable of doing things at that time the younger siblings may not be,’ she explains.

‘It can have both positive and negative long-term effects on the eldest children. The negative effects may be that eldest child always feels there is pressure on them to make sure younger siblings are OK, and the positive effects can also be the same.

‘It really comes down to how each individual interprets this feeling and pressure as for some it will help them thrive – and for others it may feel like a burden.’

Here are Rebecca’s top coping mechanisms for eldest sisters to deal with this pressure, to help them realise that they don’t have to take on every family burden as their own:

‘It can sometimes feel as though it is down to you to make sure everything and everyone is OK.

‘Sometimes you may enjoy helping and being there for others, sometimes it may also become too much, so be aware that it is not always your responsibility.’

Be kind to yourself

‘Don’t put too much pressure on yourself and always be kind to yourself.

‘Make sure you put yourself and your needs first. When you are OK and filled up, it is much easier to help others too.’

Put boundaries in place for yourself

‘Ensure that you are putting boundaries in place for yourself and checking in with you.

‘What do you want, what makes you feel good and what leaves you feeling like everything is OK. Do this first, and try not to always react when others need you if you need yourself first.’

You don’t have to be the fixer

‘Sometimes, just a listening ear is what someone needs.

‘It can be easy to fall into the habit of feeling as though you need to ensure there is an answer or a solution for everything, but sometimes it is a lot more powerful just to listen and be there.’

19 Sep 19
A "clumsy and forgetful" student had to fork out £700 to replace phones, driving licenses,…
Lifestyle
0