The Attorney-General’s department has confirmed religious schools’ right to sack teachers for their views on sexuality under the federal government’s revised Religious Discrimination Bill and signalled protections for LGBTQI students will be delayed.

A parliamentary inquiry into the bill also heard many teachers whose lifestyles diverged from strict doctrine upheld by the religious schools they worked for feared losing their job and had experienced discrimination. 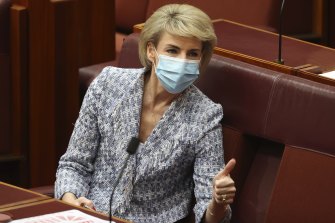 In a submission to the inquiry, Michaelia Cash’s department said the new law “would allow a religious school to consider a person’s religious beliefs about issues such as sexuality” if it is part of its religious “doctrines, tenets, beliefs or teachings”.

The department also signalled changes to the separate Sex Discrimination Act aimed at safeguarding LGBTQI students – reportedly agreed to by Prime Minister Scott Morrison in exchange for four moderate Liberal backbenchers’ support of the religious discrimination bill – would be delayed.

The Religious Discrimination Bill would not affect the operation of the Sex Discrimination Act, the department wrote, with existing exemptions for religious schools to remain intact pending the outcome of an Australian Law Reform Commission inquiry, due to report back 12 months after the bill passes.

Section 38.3 of the Sex Discrimination Act, which the backbenchers want removed, allows religious schools to discriminate against another person because of sexual orientation, gender identity, marital or relationship status or pregnancy.

Mr Morrison wants the Religious Discrimination Bill to be passed before the election, but religious schools, teacher’s unions and advocacy groups remain at loggerheads over the reform.

Association of Heads of Independent Schools of Australia chief executive Beth Blackwood told Thursday’s hearing that while the organisation supports the “move to protect religious freedom in Australia … we don’t fully support the bill in its current form”.

“We are concerned about social cohesion,” Ms Blackwood said, calling for the establishment of a religious discrimination commissioner ahead of, and separate to, the bill’s passage, as “an opportunity for more dialogue” around issues like how to define a statement of religious belief.

Leaving this question to the courts would only continue “to politicise religious freedom”, she said.

The Sydney Anglican church in its submission defended the Christian school reported to have sacked teacher Stephanie Lentz for her belief “that a person can be Christian and gay”, saying this was not the same as terminating her employment because of her sexuality.

Australian Catholic Bishops Conference president Archbishop Peter Comensoli told the hearing parents wanted their children to receive “a good education in the context of Catholic faith and culture” and that schools must remain free to employ staff “in accordance with the ethos of the organisation.”

Independent Education Union assistant federal secretary Christine Cooper said many teachers whose lifestyles were at odds with the doctrine upheld by the religious schools they worked for were living in fear.

In its submission to the inquiry, the union revealed that a survey found almost a third of teachers at Catholic schools and one-sixth of those working at independent schools had experienced discrimination related to their marital, relationship or parental status.

One teacher reported being denied time off to care for, and then grieve, their dying partner, while others described being discriminated against over their single parent status, decision to undergo IVF or return to work months after having a baby.

Teachers with same-sex partners or who identified as LGBTQI said they were pressured to hide the truth about their personal lives.

“The element of fear that exists in our schools can’t be ignored, in these schools where employers seek to use discriminatory practices,” Ms Cooper told the hearing.

Employer peak body AI Group said in a submission to the inquiry the revised bill was an improvement on earlier drafts, but further changes were needed to ensure employers could “maintain appropriate standards of conduct in the workplace”.

The bill in its current form would not allow employers to “address any inappropriate workplace conduct engaged in on the basis of an employee’s religious belief and activity”, such as unwelcome proselytism in the workplace, the submission said.

“Section 39 in the bill should be amended to enable employers to take reasonable management action to deal with unreasonable religious activity in the workplace,” AI Group chief executive Innes Willox said. 5 Jul 19
TheMoscow metro, one of the busiest metros in the world, isknown for its efficiency and…
Lifestyle
0